Rebecca got her hand in Téo’s curls, and was doing that twisting-pulling thing that felt like sex. Dax snapped the scissors close to his ear, making him jump. Mikey was doing something slithery and twisty in his front hole. Damn, her paw was big. He wanted it inside him so bad, punching into his cervix with those powerful huge arms. Why was she going so damn slow? He was all-over impatient.

That’s when Dax began to cut into his perfect dress. He started to pull at the ropes, glaring at Dax, who seemed to get even bigger and more excited the more he glared. Xóchi and Lee began to pull at the tears Dax was making, and the fabric made a wet, almost breaking sound as they ripped it. Somehow, Téo was sobbing. Rebecca was stroking his hair, gathering him to her breast, and Mikey slid deeper into him and stilled.

Dax met his eyes, and he was held in the demand and witness of someone who got it. Got how helpless he needed to be, and how much he needed to let go, and how tender and new he was inside, and how scary it was to let others know that. Dax placed the scissors on his bare stomach, holding them firmly against him. They were cold and warm at the same time. How was that possible?
Dax reached over and stroked Téo’s cheek, lifting hir fingers to suck off his tears. Ze repeated Mikey’s question. “I’ve never seen anything quite like it before. I wonder what it is?”

This time, he could say it. “I am a tender sweet young thing.”

Mikey pulsed her hand inside him, and he moaned, repeating it, and getting rewarded by more twisting-pulsing yum that made his thighs quiver.

Lee and Xóchi growled, nuzzling his side. Rebecca stroked his curls, emerging with ribbons that she put in her own hair. He was getting stiff, and he wanted to move, so he said it: “Untie me this instant. My dress is getting mussed!”

They all chuckled and began untying him. Mikey stayed where she was, writhing her fingers inside him.

“So, you want to be free for this, eh? That sounds perfect,” she said.

“Oh yes,” he said and used his newly free hands to shift position. He knew if he hit the right spot, oh yes...her hand slurped in, and she grinned at him.

The rest of the tigers began to nuzzle his belly, and neck, and thighs. Mikey went to work in his hole, pulsing, then twisting, still going way too damn slow for him, and he told her so, began to work with her, thrusting on to her fist, telling her to punch him deep inside, he could take it, he wanted it, her fat fist was exactly what he needed. She caught on real fast and began slamming into him just right, and he lost control of his muscles and just let her take over. He was impaled on her huge and perfect fist, and he could feel it build in his chest. Damn…did he really need to cry again?

It seemed that he did, and as he began to sob, five tigers chose their spots and bit. Dax chose his belly, the soft part of him, the place where he was most tender. Rebecca went after his neck, sucking hard on the bite, wanting him to remember her teeth for days to come. Xóchi chose the inside of his arm, and that hurt the fucking worst. Damn, she was evil in the best way. Mikey bit down on the heel of his hand as she came because he felt so damn good spasming around her fist. Lee chose his thigh, and it mixed in with the sex to push him over into a sobbing orgasm that spiraled through him until he was spent. They all bit down and savored the sweetness of him, feeding on his tears, past his pleasure, until they were sated.

More information about Show Yourself To Me:

In Show Yourself To Me: Queer Kink Erotica, Xan West introduces us to pretty boys and nervous boys, vulnerable tops and dominant sadists, good girls and fierce girls and scared little girls, mean Daddies and loving Daddies and Daddies that are terrifying in delicious ways.

Submissive queers go to alleys to suck cock, get bent over the bathroom sink by a handsome stranger, choose to face their fears, have their Daddy orchestrate a gang bang in the park, and get their dream gender-play scene--tied to a sling in an accessible dungeon.

Dominants find hope and take risks, fall hard and push edges, get fucked and devour the fear and tears that their sadist hearts desire.

This is Show Yourself To Me. Get ready for a very wild ride. 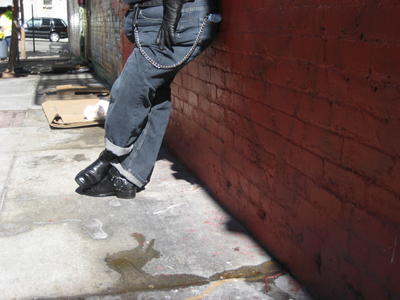 Xan West is the nom de plume of Corey Alexander, a recent transplant to Oakland from Brooklyn, who has been doing community kink education for over ten years. Xan has been published in over 35 erotica anthologies, including the Best S/M Erotica series, the Best Gay Erotica series, and the Best Lesbian Erotica series. Xan’s story “First Time Since,” won honorable mention for the 2008 National Leather Association John Preston Short Fiction Award. Xan’s work has been described by reviewers as “offering the erotica equivalent of happy ever after” and as “some of the best transgressive erotic fiction to come along in recent years.”

Follow the blog tour for Show Yourself To Me:

Seriously, your collection is amazing. I'm working my way through slowly. Each story is like a punch in the gut. "The Sweet Young Thing" is one of my favorites so far, though, very different in tone from some of the darker tales.

Hope you're getting lost of exposure from the tour. Thanks for being my guest.

Xan is an amazing author, whose stories both challenge and satisfy. Not, however, for the squeamish!