Thank you, Lisabet, for once again hosting me on your blog. I’m happy to be back here.

I’m sitting here, writing this, with my leg propped on a carton of wine, an ice pack on my knee, and painkillers coursing through my blood—I had a minor (if painful) knee operation today. However, the thing uppermost in my mind right now is that enforced rest=more writing/editing time!

Time to write some shorts for anthology calls that I’m just itching to submit to. Time to read the many diverse submissions that have come in for my own anthology call, an anthology of first experiences with a lesbian theme that will be out later this year from Ladylit. Time to get into editing mode, not only for the anthology, but also for a novel I’ll be editing for Harper Bliss very soon. And time (I hope) to work on my novella-turning-into-a-novel that really has my fingers twitching to write.

Now all I need is a slave to bring me coffee or wine at regular intervals, feed me choice morsels, and bring me ice packs on demand (Dream on, Cheyenne!) Oh, and a cat. A furry little companion to snuggle with is always welcome. 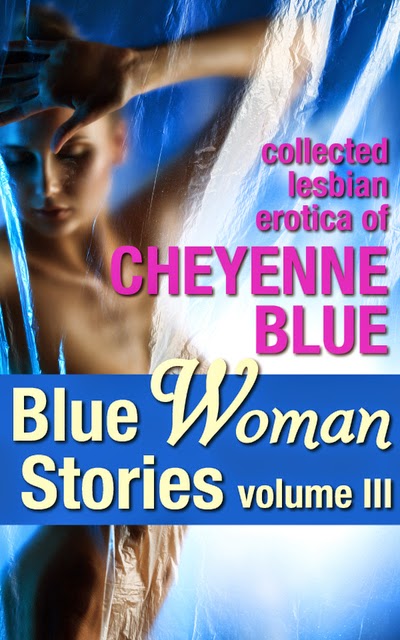 In A Story About Sarah, Melly tells the reader about her lover, the only other girl in a remote mining camp in outback Australia. She tells the story of their life and their love. Two of the other four stories are more transient encounters. In Carrowkeel, a tourist meets a New Age hippie in a prehistoric tomb in Ireland, in the second, Irish Abroad, an Irish tourist alone in Las Vegas has the chance to reinvent herself to a tough biker dyke. The remaining two stories catalog the start of relationships: an experienced nurse takes a student under her wing in Nurse Joan, and in Run, Jo, Run two women fall in love through their mutual passion of fell running.

I hope you enjoy this collection. Here's an excerpt from Irish Abroad to give you a taste of what awaits you.


Outside, the heat hit her as if someone had opened the oven door. After the dim cacophony of the casino, the sunlight lasered her retinas. Sweating pink tourists like herself passed in an endless parade, but every so often, there was what had to be a local, dressed in boot-cut Levis and western boots. Ros wished for that level of effortless assimilation into America.

Traffic crawled along the Strip: black limos with smoky windows, buses, and ordinary cars. And, weaving easily between the snarl of cars, was a rider on a shiny blue bike. The sunlight reflected off of the chrome, and the throb of the big engine underlay the whine of cars like a bass guitar. Ros paused to watch. Now that would be a grand memory for her holiday. Something to tell the girls back in Dublin. Maybe she could hire one tomorrow, ride out into the desert, and find a bar, a dark hole-in-the-corner type bar, straight out of a dime-novel western. Somewhere she could swagger in and order a cold one, open the bottle with her teeth and down it in one long swallow.

Right. And maybe she was coming down with heatstroke already. She took a look at herself, at the flippy mini skirt and flip-flops, at her fussy tee shirt that simply screamed "Irish gombeen abroad". She'd passed a boutique attached to one of the casinos a while back. Without stopping to reconsider, she wheeled around and headed that way. At least she could look the part.

The next day, head pounding after too many margaritas that weren't watered down, thanks to a judicious bribe to a cheery cocktail waitress, she exited onto the Strip in her new finery. Boot-cut jeans, so tight she'd likely split her difference if she sat down. The seam bit into her cunt and she guessed that her pussy lips were clearly outlined, under the tight denim. A check shirt, tight over her flabby abs and straining at the bust. And of course, a hat. A black one, with a studded hat band. She'd gone surreptitiously out to the hotel patio and scooped dirt from the garden, rubbing a light layer of it into the hat to soften its pristine look.

Confidently, she paraded the Strip, the new boots with their curved heels pushing her into a rolling gait. So that was why cowgirls walked the way they did. She heard the bike before she saw it. Again, that throaty throb of the engine, a lazy tickover as the rider threaded a way through the traffic. This time the bike came nearer, and Ros could see lean brown arms, big square-cut hands, and blunt fingernails. No helmet. The rider's short brown hair was plastered to her head, secured down by a red bandana around her forehead. The profile was strong and unmistakably female.

With a thrill, Ros saw the rider pull into the curb a few yards in front of her. The bike gleamed like a deep river of blue and chrome, not a sports bike, not a lowrider, simply a sleek speed machine, something she'd always dreamed of riding. There weren't many like that in Ireland.

Before she could lose her nerve, she strode over and tapped the rider on the shoulder.

"Great bike," she offered. "I saw you yesterday." She squinted at the symbol on the tank. "An Indian? I've never ridden one of those."

The woman turned to face her, and Ros saw amused blue eyes in a weather-beaten face. Laughter lines radiated out from those eyes, and there were fine smoker's lines around her mouth.

"Indeed. I have a Norton back in Ireland."

Blue eyes raked up her body, lingering on the way her buttons didn't quite meet over her breasts. Then their eyes glanced and held. The amusement faded, as a connection strung between them, a ping of attraction. For a moment, the buzz of the Strip faded away, and there was only this woman. And her bike.

"Maybe you know if there's somewhere around here I can hire a bike? I'm on holiday and I miss mine. Be grand to see some of the scenery too."

The stranger pondered. "There's a Honda dealer out on Tropicana Avenue. Maybe they hire. Or do you want a Harley like they all do?"

Ros moved closer, her confidence soaring from the new clothes and the look of appreciation on the older woman's face. She met her eyes firmly. "I want what you have." One white hand ran caressingly over the tank, down where it disappeared between lean thighs.

The woman stuck out a hand. "I'm Tash. Hop on, I'll take you out there. They don't make Indians any more, but we'll find you something."

[You can read my review of Cheyenne's first volume of Blue Woman Stories here. ~Lisabet]
Posted by Lisabet Sarai at 3:00 AM

I hope your knee is healing well. And yes, enforced quiet sometimes has its positive aspects.

BWS 2 and 3 are both on my tablet, and I'm looking forward to digging in.

Thanks for this, Lisabet and Cheyenne! I will throw in a hearty endorsement of Run, Jo, Run, which stands out in my memory of Girls Who Score (one of my favorite anthologies of all time—though I feel like I bestow that accolade rather liberally).

I hope you feel better soon! ::Runs to obtain book::

Thank you again for hosting me, Lisabet. I always love being here on your blog. I hope you enjoy BWS 2 and 3.

Thanks, Annabeth. I'm glad you enjoyed Run, Jo, Run. I'm certainly with you in my enjoyment of a good sports story. GWS was one of my favorite anthologies as well. So many very, very good stories included in that one.