As an author it’s all about the journey, not about where you are going, but how you get there. I started out 10 years ago as a stay at home mom of five. Writing took place mostly in the evening when the little ones were in bed. Why did I write? Well, because I had to, I needed to, it was a way to keep my sanity in a house full of kiddie chaos. I was inspired by an author whom I loved and read everything she ever wrote, Kathleen Woodwiss. I started out writing sweet and a little spicy historical romances, and as strange as it sounds saw my dream of being published in 2010 become a reality with my third ever manuscript. The strange part? That contract was followed by ones for my second manuscript and then my first, kind of a reverse play if you will.

The more I wrote the more I found myself wanting to explore more than just sweet romances. I dabbled with a short erotica and an all most over the mainstream line historical, The Courtesan, but never really attempted a full on erotic novel until 50 Shades Of Grey came out. I wasn’t inspired to write an erotica by the hype or the money, rather because (and I apologize if this offends anyone), I hated the series. Yes, I hated 50 Shades of Grey. I as a reader and an author had three major issues with the series; 1) A 21 yr old virgin in this day and age? Okay, not impossible, but highly unlikely. 2) The heroine had no driving force to sign a sex contract and to me a virginal curiosity just wasn’t enough. 3) What normal woman falls for a guy that screwed up??? I’m sure if the man wasn’t a billionaire no woman, or reader, would have given him a second look… and I don’t personally know anyone shallow enough to put up with creepy for money. So basically I wrote my own 95,000 word version of 50 Shades set in the regency period titled SINGED. 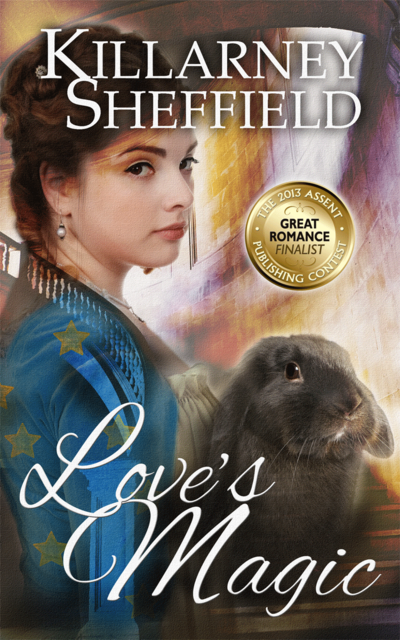 SINGED was supposed to release in May, however, due to the success of a couple of my historical romances right now, including a sweet one entitled, Love’s Magic, 2015 RONE award nominee, it has been delayed until fall. Until then how about a sneak, unedited peek at SINGED?

Well, before becoming a published author I used to be a natural horsemanship trainer, farrier and English & Western riding coach. I currently live on a Canadian cattle ranch with my family, though one day have dreams of seeing the world and moving to Australia. I am still as passionate about my horses as my writing but have to work hard to balance the two these days. Which is my greatest joy? Probably my registered Thoroughbred stallion 'Stamp de Gold' whom I lovingly refer to as 'Love Monkey'. In a horse person's life there comes that one very special equine who seems to know exactly what you want and what you are thinking. I have been blessed with 2 of those amazing creatures over my years of owning, training and showing, my dear departed 'Melderman' and 'Stamp de Gold'. For all those 'horsey' readers and authors out there I also have a blog dedicated to all kinds of horse info which you can find on my links page.

I do believe I will be purchasing singed when it comes out!! Is there a way of getting an alert so I can leap to Amazon??