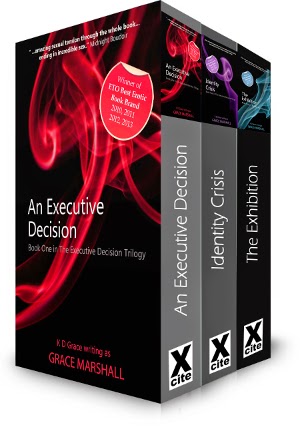 The entire Executive Decision Trilogy is now available in a boxed set! An Executive Decision, Identity Crisis & The Exhibition are all three now available in one intense, sizzling, yummy package from Amazon. If you liked Interviewing Wade, you’ll love The Executive Decision Boxed Set. Go ahead, indulge yourself with the rest of the story, and what a story it is! Here’s your chance to meet the rest of the Pneuma Inc inner circle and indulge in the sometimes funny, sometimes hair-raising, always steamy adventures of Dee & Ellis, Kendra & Garrett, Stacie & Harris as they battle their way to success, happiness and, of course love. The Executive Decision Boxed Set is a binge reading must for those who like an intense, fast-paced story with hot romance between characters who are more than up for the task.

Here’s what you get:

Overworked CEO Ellison Thorne has no time for sex, let alone romance. The only answer, at least where his retiring business partner Beverly is concerned, is a no-strings sex clause in her replacement’s contract, designed to make Ellis’ busy life easier – and hotter. But she’s joking, right?

When Dee Henning takes over Beverly’s job, sparks fly between her and Ellis, but work takes priority in driven Dee’s life too. Can one night of passion in a Paris hotel room prove Beverly’s Sex Clause is their secret to success in the boardroom and the bedroom, and what will happen if that private clause becomes public knowledge?

This romantic suspense novel is recommended to hopeless romantics who know love triumphs over all.

Tess Delaney is the hottest property in romantic fiction, but the reclusive Tess has a secret – she’s really the alter ego of Garrett Thorne, bad boy brother of business tycoon Ellison Thorne. When Tess is nominated for the Golden Kiss Award, Garrett recruits PR specialist, Kendra Davis, to keep his secret and be Tess for the awards despite their mutual animosity.

Hatred turns to scorching passion, but when Tess is stalked by a rabid fan, an identity crisis is eclipsed by a battle for survival. It seems Tess, the woman who doesn’t exist, just might understand Kendra and Garrett’s hearts better than they do.

The Exhibition – Book Three in The Executive Decision Series

Successful NYC gallery owner, Stacie Emerson, is ex-fiancée to one Thorne brother and ex-wife to the other. Though the three have made peace, Ellison Thorne’s friend, wildlife photographer, Harris Walker, still doesn’t like her. When Stacie convinces Harris to exhibit his work for the opening of her new gallery she never intended to include him in her other more hazardous plans. But when those plans draw the attention of dangerous business tycoon, Terrance Jamison, Harris comes to her aid. In the shadow of a threat only Stacie understands, can she dare let Harris into her life and make room for love?

***Grab it from Amazon now! FREE for Kindle Unlimited Members!***

Excerpt from The Exhibition:

Outside someone shouted, ‘Hastings, check the crappers.’

Before Harris knew what hit him, Stacie pulled him into the cubicle at the other end of the row and locked the door behind him talking in a fast whisper. ‘Sorry about this. Not very professional, I know, but I promised to do my best to keep us out of jail, and I’m thinking groping in the ladies’ room’s not what this raid’s all about.’ The words were barely out of her mouth before she launched herself at him lips first. Damn it; he wanted to be mad at her. They were about to go to jail, for fuck sake! But instead of giving her a piece of his mind, he kissed her right back, hard, and felt her yield and open, and his tongue was in heaven sparing with hers, tasting, testing, thrusting.

He found himself hoping that the inevitable arrest would wait until after he got his fill of Stacie Emerson, and that could take a while. She felt way better than she had even in his fantasies, and when his badly-behaving hands moved down to cup her magnificent bottom and pull her closer, she returned the favour and gave his ass a good grope. As though that gave him permission to explore, he slid anxious fingers inside her trousers wriggling down past a miniscule thong to cup an impossibly soft, impossibly firm buttock that gave a muscular clench in his hand, forcing her hips forward until she couldn’t possibly miss the press of his appreciative hard-on straining his jeans to get closer to her.

In the hall the noise got louder and the door burst open.

She had just managed a good firm stroke to the front of his trousers that had his full attention and then some, when a heavy-handed knock on the door caused her to yelp, and he nearly fell back onto the commode.

'Grace has this amazing knack of creating sexual tension not just through a few pages, but the whole damn book... ending in incredible sex.' - Midnight Boudoir

Congratulations on the release, Grace!