Why Writers and Cats Get Along So Well

I think the reason writers and cats get along so well is because we’re so similar. We have a lot of the same foibles, personality traits and behaviors.

We’re interested in everything. From the light and shadows reflected across the ceiling to the physics behind time travel and the type of socks eighteenth century men wore. Everything that comes in front of us we find interesting, until we’ve decided it can be of no use to us and then we neglect it like last week’s trash.

We live on crazy schedules. We take a nap in the middle of the day, and stay up till three am writing that scene. We live in our time, on our own schedules, and don’t see the need to change for the real world (except for us poor writers who need to go to a day job).

We’re always watching, observing, internalizing. You might think you’re just having a nice time outside, enjoying a day with your friends, but we’re on the other side of the window, watching and one day one of your conversations may end up in our books. 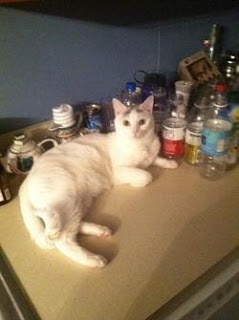 We go crazy over the weirdest things. You may think that’s just a bottle cap, an old shoe lace or a fluffy human interest story on the news, but we think it’s our new favorite toy or great new plot point.

We may seem aloof, but we’re actually quietly plotting. The story for our next book, or a scheme to take down the neighbor’s dog, you’ll only know after it’s all done.

We love rediscovering old toys. Whether it’s the catnip filled mouse that rolled under the couch three weeks ago and we forgot about, or the great idea we wrote in the corner of notebook years ago, we love rediscovering treats we’ve abandoned and seeing the new potential in them.

We can go long periods of time without going outside or seeing other humans. Who needs the outdoors, with all those dogs and their droppings, there’s no wifi access out there. And who needs other humans when we’ve got the cast of characters in our heads.

We can remain focused on the same thing for long periods of time. Yes to you it might seem like only a flash of light or a mostly empty computer screen, but we see all the potential it has to offer, and we’re going to sit there for hours trying to find it. 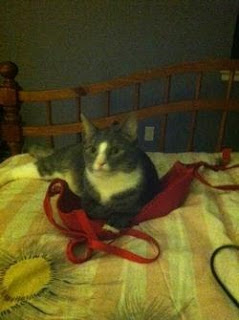 We’re independent thinkers. No way we’re going to kowtow to what others have said can be done. Can’t jump from the counter to the top of the cabinets, we’ll make it happen. Can’t write a romance that’s six hundred pages, or write about vampires that sparkle, we’ll find a way. No one’s going to tell us what to do.

If you bother us at just the wrong time, when we’ve decided to give ourselves a nice tongue bath or when we’ve just found inspiration for the scene that’s been bothering us for weeks, watch out. You’re likely to get scratched bloody and hear an awful lot of screeching.

As you can see, writers and cats are like two peas in a pod, or two tunas in a can. We have the same need for time and space, the same independence, and the same ability to be cuddly and sweet one minute and fierce the next. So any cats out there reading this, and I’m sure there are a few, if you have the ability, adopt a writer. We’ll be the best friend you never knew you wanted (and we’re easily trained, just swat us with your nails a few times, we’ll get it). 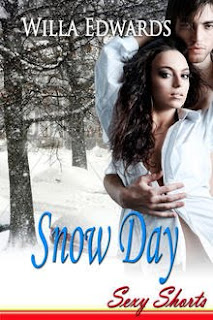 Michaela is thrilled to get home after the tense drive from work on the snow covered highway. And she may be just a little bitter that her boyfriend and teacher, Ben, spent all day in bed, on a snow day from school.

But she's relieved to be let out of work at least a few hours early. That is until she hears noises from her bedroom, that in no way resemble monster trucks or football announcements, and sound way too close another woman's moan.

Michaela can't help but investigate. She never could have guessed what she finds in her bedroom would be just as stimulating to her as it is for Ben. With a little bit of sexy help, Michaela plans to show Ben exactly who he belongs too, and make him wish every day could be a snow day. 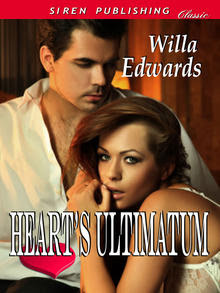 Krista Matthews has been in love with James for two years, but he's never mentioned commitment. After she plans him the ultimate naughty Valentine’s Day surprise, and he doesn't say those three magical words, she knows it’s time to move on. She may be plushy and curvy, but she still deserves someone who loves her for all she is.

Wounded by the past, James Peterson became principal at a new school to escape his mistakes. What he never anticipated was meeting someone as amazing as Krista. She fits him in every way—except her need for a ring. When she dishes out a Valentine's Day ultimatum, give her more or end their relationship, all those old fears come racing back. Does James have the courage to face his past for the woman he loves? Or will he lose her on principal?

The moist tip of his cock rubbed along the sensitive engorged lips of her pussy, stealing all her worries with its tantalizing brush. He teased and tortured her with his slow, methodical movements.

“I could never want anyone the way I want you.” His voice was low, primal, demanding, and her body surged with life from his rough words. If only he could say words of love instead of lust they could do this until they both were too old and gray to care who saw them.

Krista bit her lip so hard she tasted the metallic tang of blood on her tongue, but she didn’t care. She’d bite through her arm if it prevented her from screaming out, from begging James to slam into her hard and fast. She’d do anything to prevent herself from telling him again those words she desperately wanted to hear from his lips.

But she didn’t have to beg. It was only moments before James positioned himself against her slick cunt and slammed deep inside her. He plunged into her, so fast and hard it hurt a little, but it felt so damn good Krista feared she might pass out. He was so thick and hot and hard inside her, it overwhelmed all her other senses.

Krista leaned her forehead against the cool Formica countertop, needing to ground herself in the moment. Feeling too much like a hot air balloon filled with all the love she felt for James, the pleasure he gave her clouded her mind until she forgot the rest of the world. Her entire being focused on his cock buried deep inside her. His arms wrapped around her, right where they were supposed to be. Her insecurities floated away like smoke from a candle flame.

“How can you give this up, Kris?” he groaned into her ear as he pulled out of her and slammed back in.

She wanted to argue with him. She wanted to scream at him she wasn’t the one giving up anything. He’s the one who’d thrown in the lingerie, who’d sacrificed everything they had. But his demanding, dizzying rhythm stole her breath and her wits. She gripped the edge of the counter as his speed multiplied, his body slamming into her so hard, as if he wanted to imprint the memory.

Hi, Willa! Welcome to Beyond Romance, and thanks for sharing both the pics of your fur people and the excerpts from you books!

If anyone wants to see a couple of photos of my current cats, go to:

Hi Willa. Love your post about cats and writers. I have two cats, and yes, I post pictures about them online. I was hoping to get a shot of one of them reading your post, but I could not reach my camera without dislodging her, and woebetide anyone who tries that! :-)

It has been a while since I read any male/female romances, but this one sparks my interest. I love a strong heroine who goes after what she wants and won't settle for anything less.

Thanks Lisabet for having me. I had a really fun time with this one. Any you're furbabies are pretty darn cute too. I like the one hiding in your desk.

L.M. That's so funny. I alwyas try and catch mine doing writer things to, but there fast too. I did one of Immy though (the grey cat playing with my bra) falling asleep on one of my notebooks. And Cordelia (the white princess cat, which se is and she knows it) loves typing on the keyboard but I don't usually take a picture of it, I usually shoo her away so I can write. Thanks for your kind words about my story. I really love this book, I hope the readers do too.

I'm not a cat person but respect those who are. My dog, however, since she's aged, doesn't like to be interrupted any more than the average cat. Like cats, I also don't like being interrupted at work, and I also like a tongue bath! LOL

I'm a total cat person, even though I don't have cats anymore. Great post!! I wish you a ton of success in all your writing :)

BTW, your cats are SO cute!!

I'm a cat person, but try and take a photo of them, they get too close. Want to pet me?

Great excerpt. I think you have a winner there.

First, your cats are beautiful! Second, loved the post! I always wondered what it was about writers and cats. They seem to have such a soothing quality about them don't they?

Watching my cat enjoy the sunshine makes me think of pleasure, which of course, makes me want to write about it! Nice post.

Hi, Willa. Nice post. Love your cuties... have a few of my own. The connection between cats and writers always fascinated me. Good luck with the books.

I am a cat lover as well. I have six of them Talk about entertaining. :) And often, when I'm thinking of how to write a scene, I'll stare up at the ceiling as if there were some tiny bug or smidgen of dust calling my attention. Oh and don't forget the pounce factor. Like my cats, I pounce my hubby when he comes home. ;)