I’ll come straight out with it. I’ve been writing about sex since I first found out what sex was. Before that, I wrote about kissing. For some reason, my mind has lived in the gutter since I can remember, and I never seem to be able to pull it out of there for long! Needless to say, these days I need to think creatively to avoid just repeating the same sex scene over and over again.

It almost feels like too early in the day to be talking about my upcoming release, Battle of Thrills. It’s due out on September 26th, and will be followed by Dominance and Deception on October 10th. I don’t even have pre-order links yet – but I figured I’d throw out a few sexy titbits now. Smutty goodness brightens up everyone’s day, right?

So, what can I say? Battle of Thrills revolves around a sexual game between friends and co-workers who have yet to become lovers – a game with only one rule. Tease. Tempt. Tremble… but don’t touch.

No touching, but everything else is fair game. Descriptive conversations, longing looks, even getting naked – it’s all allowed, and over one desire-filled week, Jared and Elle try to push each other past the limits of their self-control…

So what exactly makes us drawn to sex games? We have literal games – Spin the Bottle, strip poker… how about naked Twister? Then we have dominance and submission, which can be right up the other end of the scale, as a 24/7 lifestyle choice.

Spin the Bottle is a game of chance. D/s is a game of control. What, then, is the Battle of Thrills in the title of my own little creation?

Obviously, it’s a battle of wills – hence the play on words in the title. Willpower and anticipation are the two main ingredients in the game, and let’s throw in a little imagination, too. The trick to the Battle of Thrills is to make the other person give in to their desire before you do. 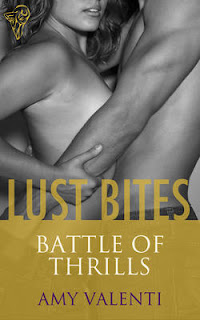 Here’s an excerpt from the book:

Elle moved over to the mats set aside for post-workout stretches, and Jared wandered over after a few minutes, gazing down at her without bothering to hide his appraisal. “Enjoy your workout?”

She made a show of checking him out from head to toe before replying. “Yup. Not as much as I would have if you’d lost your shirt at some point, though.”

She finished her last floor stretch and got to her feet. When her eyes met Jared’s again, she was shocked at the desire she saw there. It was as if he couldn’t hide how much he wanted her, and electricity quivered down her spine as his hands balled into fists, his body tensing with the effort of keeping himself still.

Elle took a step closer, so he could feel her breath on his neck as she whispered, “All that post-workout adrenaline and nowhere to channel it, Jared?”

He closed his eyes for a second, as if gathering enough willpower to resist her, before stepping away. “When this is over, Elle…” he growled, and headed in the direction of the locker rooms.

Swallowing down a plea for him to forget the game, she followed him down the deserted corridor connecting the gym to the showers, answering with all the nonchalance she could muster. “You’re gonna what? Fuck me good and hard?”

He didn’t slow down until he reached the doorway, but then he turned to face her, pulling off his shirt. Pausing for a couple of seconds to allow her to get an eyeful of his firm chest and abs, he told her, “Something like that.”

Before she could compose herself enough to respond, he was gone.

So, why not just dispense with the games and just get it on, already?

Everyone knows good things come to those who wait… and while you wait, there are so many different possible outcomes a creative mind can dream up. Not to mention encounters to be savoured and remembered in private, provocative outfits to be worn, new visual and aural torments to devise…

And then, finally, after hours or days of deliciously frustrated anticipation, the release is all the sweeter when it comes. If you’re the winner, you have the added bonus of the victory, but if not, who cares? You’ll have just had the sex of your life!

I don’t know if anyone has actually played this game, or if it has a name. It’s just something I dreamed up one day, and I naturally had to write about it. Let me know if you’ve heard of it before – I’ll be interested to hear about it. :)

You can find Jared’s character profile – and a further excerpt from Battle of Thrills – on my blog: http://amyvalenti.wordpress.com/2011/07/27/introducing-jared-lancaster/ I’m also on Twitter: http://www.twitter.com/AmyValenti and Facebook: http://www.facebook.com/AmyValentiErotica

Look out for Battle of Thrills at the end of next month!

Big thanks to Lisabet for giving me a guest spot. :)

She has a degree in creative writing, currently works in internet marketing and moonlights as a proofreader/copy editor. In her free time, she reads, writes and plays videogames. On the rare occasions she doesn’t have a laptop on her knee, she loves to curl up with friends and pets – and chocolate – for TV show and movie marathons.

Welcome to Beyond Romance and thanks sharing for your bits of "smutty goodness". You certainly brightened MY day!

Thanks for having me here, Lisabet! :D

Pffft, 'serious' books. They're not half as fun to write as sexy stuff! ;)

That's always a fun part of starting a relationship, the teasing and taunting before first sex. With a good partner, it can continue. I love to work my honey up into a lather before our Saturdy night date...we have some good lovin' when we get home!