It's Sunday again and that means it's time for more snoggery. Thanks to Ms. Victoria Blisse, Sunday kiss excerpts have become a fun tradition.

Since I gave you a M/M kiss from Necessary Madness two weeks ago, I thought I'd give equal time to the female sex with this snippet from "Rush Hour", published in the highly acclaimed collection Where the Girls Are: Urban Lesbian Erotica, edited by D.L. King. 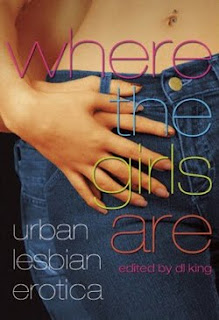 My doorman raised a skeptical eyebrow when he saw Mina’s wet, ratty figure. “Good evening, Ms. Gladstone.” His voice held a nicely calculated hint of scorn. No one is more sensitive to the social nuances than a Manhattan doorman.

I ignored him, shepherding Mina into the elevator.

The mirrors in the lift revealed two very bedraggled women. Mina’s mascara had run. Her eyes were huge and dark like some anime character. Her soaked sweater hung limply from her shoulders. Her black stockings were laddered with multiple runs, though for all I knew that might be a deliberate part of her costume.

As for me, my two-hundred-dollar haircut was plastered to my forehead in rust-colored tangles. Oily splashes reached to the knees of my beige linen trousers and there was a smear of mud on my cheek. My leather briefcase and purse looked like they had leprosy.

Laughter bubbled up in my chest. I looked so silly. I knew that it was quarter to seven but all at once it didn’t seem to matter.

And Mina? To me, at that moment, she was simply beautiful.

I grabbed her shoulders and pulled her body against mine. I was at least half a head taller than the Goth girl. She tilted her chin up, offering her wine-colored lips. I fastened on them as though I were dying of thirst.

Her mouth was firm, elastic, muscular. I was the aggressor at first, but that didn’t last. Before long she was working her lips against mine, sucking my tongue into her mouth, probing with her own. Her fierce energy overwhelmed me; I let go and allowed her to take what she wanted. As her hands slipped under my jacket to massage my breasts, I remembered the security cameras. A fresh deluge of kisses washed the thought from my mind.

We toppled out of the elevator, groping each other, and stumbled down the hall to my door. I couldn’t manage to unlock it. Mina kept twisting my nipples; I couldn’t hold the key steady.

Finally, we were inside. I pushed her against the wall, taking control. My knee rose between her legs until she was forced to stand on tiptoe. I bent to her throat and licked my way down into her cleavage, finally tasting the pale flesh that had tantalized me in the cab.

Posted by Lisabet Sarai at 9:55 AM

Email ThisBlogThis!Share to TwitterShare to FacebookShare to Pinterest
Labels: kissing, Rush Hour, Where the Girls Are

Thanks for another hot contribution to the Sunday Snog!

Thanks for checking me out, Victoria!!