A Kiss from Necessary Madness 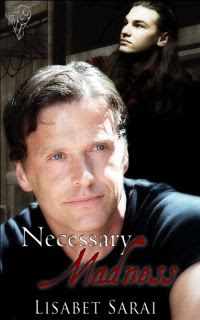 Another Sunday, another snog, keeping up with Ms. Blisse... This one's from my M/M paranormal novel Necessary Madness

Kyle was close, too. For a moment, he allowed himself to really feel Rob’s talented fingers, pulling, massaging, every touch sending waves of delicious sensation surging through him. The man was so strong, so sure of himself, despite his earlier reticence. It has been so terribly long since anyone cared about Kyle’s pleasure.

Dizziness fluttered through him. The world lurched a little. No, not now, Kyle pleaded hopelessly. He felt the pressure build. He hung on the edge. Reality tilted, shimmered. No, no, no…

“Oh, baby,” Rob panted, fastening his mouth on Kyle’s. Kyle wallowed in the wonderful sensations. Heat and wetness, above and below. Rob’s tongue, Rob’s taste, Rob’s hard body pressed against him.

Then a black void swallowed him. No light. No feeling. No sound except for Kyle’s own heartbeat, loud in his ears.

The words appeared as letters of fire, hanging in the emptiness. ‘Dawson Street Holden’. As Kyle watched, they loomed closer, then disintegrated in a shower of sparks, leaving him in darkness.

“Kyle? Kyle!” Rob was shaking him so hard that Kyle’s teeth rattled. “Come back!” The vision fled as swiftly as it had arrived. “Are you all right?”

Rob’s brows were knitted in worry. Kyle tried to produce a reassuring smile. “Yeah, I think so. How long was I gone?”

“Ten seconds, maybe. I could tell exactly when it happened. One instant I was kissing you, and you were kissing me back. The next instant—it was as though you were an empty shell. No reaction. Nobody there. It was the weirdest thing.”

“Well, I remember the kiss.” Kyle lay back on the pillows, overwhelmed by an unaccustomed sense of well-being. “It was really something.” He extended his arms. “Why don’t you lie down and we can try it again.”

Rob bent over and brushed his lips against Kyle’s as if he were afraid that the younger man might break. “Not like that,” Kyle laughed. He pulled the cop to his chest, revelling in the sensation of the man’s warm skin against his own. Taking Rob’s face in his hands, he kissed him, hard and deep. Their tongues tangled, Rob’s no less forceful than Kyle’s now that the younger man had taken the initiative. Rob rubbed his sticky groin against Kyle’s thigh. Kyle felt his cock stir and swell once again.

Posted by Lisabet Sarai at 4:56 AM

Wonderful kiss and the emotions all captured so beautifully.

I could say the same thing for yours. Different emotions!