In Green Mountain Boys, the night before they head off separate ways - one to the Marines, the other to college - childhood friends realize that they're really childhood sweethearts. Neither one has dared to admit it, but in their last hours together, one finally risks a kiss. It's a bit melancholy as they, and you, realize that they'd missed out on a lot by keeping their secrets, but they have hope for the future, and besides, they had everything together except sex until that point. Sure, it's humpy horny teenage boys in the woods, but that's about as romantic as I get.

Or is it? Left Unsaid won the Seattle Erotic Arts Festival's short story contest several years ago, but this is the first time it's been published. It's about love, but not exactly happy love. I was driving home from work one day when police helicopters appeared overhead. Traffic of course came to a halt as people watched them circle. I flipped around news until I found out that there had been a bank robbery and a cop had been shot. The suspects then fled onto the freeway. (During rush hour? Idiots.) The news repeated constantly but never gave us any more information. As I got more frustrated by the slow crawl behind the traffic break, I had a flash of inspiration. If I were a cop's lover, and I knew the shooting happened where he patrolled, and all I could get was lousy news updates that told me nothing, how frantic would I be? And then after getting so worked up, what if I wasn't able to talk to him about the hell I'd been through? I poured it out over the page, and I'm very proud of it. I can't read that story in public. I get all choked up still. It isn't a happily ever after story, but it's about deeply loving someone, so I think it's romantic.

For my Chaos Magic series (Chaos Magic, Love Runes, and Personal Demons, available from Torquere Press), I jumped into the deep end of abusive relationships. Readers actually apologized for not liking Hector sometimes. What about his worst qualities was supposed to be likeable? They should have been angry with him. That's what I hoped for. For the first two books, I concentrated on getting Sam to a place where he was confident enough in himself that he could finally stand up and say, "No more." Strangely enough, it's Hector who gets him there. But in the last book, it's Hector who finally has to change. It's not an easy read, but I think that it's more honest about the way relationships work than a black and white "he's the villain, so he's always one hundred percent bad" depiction.

Everyone has flaws. Hector and Sam's problem is that they keep making excuses for each other because they're deeply in love. Eventually, that isn't enough, and facing it tears them apart (at first). I'm not saying that people should stay in abusive relationships. Part of me wanted to have Sam move on and never look back. But I also believe that someone who is strongly motivated to change their ways can. It's better to try to fix your issues than move on to another relationship and make the same mistakes, right? And if therapy never works, why hold out that false hope to someone who really wants to become a better person? Of course I was torn over it. Personally, if someone treated me the way Hector treated Sam, I would have ended it. But I'm not Sam. And I realize that when it comes to love, there aren't always easy answers.

For my Bonded series (Bonded I & II, and The Quality of Mercy and Twice Blest, also from Torquere) I went a much lighter route. Brandr is a thousand-year old vampire who has lived alone too long. When newly turned vampire go-go boy Kyle crashes into his life, everything goes to hell. Brandr wants to be a solitary grump but he can't resist Kyle's infectious energy. Every time Brandr turns around, another vampire boy has moved into his house and he loses a little more control over his careful solitary life. The entire series is silly and sweet and does dreadful things to vampire dignity. At its core, it's about the irresistible lure of love. 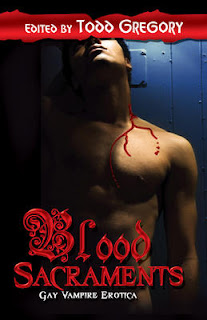 As one of your big fans, I'm delighted to have you as my guest at Beyond Romance. One of the things I love about your work is the way you can write about love while still flaunting romance conventions. I wish I were as brave.

Where can I get Chaos Magic, Love Runes, and Personal Demons? This series sound wow! Would love to read it.

Well now I know your a romantic. A well hidden one at that..*S*
I love emotional reads that draw the reader to the story and now I have all yours to look forward to. Wonderful ! I've added all of your titles to my gotta have list, and thank you for sharing your writing experience with us. I love finding authors I haven't read before it's like little presents....*S*