I very rarely do blog posts about normal things, like upcoming releases. Usually I do them about weird things, like future worlds where everyone has three penises (http://geekandkink.com/2011/07/a-sexy-bunch-of-grapes/) or sexy menz what I happen to like (http://themightycharlottestein.blogspot.com/2011/08/mancandy-monday-brandon-routh.html ).

It’s not even really a subject. It’s more of a theme that Total-E-Bound are having for an upcoming collection of stories I’m a part of, and for it I decided to go a slightly different way to the other peeps who have also written some orsum stories.

Which is why I wrote Guarded. It’s set in a semi-fantasy world of mystical creatures and forbidden love and prophetic scrolls, and I had an absolute blast writing it. There’s nothing quite as fun as creating a fantasy world – unless maybe it’s a fantasy world that also has threesomes in it.

Which my story totally does. Check it out: 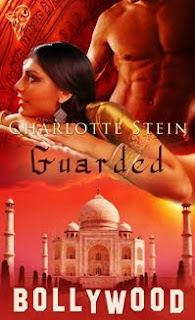 When Amina is captured by the Maharaja of Hadad and forced to read his prophetic scrolls, all she can think of is escape. But then Ashan and Orin are assigned to guard her, and they're giving her some thoughts she's sure she shouldn't be having.

They're both big, they're both handsome, and they're both sworn to protect, guard and be by her side at all times - something which proves increasingly difficult as the steamy nights get longer and their desire for each other reaches boiling point. When she next runs, they're right on her tail, and this time they have more for her than bound hands and stern words. They've got their own needs, and they mean to satisfy them...

And yeah, okay, maybe that doesn’t fully give you a taste of the kind of ménage action I’m talking about. Maybe you’re now thinking: huh. There’s barely a flavour of ménage, there. Where’s our guarantee, Charlotte, that these people all totally get it on together?

Orin did as she expected him to—only unpinning one side of her sari so it fell from her shoulder. And when it went a little low—the material sliding down to near unseemly levels—he made her hold it tight.

Ashan’s expression said it all—Gods forbid he should see a breast.

She hadn’t the faintest clue what Orin would do should such a thing happen. If she stripped down now—just pulled off all her clothes and stood before him naked—would he show offence? It seemed as though he might, but then again…

His expression in the stables. There had been fire there, she knew it. And when he slicked his two big hands with the queer concoction Ashan claimed was ointment, he looked harried somehow. Not himself.

Though truthfully, the same could have been said of Ashan. He had no barriers to hide behind or break down, no restraint she could ever see. But his expression had an odd tightness to it, and when Orin held off touching her for a shade too long, she could almost hear the words Ashan wanted to say—Get on with it!

But he refrained and looked on her instead. Big, blue eyes even bigger than usual, the corner of one thumb edging its way towards his mouth as if of its own accord. As though he had imagined something like this happening a thousand times and had even moved events towards it when the chances had come, but now that it was here…

Now that they were going to…

Gods, what were they going to do? She didn’t know, she didn’t know, but when Orin finally and haltingly placed his big hands on her bare shoulder… It was like nothing else in all the known worlds. His skin was cool and hot at the same time and he was shaking, she felt certain of it.

He definitely wasn’t moving, though. When she dared turn to him, he was just staring at his two hands on her shoulder as though they’d sprouted legs and walked their way to her flesh. She tried to recall another moment when he’d touched her so intimately and could only come up with the time she’d passed out with exhaustion over the scrolls, still reading some tiny scrap of an insignificant future.

He had picked her up and carried her and she’d come around just as he had laid her on her bed. His look had been the same one he wore now—of someone who had been caught doing something they ought not to.

“Go on,” Ashan whispered, but even he sounded guilty. Guilty and hushed as the pair of them went about spoiling the Maharaja’s prize.

Though really, was it so much of a spoil? No one cared one whit about her maidenhead anymore, and she’d been told by many a wizard woman that she’d never bear a child. She would never marry, never need to go to some man pure. She could read the scrolls whether a virgin or no.

Who better to have it than them?

Or perhaps the better question was—who better to talk into taking her virginity than them? Because she could see by this point that Orin was going to take a lot of talking into it. He still hadn’t moved his hands. They remained on her shoulder, slick and tantalising, a warm, wet promise of what might come.

But they didn’t move, and she knew they had to. She knew what had to happen in order for them to share in pleasures and the like. She’d read the books and seen the cook with the water wench, and when she’d been just a young girl, her grandmother had told her and then he puts his great thing in you and you die.

It all sounded very straightforward and reasonable. Until you did it, and then it was all just embarrassing and strange. Her nipples stiffened beneath the thin material of her sari and she knew they could both see—even though Orin had hardly done anything at all.

Her entire body felt flushed too. All over her neck and her cheeks and then down, down, down to other places that weren’t usually quite so warm. Which felt like a blessing when she really thought about it, because if she’d experienced this warmth before she wasn’t sure what she would have done about it, trapped in a room with two men, one on either side of her bed.

She couldn’t possibly have relieved herself. She couldn’t relieve herself now, even though it seemed almost certain they were going to do sex things anyway. Who here would care if she slipped her hand between her legs the way the ache there was begging her to?

Except for Orin, of course. He would probably care. And when she considered it, Ashan likely would too. He’d already sprouted a great ridge in his always too tight breeches, and it looked as though he wanted to chew that knuckle in his mouth clean off.

Finally, he burst out, “Orin, get on with it. Just soothe her ache, would you?”

Gods, how she wished he meant the other ache. The one that had started to thrum, thrum, thrum like a second heartbeat, right between her legs. But then she saw a wicked look flash across his face and she couldn’t deny it. It thrilled through her to imagine that was what he had meant.

And the thrill burrowed deeper when Ashan’s eyes became soft and heavy-lidded and he murmured encouraging words to his rigid and harshly breathing friend.

“That’s it. Just slide your hand down over her arm. Slowly. Slowly.”

Orin did so—but it wasn’t the smooth, calm stroke she’d expected. Instead, his hand stuttered over her skin, slick and thick with oil but far from sure about it. His eyes were downcast though she could make out the things on which he gazed.

Her arm, as the shimmering liquid coated it and turned her skin to honey. The material at her breast, still clinging there and covering quite ably—but only just. If he were to tug only a little, everything would come down, she knew it.

And longed for it.

That’s ménage-y, right? Hooray! So anyway, if you liked that excerpt, and maybe want to see a little more than that tease I’ve just given you, you can buy Guarded from September 5th, right here:

Along with a bunch of other fabulous Bollywood themed stories! Double Hooray!

And finally, I just wanted to say a big thank you to Lisabet for having me. And for putting up with my haphazard approach to getting things done and actually replying to emails, because I am a total divot.

You can find her at www.themightycharlottestein.blogspot.com, usually in the middle of rambling about nonsense, squee-ing over her totally unexpected life as a writer, and generally lusting after seriously sexy men.

Greetings, Charlotte! I'm squee-ing over having you as my guest at BR! Your Bollywood extravaganza sounds like huge fun. I wish you great success with it - and all your other projects.