[Note from Lisabet: Starla's giving away a copy of one of her books to one lucky commenter!]

It is important that the reader be given an introduction to the main characters that will, hopefully, pull at their heart strings in some way. The reader needs to see the characters as “real” people, who face ups and downs in their lives just as they do. The characters struggle with conflicts in their lives, in their jobs, and in their relationships. A reader needs to pull for the characters. She should keep turning the pages to see how these people battle forward and work toward achieving their goals. And the romance reader wants to see some kind of happily ever after for the characters, whether it is for long term or at least for now in their lives. But the reader also wants to watch the changes these characters make, experience the intensity building internally and externally.

In Starting Over, my newest release from Decadent Publishing, I wanted to create a story about two men struggling to move on from difficult issues they’ve faced in their lives. Corbin had reached the point where his work didn’t satisfy him. He’d had to drag himself out of bed then force himself to drive thirty minutes into the city. A lot of people face this day-to-day as they work in jobs they don’t really enjoy. But we do what we have to do.

Corbin had to make a hard decision about something that was adding to his depression about facing each day.

He’d finally admitted he was gay to Pamela (ex-wife), his parents, and siblings. According to his therapist, a huge breakthrough…. Taking the next step scared the hell out of him. Yet he couldn’t keep avoiding it. He had to get back into the dating game, although he faced a completely different game than he’d ever participated in before…. He’d honestly tried to shove his secret desires aside and make the marriage work…. She’d tried, too…. They still loved each other, but they couldn’t be man and wife….

He was scared shitless. Imagining was one thing; actually doing it something completely different…. He needed to buck up and go have his first time alone with a man.

I hoped at this point that the reader could see what kind of man he was. Corbin cared about his ex-wife, about what his family thought of him, and he’d held back who he truly was for as long as he could. He doesn’t want anyone hurt, except that he has been the one suffering most and he needs to fix that matter.

The second hero in the story, Matt, has also dealt with many stressful issues over the years. He didn’t have the support of his family as a teenager when he’d admitted he was gay. He’d had to leave home and start over, but he’d found his way and he’d found a mate to share life with for the rest of his days. But his lover died. Now, it hurt soul deep to live like this, alone, with no one to go home to. No one to share the ups and downs of his days with. He needed to once again start over.

By now the reader knows the emotional conflicts both men face; understand how hard it is for them to take this next step in their lives. Starting Over is part of the 1Night Stand series, in which Madame Eve has a high-end dating service that arranges special matches…with the unsaid hope that the matches will be for longer than just the one night. Corbin and Matt both decided to try this service. Neither man was looking for something permanent. They both simply wanted to take that next step in their lives: one to enter a lifestyle completely foreign to him, one to heal and move on toward another relationship someday.

This is where I tried to kick up the intensity, pull the reader further into how the characters feel about and face the initial pivotal point of the story. In their first meeting, Corbin is way out of his comfort zone. “I hope I don’t disappoint you…. I’ve never…well, never been with a man.” Matt has been concerned, as well as excited, about being with a virgin gay man. The admission took guts. Until that moment, Matt hadn’t really intended to actually have sex with the date he’d been matched with, although he’d toyed with the idea. Now, he intended to be Corbin’s first male lover.

Besides pumping up the emotional intensity, I heated up the sexual interest while still playing on the wariness of this new experience. He (Corbin) tried not to stare at Matt’s obvious erection, tried not to worry if he could take all of it. Take all of it? Damn. He’d entered uncharted territory. A place he’d fantasized about, but hadn’t ever really thought he would arrive. And from Matt’s side…The photo he’d seen of Bradley didn’t do him justice. It seemed so wrong to ever hide those broad shoulders, the amazing pecs, and incredible six-pack beneath a suit, even an obviously expensive, tailored one. He longed to smooth his hands over what he saw, feel the muscles beneath his palms, play with the nipples and the spattering of dark hair on his chest. He wanted to….

Then we move to the next pivotal step, the next highly emotional time where something is actually going to happen between the two men. “Truth time. I’m not positive how all of this will work, but I need you to fuck me.” He (Corbin) glanced down at his thick shaft and back at Matt. “As long as I can return the favor.” Keeping in mind that Matt is an experienced gay man, he is dealing with his own issues. Lust fired through him. He wanted Corbin, ached for him. Somehow he had to find the inner strength to take his time, to not scare the hell out of him.

Heating up the intensity of the situation even more, Corbin makes his decision. “Let’s do it.” He would have a cock rammed into his ass for the first time in his life. Matt was ready to comply after he prepared the other man. This was Corbin’s first time. He needed to be tolerant, although it strained the limits of his patience.

Okay, I’ve shown you how the intensity of emotions and physical needs is established with excerpts from Starting Over. I’m hoping your interest was sparked into wanting to read the story and find out more about how these two special men faced their needs and moved forward in their lives. I’m going to leave you hanging here to read their ending, their happily ever after. 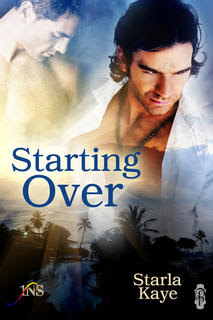 Email ThisBlogThis!Share to TwitterShare to FacebookShare to Pinterest
Labels: Starla Kaye, Starting Over

Thanks for having me here today, Lisabet. I look forward to seeing some comments.

CONTEST: Leave a comment and be part of a drawing for an ebook copy of either Starting Over or Maggie's Secret Wish.

You're very welcome! Sorry I couldn't come by earlier - Wednesdays are tough for me. I'll be sure to announce your giveaway!

Thank you for explaining how you bump up the tension in your story. It gives me ideas on how to do it in one of my WIPs.

Hello! That's the tricky part, introducing the characters and telling their story without rambling on too much. It looks like you have two interesting characters in Starting Over! I like the "steps" that you take to move them along.

Thank you, Janice and Naomi, for stopping by to read the blog and leave a comment. Yes, figuring out how to introduce the characters and their internal/external conflicts without rambling on ad-nauseum can be tricky. Fortunately I have wonderful editors who help me with that problem.

They sound like great characters and the little glimpses were very hot. I like the fact that one is experienced and the other is not. Alot of authors have the tendency to ramble on and state the characters feelings over and over just in different words, it drives me crazy, I like alot of dialogue. Thanks so much for sharing with us.

Thanks, Heather, for your comment. Yes, I too hate to read stories where feelings are restated over and over. Usually I just skim over all that unnecessary extra word count.

The winner for my comment contest here is Janice. Thanks to the rest of you for stopping by and commenting as well.