What I’ll Be Thinking About This Christmas

I’m not much of a Christmas person. I’m not religious, so therefore all Christmas is about for me is lots of hassle, expenditure and some time off work. With the latter being by far the best part. Oh, that and the chocolate, of course.

This year is going to be different. I’ll be safely ensconced in my warm house with my presents, nice soft bed, plenty of food, people I care about and some time to chill out. However, one of my closest friends won’t have the luxury of any of those things. My friend serves in the British Army and will be spending Christmas in Afghanistan. He’s resigned to this fate, but I can’t help thinking about how rubbish it is. I’ll be spending Christmas as I usually do, and yet my friend will be miles and miles away from home, never daring to fully relax, just in case. 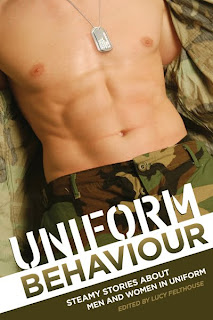 My only consolation is that my friend will have some decent reading material to keep him occupied in the little downtime he gets. By then, he’ll have a copy of my latest erotic anthology on his laptop and it’ll make him smile. The title is Uniform Behaviour – Steamy Stories About Men and Women in Uniform. A percentage of the proceeds goes to UK charity Help for Heroes, a fund set up to help servicemen and women who have been wounded in current conflict. My friend has known all along that I planned to do this with the anthology and has naturally been behind me 100%. I just hope the anthology raises enough money to make a difference to the life of someone who’s put theirs on the line for their country.

So this Christmas I’ll be thinking about my friend and hoping he’s OK. I’ll also be hoping that people are loading up their brand new Kindles with copies of Uniform Behaviour and filling the charity coffers. That way, together we can help people who have served us and give something back.

Uniform Behaviour – Steamy Stories About Men and Women in Uniform

Do you get all weak-kneed at the sight of a grubby fireman or a hunky soldier? Perhaps immaculately-dressed waiting-on staff get you feeling frisky? If so, you’ve come to the right place.

As well as being written and compiled for your titillation, this anthology is also designed to do good. A portion of the proceeds from Uniform Behaviour will be donated to UK charity Help for Heroes, which helps those wounded in current conflict.

Welcome to Beyond Romance, Lucy!

Thank you for joining us here and telling the world about UNIFORM BEHAVIOR. I hope the book sells like hotcakes!

Actually, I hope it sells better than hotcakes...

What a wonderful warm gift you've given your friend.

Hi Lucy,
That is a really lovely thing you are doing for your soldier friend. I commend you for it. Pity the politicians who send these young men to war, don't have the decency to make sure they are well looked after when they return home wounded. Our veterans support here in Australia is reasonably good, but not good enough considering the sacrifice these heroes have made.