The Queen of Tease

My guest today is best-selling author Marie Rochelle, who is sharing information on her new release More Than Friends: Brad, coming out next Monday.

Brad Drace desired the beautiful and sexy Alicia Hart from the moment he saw her on the tennis court and he didn’t make it a secret to her. However, Alicia made it very clear that a romantic relationship couldn’t and wouldn’t happen between them.

Yet, Alicia didn’t seem to understand that he was a Drace brother and the men in his family never took no for an answer.

Alicia Hart wasn’t interested in getting involved with Brad. He had a way of staring at her like he saw her every hope and dream. No matter how much he wanted something more. She had to stay strong and make sure they never became… More than Friends. 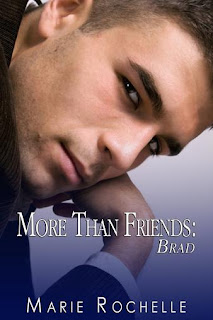 Alicia tried to calm down her racing heart at the warm, rich sound of Brad’s voice. Just the tone of it sent her down a path of steamy nights rolling around in bed for days. Lord, it wasn’t right that one man could make her entire body melt with one spoken word. She had to keep her wits about her.

“Brad, it’s me, Alicia,” she spoke up when she finally regained her voice well enough to speak.

“Sweetheart, I know. I saw your name on my Caller Id, but I thought I was seeing things at first. How are you doing?” his deep, rich, tempting voice asked.

Sweetheart…Alicia wouldn’t admit it to Brad, but she liked when he called her that.

“I’m doing well.” Alicia kicked off her shoes and relaxed on the couch. Taking to Brad always made her feel so comfortable and peaceful, she didn’t know what it was about his tone but it did something to her.

“That’s good, Alicia. Why are you calling me? I thought you told me that you weren’t going to talk to me anymore after our last conversation? What can I do for you?”

She heard the slight hesitancy in his words, but Alicia wasn’t to allow that to stop her.”I need to talk to you. I know it’s late, but do you think that you can come by for a few minutes? It’s really important.”

There was a long pause and Alicia wondered was Brad even going to answer her. Maybe he was remembering the last time they were together and it wasn’t sitting well with him. She might have ruined her chances spending anytime with him and that hurt her more than not being about to do the project Tiffany wanted.

“Yes, I can come over when do you need to see me?” Brad asked.

Alicia clutched the phone to her ear and sent up a silent prayer that Brad hadn’t blown her off. God, he was such an amazing man. He was going to make some woman a wonderful husband.

“Do you think that you can come over tonight? I know it’s very short notice, but it’s really important.” Please let him say yes.

“Okay, I think I can swing by there before I head home,” he replied and then ended the phone call before she could say another word.

Alicia looked at the phone in her hand with semi-shock. Did Bard mean that he was actually going to show up for her tonight because she had asked him? Would it be in the next hour or three hours from now? Well, it didn’t matter how long it took because she was going to wait up for him.

After he showed up and she confessed the reason she called him over to her house what would Brad tell her. He wasn’t the type of guy to tell her to shove the idea up her ass or anything. No, he was too much of a gentleman for that kind of comment. God…Brad agreeing to ask his brothers wasn’t the only hurdle that she had to jump over.

The other Drace brothers had to give the green light for it too, but Lee would be the hardest sell. He hated her with a passion sorely for the way she had treat Brad over the years. However, she couldn’t blame Lee for his low opinion of her. Brad had been open with his feelings over the years and she constantly ran from them.

A sudden knock on the door drew Alicia’s away from her inner thoughts. Getting up off the couch, Alicia hurried over to the door and swung it open. She was glad that she was holding on to the door frame because if she hadn’t been she would have fallen over after looking at Brad.

Damn, was it right for one man to look this perfect without even trying?

The Queen of Tease: If you want to read interracial romance stories that leaves you panting for more and turning the pages faster than you can read them. Marie is for you.

After reading her first “dirty” book as a teenager, Marie knew she had to become a writer. She started writing a few years ago because she wanted to reach for her dream. She writes her characters so her fans will believe in the Happily Ever After. She loves collecting bear figurines and reading a HOT book when she gets the chance.

Find out more about Marie here:

Welcome to Beyond Romance, and good luck with the book!

Thank you so much for having me and my fans will be excited to know that More than Friends:Brad got released early. So, they can head over to www.phaze.com and get their copy today.

I just awarded you an award on my main blog. http://ladyjanice.blogspot.com/

Thank you for the compliment.