Where Does Inspiration Come From?

One can talk about motivation and inspiration as though they were one and the same. That, however, is far from the truth. Motivation has to do with getting up, getting something done. Inspiration, on the other hand, comes from deeper within, from the heart of the writer.

Merriam Webster’s dictionary defines motivation as something that causes a person to act, like a need or desire. For example, Kerry was motivated to diet when she stepped on the scales after the holiday season.

Inspiration, on the other hand, is defined as “a divine influence or action on a person believed to qualify him or her to receive and communicated sacred revelation” or “the action or power of moving the intellect or emotions.”

As one can see, there is a great difference in the two words. How does this apply to our writing? Do we see the inspiration as a divine influence? I don’t know about you, but I certainly hadn’t thought of it that way. On the other hand, there have been times that I have been writing and been “in the zone,” where the words come fast and furious and I wonder from whence they come.

One could say that inspiration causes motivation, which in turn causes action. Inspiration seems to come from the heart, while motivation is acting on the inspiration found within. 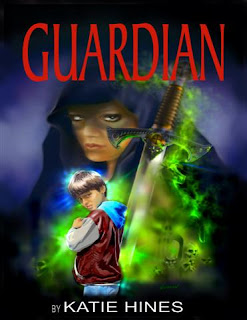 Katie Hines has been writing snippets here and there as long as she can remember. When in 8th grade, she wrote a short story called, "Underworld." Then, in high school, she wrote several poems that were published in an anthology.

Marriage and raising two children contributed to putting away writing for a few years, but she came back to it while in her 40s. Since that time, she has been a contributing feature writer and columnist for a local newspaper, has written several features articles for another area newspaper, and wrote religious and humor articles for an online Catholic ezine.

Since the release of "Guardian," Katie is working on another fantasy novel as well as a couple of chapter books, and is extending "My Name is Bib" into a full young adult novel.

Imagine you have made a secret promise that can lead you to an incredible treasure and an ancient power. But in order to fulfill that promise, you must defeat an age-old sect determined to claim the treasure and power themselves.

Welcome to Beyond Romance. You've raised an interesting question. Sometimes I'm inspired. Sometimes I'm not. However, I have come to believe that if one is serious about a professional writing career, you cannot afford to wait for inspiration. When it does come, it's an incredible high. But I have deadlines whether I'm inspired or not.

I do wonder if there are things one can do to nurture inspiration, and make it a more regular occurrence. I'm looking forward to hearing what other commenters have to say on this topic.

Interesting. I'd never tried to seperate the two, but you have a point. Am I always motivated to write? Yes. I love writing. It is my life. But am I always inspired?

You can't force it, and when you try, sometimes you might find something locked down inside, something that refuses to be manipulated.

Hi Katie, To have a career as an author you have to sit down and write whether motivated or inspired. You hope inspiration will come, and sometimes it does seemingly out of nowhere. It a mystifying process.

I agree, ladies. Inspiration doesn't always come, but it sure is nice when it does come! The current ya novel I'm working on has sections of inspired writing, and sections of every-word-is-like-pulling-teeth section. I like the "inspired" sections, but have learned to trust my gut for when the writing doesn't seem to be inspired, and that sometimes the uninspired is the best writing.

I like the distinction you made between motivation and inspiration.

I am not always motivated, but I am often inspired. However, once my motivation kicks into gear, my inspiration really does soar.

The more I seek inspiration, the less likely I am to find it. I find that when my body is occupied with physical tasks, it opens my mind. That's why I do yoga and take ballet class regularly--even the music helps. THe other day while shoveling snow, I had several insights into my work in progress. The human brain is a fascinating thing that we have only yet begun to understand.