When my husband and I first moved to Tennessee, we lived in my son’s in-law’s house in Sparta, which is a couple of hours away from my grandson, Spencer. I was thrilled to be closer than California, and available to help with him when I could. He’s autistic in case you haven’t read any of my million posts that mention him. Still, moving here to be closer to him didn’t negate our need for income. Despite the great rental deal we were given, the outsourcing of jobs in the area had really damaged the economy there, and my husband had no luck finding employment.

He decided to try being a handyman, and he did secure a couple of jobs, but that was what most out-of-work men were doing to earn cash. Together we decided that he’d try the trucking industry, but until his earning began, I decided to look for a temporary position.

I visited the local employment office and was immediately sent to the White County Sheriff’s office for an interview. Imagine my surprise when I got there and discovered I was asking to be considered for a Correctional Officer Position in the county jail. I went through with the interview, even tried not to squirm when the Jail Administrator showed me a picture of him beat to a pulp by one of the inmates, and left certain I’d never be hired at my age with no experience at all in the field.

Shock of shocks…when I got home, I found a message on the recorder…I got the job! I showed up the next day, got my uniform pants, was informed I needed a gun and all the accessories. I made a quick trip to a uniform store in a neighboring town and bought a utility belt, holster, cuffs, pepper spray holder, stays to keep everything in place, and two black shirts that said, “Sheriff” on the back. I kept asking myself, “what are you thinking? 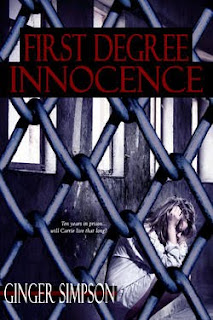 Anyhow to make a long story short, I worked there for a year, and I loved it. It was probably one of the most exciting positions I’ve ever held and, from that experience, I gained fodder for my recently-released novel, First Degree Innocence. The title stemmed from all the claims of innocence I heard daily. It seems no one in jail is guilty. I honestly believe that 90% of the women incarcerated are there because of their involvement with a man. Anyhow that seemed to be the case. The county facility also housed state inmates because of the over-crowding in the prison system, so we had our hands full. I was shocked that most want to go to prison because life there is simpler than in the county jail.

Of all the experiences I had, I can’t adequately explain how awesome it was to shoot a gun for the very first time and score the highest of all those qualifying at the time. That included the deputies. I sure never expected to become a gun-totin’ granny, but the experience was worth every minute of it. If I was twenty years younger, I’d go back in a hot minute.

So, I hope you’ll read the exciting story of Carrie Lang, my heroine who is wrongfully convicted for a crime she didn’t commit. Here’s the video to give you a little taste:

You can buy the book from Amazon or other outlets.

Want more? Drop by my blog for more information on me and my books - and a few laughs, too: mizging.blogspot.com.

Welcome back to Beyond Romance! I love having you as a guest. You're always original - and frequently hilarious, although I'll admit that (in keeping with the subject of FIRST DEGREE INNOCENCE) you seem pretty serious today.

Best of luck with the book!

Enjoyed your story, Ginger. Love the idea that you are a gun-tottin' granny. My grandson bought a tee shirt once that read: "Don't mess with me or I'll call my grandma." And maybe you are not too old to work in the jail again.

Thanks for the support and comments, Ladies. I probably could write another book about the turnover of unscrupulous officers employed there. :)

I am so going to read your book because I know that most women get themselves into a situation because of a man. It's sad really. What really hooked me was the mention of another book about the turnover of unscrupulous officers. Get that pen out and start writing because once I'm done with this one, I'm going to want to read the next... and the next..

Good for you, Ginger, for taking the job, and for using the life experience to give authenticity to your work!

Wow, Ginger, talk about an exciting career. I wondered how you knew so much about prison life (but was afraid to ask, LOL). Seriously, I read First Degree of Innocenence and loved it.

Ginger fascinating interview, I think your speculation that the inmates are mostly in jail because of a man, is right on. If only all woman could find their self respect early in life, and brandish it with a iron fist throughout their lives... Oh well just dreaming here. Anyway I really can't wait to read First Degree!

OMG Ginger, a gun toting granny. Should I be afraid?

First Degree of Innocence, sounds like another fabulous story.