But what other fairy tales could easily be kinky? Well, I saved that question for my guest post on Lisabet’s blog (as a special thank you) since she gave me the idea.

You did say no heat limits, right?

Crumpled rose petals settled in the dirt around her slippers. Beads of moisture gathered on her neck from his hot breath as he leaned over her.

“Don’t look at me like that. Your father sinned, not I.” His eyes, dark as rain soaked bark, narrowed when she shook her head. “You surrendered yourself to me willingly to spare him.”

Tears spilled as Belle stared at the metal trellis in the center of the rose garden, with chains woven through it like vines and four shackles wrapped in silk and fur dyed the color of the blossoms. Her gaze dropped to her feet and she shivered, imagining those chains around her wrists and ankles, displaying her, naked and helpless before this...this...Monster.

“Oh, I can.” He tilted her head back and studied her for a moment. Lips curved, he trapped her wrists in one, big hand. “But do not fear for your innocence. I would not take it from you with this animal form.” He drew her hands over her head, shackling one wrist, then the other. “But watching you writhe and enjoy the pleasure none other can give you...” His smile full of fangs seemed almost tender. “Perhaps that will be payment enough.”

Belle gritted her teeth as he crouched to shackle her ankles, tightening the chains so her legs were pulled apart. “You could never please me.”

The beast smacked her thigh. “You will not speak.” He smirked when she tugged at her restraints, hips jerking towards him and away as she fought her own reactions. The sweet essence of her arousal filled the air between them. Beast inhaled deep and straightened. “Unless the pain becomes too much or you are truly afraid. Then you may say ‘Rose’ and I will stop. Do you understand?”

No words came to her, so she simply nodded. And took the punishment, screaming and crying when the strike of the paddles or whips teetered on the edge between pain and pleasure.

But she never said ‘Rose’.

The glass slipper covered her toes and her sweet little heel like crystal moulded to display the perfection of her dainty, little foot. He had to take it off. He’d wanted to ever since his first glimpse of one bare when she’d lost her slipper after the ball.

Beneath them, the wagon wheels creaked and thumped on the craggy road. Cinderella reclined on the gold brocade, padded seats and crossed her ankles. His eyes leapt from her feet to her face. Her brow creased and he forced a smile to his lips.

It wouldn’t do for his new princess to think him odd.

His heart flipped and flopped up into his throat when she kicked off the slipper and wiggled her toes. The sight had him staring. He couldn’t help it.

“I’ve never had a man look beyond my breasts or my ass like that.”

The prince tore his eyes from where they caressed her sleek arc, his mouth watering. “Does it bother you?”

“Not at all.” She rested her foot on her knee and flexed it, gaze fixed on his crotch as his rock hard dick stirred. “Would you like to touch?”

“Oh, yes.” His hands covered her foot, massaging that flesh, so soft in places, textured and rough in others. He traced each delicate bone with his fingers in an attempt to cast the wondrous image to memory.

She twisted her ankle and freed her foot.

No, not long enough!

“That was...all right.” A half smile on her lips, Cinderella braced on her elbows and swung her foot under his chin. “Now how ‘bout you do that again. With your tongue.”

He groaned and caught her big toe with his mouth. His tongue circled the plump end and he sucked his way up and down. Then he released it with a plop and grinned.

“Have I told you how much I love you?”

Well that was just tons of fun. Fairy tales are kinky in the most wonderful way. All it takes is a bit of imagination.

Hope you have some fun with your bedtime story tonight. 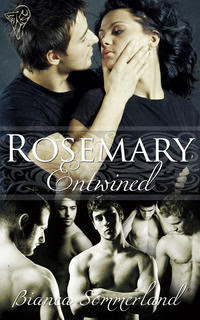 Bianca Sommerland was born and raised in Montreal, Quebec. When not reading neurotically or writing as though the fate of the world rests on her keyboard, she is either watching hockey or teaching her daughters the beauty of a classic, steel pony while reminiscing about her days in Auto Body Mechanics.

Her time is balanced with utmost care between normal family life, and the internal paranormal realm where her characters reside. For the most part, she succeeds. She is currently working on a risqué new ménage novel called EMBRACING EVIL. You can find her at http://imnoangelauthorsblog.wordpress.com/

Welcome to Beyond Romance, Bianca!

What a great post! Rosemary Entwined sounds seriously hot, too!

You've inspired me to try and write a kinky fairy tale snippet of my own. I'll post it over the next day or two and let you know.

Congratulations on the release!

Thank you Lisabet and Sweet Vernal! This is my favourite post on the blog tour. I have two other posts on the tour with snippets, but exploring a bit of kink made this one the most fun!

I'm planning on adding a snippet page to my blog now for a Snippet Sunday. Got to dedicate it to you Lisabet for inspiring me.

I can't wait to see what you can do with a fairy tale snippet! I'll be checking back often ;D

Bianca - my sweet Mom who died when I was young said she loved Quebec. I need to put visiting there on my 2011 Creative Board.
I loved ur idea to put ur own writerly spin on the classic fairy tales.
I sometimes get so weighted down by trying to be original, I forget how much fun it is to play with already formed ideas. So, thanks and a wonderful New Year to u and Lisabet!...Mary Kennedy Eastham, Author The Shadow of a Dog I Can't Forget, the upcoming novel Night Surfing and the yet-to-be-written third book The Girl With Sand in Her Hair

Wow, Bianca! I'm impressed. I loved all of them! Rosemary Entwined sounds like a hot, and interesting, read! Congratulations.

Always enjoyed fairy tales... Rosemary Entwined sounds like a very interesting twist... I have to look into your books, have not had the pleasure of reading them! Thanks for sharing!

Word Actress, I love living in Montreal and you really should visit. The culture itself is worth the trip. As for being original, remember-Nothing ever is original originally, it only becomes so after the individual twist (I hope that makes sense. My head liked it. Lol)

Thank you Lynn! I find writing always comes out better when you enjoy yourself doing it and I had tons of fun with these idea. Rosemary Entwined was fun too, and I think it will show ;)

Rosemary Entwined is my first published book Colleen, but there are many more to come. I’m so happy you’re interested though. Nothing validates a writer more than that (in my opinion anyway).

You've already got me hooked with your take on Sleeping Beauty, and I loved these two stories as well.

You should check out my Sunday Snippet then. I did Return to Wonderland yesterday :)