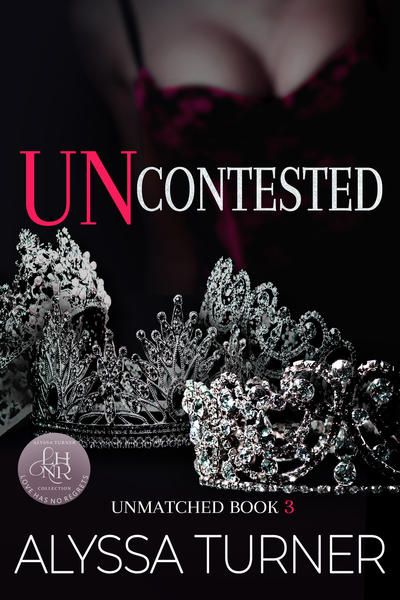 Their pet has grown out of her collar

Five kings, and in the absence of one, four have fallen for the same woman. Oleg Balashov and Dr. Henri Gerard have the pleasure of calling her their pet, only Samantha Hunter doesn’t quite fit the description. She's neither pet nor feral, neither predator nor prey, neither submissive nor dominant. Samantha is all those things in one, and she doesn’t want to choose.

Five Doms, and two share a spark that won’t go away. But Ivan Galois’s secret shame has turned into rage, and only the Dom who knows him best, Paolo Signorino, and Samantha, the woman who shares his worst nightmares, can slay his demons.

It’s a new day at Club Duval, and the game has a whole new set of rules.

Uncontested is the conclusion to the Unmatched Series.

Note: Subjects of a dark and explicit nature are discussed in this book, including past traumas and the effects of abuse.

“Uncontested (Unmatched #3) is the fantastic final book in this deliciously thrilling and exciting, must read trilogy!” ~ Jill, Goodreads

“Turner is able to give us everything we wanted and needed in this epic conclusion of the Unmatched series.” Amanda, Goodreads 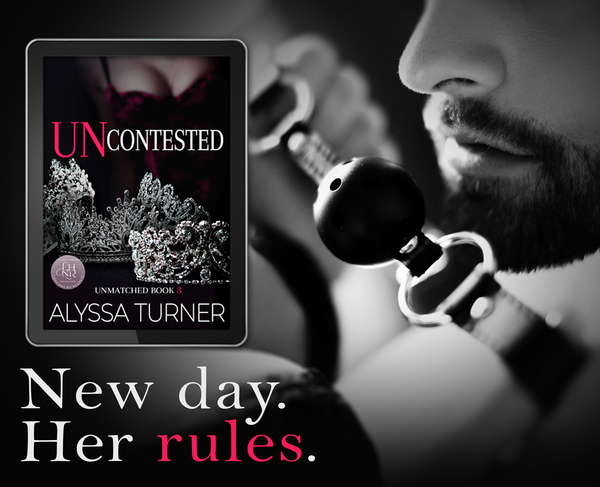 Oleg remembered when she’d marked herself with an “O” in his honor back in Quebec and thought of the irony. Today, she hadn’t cut Ivan deep, though he bled some from the superficial wound. The “L” was for Lionceau, clearly. Not so clear was what this meant. But she was smiling, and nothing else was important. He’d let her have anything that put a smile back on her face.

That didn't seem right somehow, but he shook off the thought. Oleg hooked his finger into the ring on her collar and drew her close. He took her mouth hard, the way he usually did. The way he had before all of this had happened. Inside his trousers, his cock strained to break free.

Now it was time to revel in the spoils of her delight. He took hold of her hair in one large fist and paused a moment to search her eyes. What was he looking for? The blue of her irises burned bright and alert, full of life, and the curl of her lip was all dare. It was back. The fire he found so irresistible. With his other hand, he tugged open his belt and pants.

“Yes, please,” she said so sweetly, it gave him goosebumps.

Oleg let out a grunt and brought her mouth down onto his throbbing dick. She sucked him greedily, placing her hands on his waist for balance.

He heard fabric tearing and caught a glimpse of Henri splitting the seam of her leggings and pushing aside her thong. The Kitty ears blade he’d used to cut the fabric was now held between his bared teeth until he was satisfied he wouldn’t need it again as he ripped away more of the fabric. Then he placed it down, and his hand was between her legs next.

“Baby, you are wetter than I’ve ever seen.”

He crouched down and pressed his face into her ass. Samantha moaned around Oleg’s shaft, and Oleg gripped her head tighter.

“Your mouth, your cunt, your ass, all of you belongs to me. I share your heart, and I share your body, but nothing that could ever happen will erase the fact that you are mine. My name is written on your soul. No one can ever take that from me. Never fear that it’s even possible.”

Henri rose back up and lowered his pants just enough to free his dick. A fever seemed to be running through the room, making everyone too impatient to undress. He dug his fingertips into the flesh of her ass when he pressed into her.

“For me, Samantha, it’s as if your essence runs through my veins. There is nothing that can separate us. Know that you are always with me. I can always feel you.”

Oleg nodded at his friend, in concert with his sentiment. Then he tipped her chin. “Let me see your eyes, Lionceau.”

Samantha looked up at him through her lashes.

“How much do you like to be filled at both ends by the men who will give you everything you will ever need?”

He pulled her head away so she could speak.

“Show me,” Oleg said and pressed her mouth back onto him.

She took him deep, swallowing around his dick.

Oleg was so lost in the sensation, he hardly registered the action a few feet away, but Paolo’s roar tore into the room, causing Oleg to look that way. Paolo had both his hands wrapped around Ivan’s face as he pumped his hips and released down his throat. It was shocking to see Ivan on his knees, his mouth full of Paolo. In that moment, Ivan was a stranger to Oleg, as if hardened layers had been pulled back to reveal tender, virginal flesh. A switch. He’d never imagined.

Beneath him, another switch panted in the onslaught of Henri’s thrashing against her ass cheeks. He’d seen it in her early, even called that part of her out to play and been charmed by the sight. She’d been like the little lion pouncing on butterflies in a grassy field while he watched, entertained. That’s how he’d seen her, at least. What happened with Ivan was different. Ferocious as any of them, she’d owned that scene like a true Domme.

But she bowed for Oleg and was putty for Henri. The privilege could never be underestimated.

Alyssa believes when characters speak to you, you've got to listen. She's been all ears and writing stories in all lengths since childhood. She only wonders where those notebooks of handwritten dramas ended up.

Almost everyone tags her romances as habanero hot, and with her proclivity for the ménage genre, Alyssa is often recognized for weaving complexity and emotional depth into her characters. She has so much fun writing, she can never be relied upon to put the wash into the dryer any time after 10 PM. Luckily, she is married to the most understanding husband in the world.

The Love Has No Regrets collection of novels by Alyssa Turner includes several series with familiar characters threaded into each story. Her LHNR world is ever growing, spanning from Manhattan to Paris, with Polyamorous love that answers only to the heart. Read more about Alyssa Turner and preview her published works on her blog. http://www.alyssaturnerwrites.com

I adore your tag line! Hope the new release does really well.