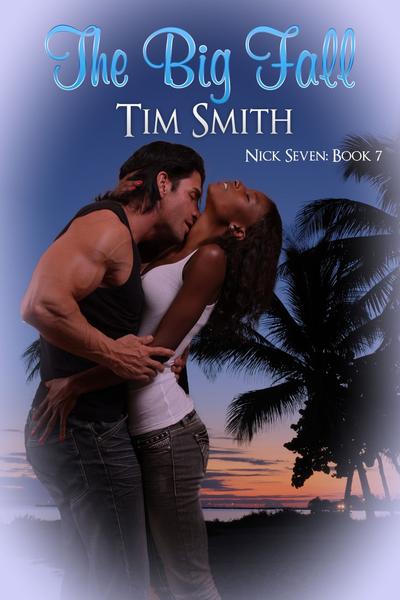 He’s as cool as a Piña Colada on a Key West beach, he’s the kind of guy your mother wouldn’t let you play with, and he’s every bad guy’s worst nightmare. Nick Seven is back in The Big Fall, the new romantic adventure from Tim Smith. This is the latest installment in the popular series featuring two former spies trying to keep a low profile in the Florida Keys, but not having much luck.

Just when you think life can’t get much better, a crashing wave wipes out your sand castle. Former spies Nick Seven and Felicia Hagens are taking a break from Key Largo to visit a casino owned by Nick’s friend, Rock Bianco. An unexpected, nasty encounter with one of Nick’s former lovers turns disastrous when she’s killed shortly afterward. The police and the girl’s wealthy father are convinced that Nick did it, despite the lack of hard evidence. The billionaire industrialist wages an online smear campaign to make Nick look guilty, including sordid details from his past career in the CIA. The stakes become more personal when the fallout impacts Felicia, testing their relationship. Nick fights back, but why is the man determined to hold him responsible for his daughter’s murder? Who really killed her, and why is their identity being shielded? Can Nick and Felicia resolve this crisis and reclaim their idyllic life in paradise?”

This is a different kind of story for this series, because Nick and Felicia don’t get involved in international intrigue or a criminal plot. Nick is being set up as the fall guy for a murder he didn’t commit, and must use his skills to clear himself and reveal the real killer. The villain du jour is an arrogant Miami billionaire who uses his mega-bucks to get what he wants, manipulates the media for his own benefit, and crushes anyone who gets in his way. Unfortunately, this time the target happens to be Nick Seven.

At the core of the story is a strong romance between Nick and Felicia, his former co-worker from Barbados. The situation they’ve found themselves in threatens their relationship, but ultimately brings them closer. There is a lot of teasing, flirting, humorous dialogue, and the requisite hot sex.

Nick walked into the darkened living room. Felicia had put some light Latin jazz on the stereo and lit a scented candle. She slinked toward him and draped her arms over his shoulders.

“This looks very cozy and romantic,” he said.

Felicia caressed his cheek with her palm. “I thought we’d stay in since we’re still on vacation. You okay with that?”

She stepped back, took his hands in hers, then pulled him into the middle of the room. Felicia began a slow dance, gently swaying her hips in time with the Bossa Nova beat. Nick picked up her cue. He wrapped one arm around her waist and put the other on her shoulder, then moved in rhythm with her.

“What brought this on?” he asked.

“You never take me dancin’.”

He pulled her closer and got into their passionate embrace. Felicia rested her cheek on his chest and Nick inhaled the pleasing combination of musky cologne and her natural body chemistry. He moved his hand up to massage her neck under her long hair. Felicia purred softly and undulated against him while rubbing her palm along his shoulders. Nick felt a stirring in his groin the longer they danced, engaging in intercourse on their feet.

He tipped Felicia’s head back slightly and kissed her on the cheek. She moved her lips to his and hungrily embraced them, letting her tongue do an exploratory mission into his mouth. Nick felt closer to her than he had in a long time and his arousal increased when Felicia rubbed against his crotch. She put her hand on the back of his neck and pulled his mouth closer, increasing the intensity of her kisses.

She danced him backwards to a bar stool and prompted him to sit, not breaking their passionate oral embrace. Nick pulled Felicia onto his lap and devoured her soft tasty lips. After a couple of minutes, she stood, then cupped his chin in her palm. The music changed to a slow salsa and Felicia’s eyes seemed to take on a sultry glow.

Nick watched as she unbuttoned her shirt while maintaining eye contact. She pulled her top aside to reveal her firm braless breasts, her nipples stiff with anticipation. Felicia swayed her hips in rhythm while unfastening her slacks. She teasingly pulled them down her legs, then kicked them off, showing her black lace thong. She leaned forward and let her hair fall about her face, then ran her long fingers through her mane and tossed her head back as she stood before him. She slowly ran her hands over her breasts then along her firm stomach while swaying with the music. Nick felt himself getting more aroused the longer she performed her sensual dance.

This story drew inspiration from current events, especially the influence of social media and how some people use it for their own good at the expense of others. There’s also an homage to one of my favorite dramas, Law & Order, and some nods to film noir crime capers. Add in tropical Florida atmosphere, from the oceanfront sands of Fort Lauderdale to the laidback ease of The Keys, and you have all the necessary ingredients for an entertaining read.

Thank you for the kind words, and for having me as your guest today, Lisabet. It's always a pleasure to be here.