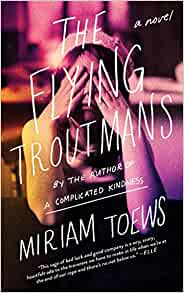 Sane families are all alike; every crazy family is crazy in its own way.

With apologies to Leo Tolstoy, this could well be the tag line for Miriam Toews’ original and moving novel, The Flying Troutmans.

Hattie Troutman is living in Paris, trying to adjust to being dumped by her boyfriend, when she gets a long-distance call from her eleven year old niece Thebes (short for Theodora) in Manitoba. Hattie’s older sister Min has, once again, descended into severe depression, leaving Thebes and her brother Logan to cope alone. In fact Hattie has fled to France to escape from her apparent inability to help her brilliant and disturbed sibling. However, she can’t leave the two kids without supervision, despite the fact at twenty six she’s aimless, confused and hardly feels like an adult herself.

She arrives to find everything including the house falling apart. Min had been hospitalized and won’t speak to Hattie or the children. Logan’s about to be expelled from school. Thebes hasn’t taken a shower in a week.

Desperate to do something, Hattie piles the kids into their aging Aerostar van along with a slew of music CDs, a box of art supplies and a cooler of soda. They hit the road to look for the kids’ long-lost father Cherkis, who disappeared into the vast U.S. after Min kicked him out. Following rumor and instinct, the Troutmans zigzag through the American heartland – South Dakota, Wyoming, Colorado, Arizona, finally making it to the Mexican border – in a quest that doesn’t really bring them any closer to solutions, but does help them understand how much they love and need one another.

The description above doesn’t really do this book justice, though. All the characters are bizarre, quirky, and extreme. Thebes and Logan (who’s a moody, hormonal fifteen year old) have a precocious intelligence and unfettered creativity that make their conversations a gift. Hattie has no control over them – indeed, very little over herself – as she stumbles along, trying without much success to play the role of competent guardian. The shadow of Min hangs over them all: Min who has tried to kill herself so many times that she’s bound to get it right eventually.

I thought about pulling some quotes into this review, but discovered that the stream-of-consciousness flow of the novel doesn’t lend itself to carving out snippets. Suffice to say that this book is a joy, even when the themes are dark and the times apparently desperate. The Flying Troutmans provides grace and humor on every page. The kids are annoying, sometimes even disgusting, yet you cannot help but adore them. And maybe, as I did, you’ll feel a sense of kinship, a familiarity that reminds you’ve experienced some of this sort of insanity in your own family.

I highly recommend The Flying Troutmans. It might well bring tears to your eyes – it did to mine - but it will also leave you smiling.