Review Tuesday: Down and Out in the Magic Kingdom - #ScienceFiction #ReviewTuesday #FreeReading 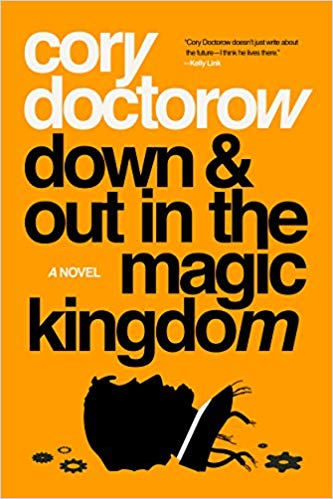 Down and Out in the Magic Kingdom by Cory Doctorow
Tor Reprint, 2018 – Original publication date, 2004

What if you were effectively immortal? If, in the event of a fatal accident or disease (or murder), your backed-up consciousness could simply be reloaded into a young, cloned body? You’d have centuries to create new things, to learn new skills, to explore – or to get permanently bored and choose voluntary death.

What if money had disappeared, and instead, the world ran on a currency of reputation? If your wealth was measured in the number of likes you got, the number of shares, claps, stars and badges allocated to you by other members of society? The shy and retiring among us would be penniless, the smartest, most creative, most altruistic or most outrageous people, billionaires.

What if you’d dreamed your entire life of living and working in Disney World, and finally managed to make that dream real?

All stories have their genesis in speculation, but science fiction, especially, is driven by “what ifs”. Every scifi tale postulates an alternative reality – future, present or past – which differs from everyday experience in some fundamental ways. The best science fiction chooses questions that are both intriguing and have some moral importance. Down and Out in the Magic Kingdom, by Cory Doctorow, falls into this category.

Jules, the protagonist, is a mere century old. Though he has been rebooted four times, he still remembers the world before the genesis of the Bitchun Society. And although he now lives in a world where your level of Whuffie determines both your influence and your quality of life, he’s old-fashioned in some ways. He sticks with his friend Dan through highs and lows of reputation. He’s squeamish about the notion of deadheading – abandoning your body and bottling up your consciousness for a few centuries or millennia, when things start to get boring. And he’s sentimental about the primitive but emotionally compelling attractions of twentieth century Disney World. He cares enough about the legendary Haunted Mansion that he’ll go to war and lose everything, trying to save it from being modernized and virtualized.

I don’t want to spoil your experience of Down and Out Etc. by telling you much more about the plot. Doctorow’s alternative, Whuffie-driven, world is eerily familiar in some ways, though the book predated the social media tsunami by more than a decade. The book considers whether electronically mediated experience can ever have the same value as direct interaction with the environment – and leaves that question open for the reader to decide.

We haven’t gotten to the point of backing ourselves up for future download, though the confluence of brain science and artificial intelligence might be moving in that direction. Doctorow explores some peculiar consequences of such technology, were it to emerge. For instance, the longer you go between backups, the more of your memories you’ll lose if you have to do a restore. Meanwhile, someone can perpetrate a horrific crime, then restore from a backup made before the deed, and literally have no memory of the event.

Down and Out Etc. isn’t perfect. It relies too much on a familiarity with Disney World and its attractions, which I don’t possess. Its economic model may be a bit too optimistic, as well. I think the economy posited in Doctorow’s more recent novel Walkaway, in which the zotta-wealthy cling jealously to the world’s resources, seems more plausible. On the other hand, the characters in this novel are much more vivid, believable and flawed than those in the later book. Down and Out in the Magic Kingdom, like all my favorite science fiction, is a book about ideas, but it’s also about human beings, love, fantasy and friendship.

And by the way – the author, who is a strong proponent of Open Source, has made the book available for free via Project Gutenberg. You can download it, in several different ebook formats, from here.

Email ThisBlogThis!Share to TwitterShare to FacebookShare to Pinterest
Labels: Down and Out in the Magic Kingdom, free reading, Project Gutenberg, Review Tuesday, science fiction