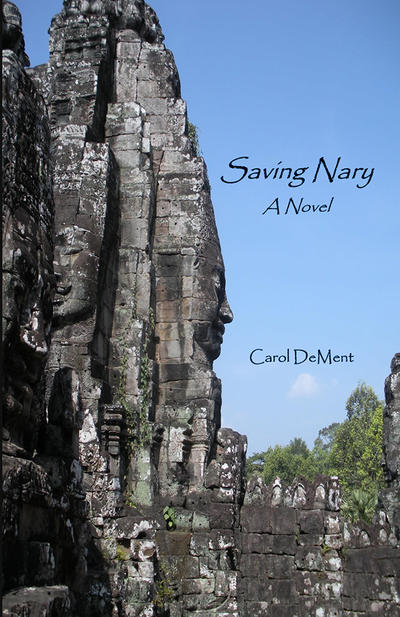 When she signed up to host my blog tour, Lisabet asked me about my experiences with Cambodia—the unforgettable experiences that led to my writing Saving Nary.

I met my first Cambodian family when I was in my mid-twenties. I was in a funky spot—life was turning out to be harder than I had imagined it would be: I had not met Mr. Wonderful yet, nor made my first million. So I decided to volunteer to teach English to refugees to take my mind off myself for a change.

Boy, did it ever. I was shy, and faced my first class of ten with shaking hands and knocking knees. And then I looked into their faces, into their eyes, and saw ….hope. Hope for a better life and a chance to raise their children in peace. Hope for a full pantry and a secure place to lay their heads at night. Hope for a future free of bombs dropping, machine gun fire, and terror at the hands of a torturer.

All of a sudden, my life looked pretty rosy.

My students invited me to their home for a meal. We sat on mats and ate from a “table” made of newspapers spread out on the living room floor. I will never forget the young woman who held a baby in her arms, telling me in broken English as tears ran down her face how the Khmer Rouge had killed her family. Her vocabulary was limited, but she knew the words she needed to tell her story: gun, machete, dead, torture, starve, blood.

As I continued to work with refugees from Cambodia, I heard again and again how much they had suffered under the Khmer Rouge. In 1984, a major motion picture, “The Killing Fields”, focused attention on Cambodia’s tragic history, but it soon faded into obscurity.

Writing Saving Nary is my attempt to bear witness to that young woman’s story, told to me so many years ago. In researching the novel, I visited the refugee camps in Thailand and the killing fields in Cambodia, trips that only heightened my desire to keep this history alive. What happened in Cambodia and the consequences of the tragedy there hold lessons that we would do well to learn, lessons about the abuse of power, about resiliency and reconciliation, about the human spirit and the will to strive for a better life.

Thank you for inviting me to guest blog on your site. I hope you enjoy reading Saving Nary!

A Finalist in the 2017 Next Generation Indie Book Awards, Saving Nary explores the losses, loyalties and secrets held within families broken by war and genocide. This compelling novel presents a palette of unique characters who struggle to make sense of the events that led them to America, even as they ponder the bewildering culture and lifestyle of their new homeland.

Refugee Khath Sophal lost everything when the Khmer Rouge swept into power in Cambodia: his livelihood gone, his family dead or missing; his sanity barely intact from the brutality he has been forced to witness.

Now resettled in the Pacific Northwest, Khath treads a narrow path between the horrors of his past and the uncertainties of the present. His nights are filled with twisted dreams of torture and death. By day he must guard constantly against the flashbacks triggered by the simple acts of daily living, made strange in a culture he does not understand.

Then Khath meets Nary, a mysterious and troubled Cambodian girl whose presence is both an aching reminder of the daughters he has lost, and living proof that his girls, too, could still be alive. Nary’s mother Phally, however, is another matter. A terrible suspicion grows in Khath’s mind that Phally is not who or what she claims to be. A split develops in the community between those who believe Phally and those who believe Khath. And those, it seems, who don’t really care who is right but just want to stir up trouble for their own personal gain.

Khath’s search for the truth leads him to the brink of the brutality he so despises in the Khmer Rouge. His struggle to wrest a confession from Phally ultimately forces him to face his own past and unravel the mystery of his missing daughters.

“Go back to Cambodia?” Pra Chhay stared at Khath with puzzled eyes.

Khath nodded. “What choice do we have, brother?” he said. “Our people are being forced back across the border into the arms of the Khmer Rouge. My daughters will have no chance now to get into Khao I Dang. We must go back to continue our search for them.”

Pra Chhay, dressed in saffron monk’s robes and cracked rubber sandals, stood framed by the setting sun outside the open doorway of the bamboo and thatch shelter he shared with Khath and ﬁve other families. The odor of too many human bodies crowded into a small living space hung heavy in the air spilling across the threshold.

The rectangular shelter was partitioned by side walls into six open-faced cubicles, three to a side, facing a center corridor running the length of the shelter. There was no privacy other than what could be attained by turning one’s back to the open side of one’s cubicle or crawling inside a mosquito net hung over the thin kapok sleeping mattresses on the ﬂoor. The shelter’s only doors were located at each end of the central corridor, opening directly to the outside.

With no way to secure themselves or their meagre belongings, the refugees lived in helpless fear of night visits by bored Thai soldiers, whose transgressions ranged from theft to rape. Pra Chhay and Khath occupied an end cubicle by the door, making them even more vulnerable to unwanted attention from the soldiers, but because of Pra Chhay’s position as a monk, they were usually left alone.

As Pra Chhay slipped his calloused feet out of his sandals, stepping barefoot into the corridor, a gentle breeze puffed out the hem of his robes and blew camp dust into the shelter.

Khath motioned to Pra Chhay to shut the door. Careful not to waste a drop of the day’s ration of precious water, he barely moistened the corner of a rag and ran it over random surfaces in their cubicle that might attract and harbor dust: the wooden altar in the corner, the cracks and edges of the bamboo slats that formed the walls of the hut, the straw mats that covered the ﬂoor. A squat wooden bench, left behind by the prior resident, completed the amenities of the living space.
Pra Chhay took off his outer layer of robes and hung them on a sliver of bamboo pulled out from the wall to serve as a peg for clothing. Turning, he watched Khath rub his cloth over the wooden bench, back and forth, back and forth, harder and harder, the knuckles gripping the cloth turning white with effort.

“Khath, stop it. You will polish our only seat away to nothing,” Pra Chhay said. “Tell me exactly what you heard today that makes you say we must return to Cambodia.” The monk settled himself comfortably on the ﬂoor.

With an effort, Khath slowed his rubbing and carefully folded the rag and laid it on his lap. His eyes followed the tiny particles now dancing in the single ray of golden sun that slipped through the crack between the outer door and its frame. He laced his ﬁngers tightly together to stop their reaching for the rag as, mesmerized, he watched the motes settle onto the areas he had just cleaned. The sight of dust on surfaces where it ought not to be was still intolerable to Khath, though nearly six years had passed since his obsession was born on the day the Khmer Rouge killed his wife and son.

“Silence that boy,” the soldier had said to his wife on that awful day. Khieu gathered their son Bunchan into her arms, but how is one to soothe a toddler who cries from hunger when there is no food? Khath, Khieu and their three children had been walking for three days in the heat and humidity, shoulder to shoulder with thousands of other refugees inching their way out of Phnom Penh by order of the Khmer Rouge. Already hunger, thirst and exhaustion had thinned their ranks: the elderly and the ill simply dropped along the sides of the road, patiently awaiting the mercy of death.

Given only minutes to prepare for their exodus, the food Khath and his family carried was gone in a day. After that, they bought, scavenged and bartered for whatever nourishment they could ﬁnd along the way. Now, they stood next in line before a table of grim-faced cadres in the simple uniform of the Khmer Rouge: black cotton shirts and pants with kramas, red-checkered scarves, wound around their heads or necks. The cadres were checking identity papers and quizzing the refugees about their prior occupations.
Bunchan’s incessant crying enraged the soldier. “Silence him or I will,” he warned Khieu.

Carol DeMent worked in the field of South East Asian refugee resettlement for seven years, and completed master's level research into international refugee resettlement policy. She lived for two years in Thailand as a Peace Corps volunteer and has traveled extensively in South East Asia. Her first novel, Saving Nary, was a Finalist in the 2017 Next Generation Indie Book Awards.

Carol DeMent will be awarding $10 Amazon/BN GC to a randomly drawn winner via rafflecopter during the tour.

Thank you for the excerpt.

Who is your favorite literary character? Thanks for the giveaway. I hope that I win. Bernie W BWallace1980(at)hotmail(d0t)com

Thanks for sharing the excerpt!

I traveled to Cambodia in 2005. I was struck by the fact that people are still scarred by the horrors of the Khmer Rouge era. It was hard to get people to smile, and people are still desperately poor.

I hope your book stimulates people to explore the history and culture of this fascinating country.

Also, I hope your blog tour is a huge success!

thanks for the chance

I enjoyed reading the excerpt to get to know your book; best wishes on the tour and thanks for the chance to win :)

Amazing experiences. Thank you for sharing.

What book would you like to see a sequel to? Thanks for the giveaway. I hope that I win. Bernie W BWallace1980(at)hotmail(d0t)com

What is the most overrated book that you have ever read? Thanks for the giveaway. I hope that I win. Bernie W BWallace1980(at)hotmail(d0t)com

I really enjoyed the excerpt, thanks for a great post.