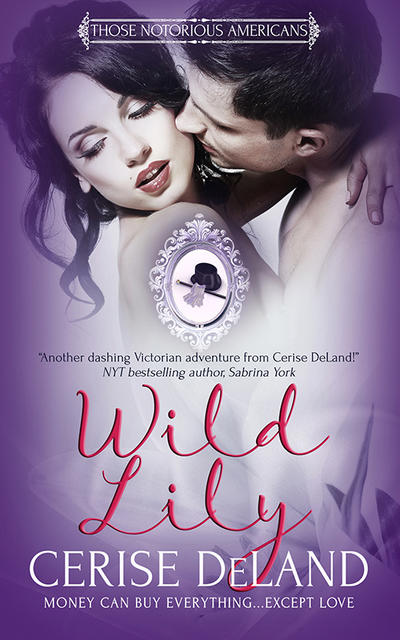 I'm tickled to announce release of WILD LILY, just reviewed by The Romance Reviews with 5 Stars!

Beginning a Victorian romance series, Those Notorious Americans stars a family ready to charm all of Europe with their wit, their good looks…and their fortune.

Here’s a limerick to typify the series:

Find an heiress a duke, a marquess or count,


A baron'll certainly do, never doubt.


But a prince'd be too high


Cuz love's rare for a gel without clout.

Money can buy anything. Can't it? When American robber baron Killian Hanniford decides to expand his business empire, he sails to Europe in 1877 and takes his family with him.

His two daughters—Lily and Ada—are beauties, accomplished and educated. They want for nothing, except a chance to find husbands who love them for themselves, not their dowries.

His niece, Marianne, is a charming widow who wants for nothing…except perhaps an amusing and temporary lover.

Killian’s son, Pierce, is young, impetuous and too ruthless for any young woman to take on as a husband.

Even Killian himself—without a wife for many years but increasingly bored by his mistress—is shocked to learn he can fall in love.

Tragic, isn’t it, to learn that money can buy anything… but love?

Lily Hanniford has all the qualities an impoverished nobleman could want in a wife. She’s beautiful, educated and funny. Too bad, she has a penchant for riding astride like a man. Too bad, she’s an American with a shrewd, wily father. But she’s unwilling to be sold to the highest-ranking nobleman. She wants a purpose in life…other than presiding over a drafty castle and a loveless marriage bed. Then she accidentally meets a man she can’t resist.

Julian Ash, Marquess of Chelton, doesn’t need a wife. He needs luck at cards…or a way to persuade Killian Hanniford to pay more for his family’s shipping line. But Lily is charming and her wild streak appeals to Julian who has always followed the society’s rules. Now he discovers that being wild with Lily is not only fun, it’s necessary to his life. And so is she.

They struggle to throw convention to the wind. But can they be wildly happy together if they can’t heal old wounds?

"Ms. DeLand's WILD LILY is as pleasing to the ear as it is to the eye. It's rare to call an historical erotica romance a delight but this one was downright gleeful to my love of language." ~ Gabrielle Sally, The Romance Reviews 5 STARS http://erotic.theromancereviews.com/viewbooks.php?bookid=25728

They ran like children along the stone path up to the servants back door of his country house. It was unlocked and Julian thrust it open, pulling Lily inside.

“Come. Here’s the kitchen. No fire, but it’s warm and dry. Sit there.” He looked her over. “You’re drenched. Hell.”

He took four huge strides, disappearing into another room and clanging about. If he kept up that racket, the whole house would soon be awake.

She rubbed her arms, grateful to be out of the storm, but wary of servants who might have been roused.

When he returned, he had his hands full of toweling.

Grateful to be rid of the blanket that smelled of horse, she shrugged it off and folded it. He hurried to wrap a large towel over her head.

She giggled. “You could wake the dead the way you scoured that room.”

“My housekeeper is quite deaf.”

“Not at all. She’s never been quick to any sound.” He scrubbed her head with too much dedication.

“Ooof.” She picked up a corner of the towel to glare at him.

“Sorry. You need to dry your hair.” He rubbed her scalp.

She clamped her fingers around his wrist. “If you don’t stop, sir, I’ll be bald!”

She balked. She had removed her corset for this adventure and if she took off her jacket, it would be apparent that she was a rather loose woman. In more ways than one. “Ah. I don’t wish to. Unless… Do you have anything to replace it?”

“Not yet. I will.” He dropped another towel around her neck.

“No. You will not.” He began to pick at the buttons on her coat.

She slapped his hands away. “Stop that.”

“You do it then. I’ll not have you die of cold at the risk of a layer of clothing.”

She clutched her stock to her throat. And true, it was wet, but she had few choices here. “It’s not just any layer.”

Confusion overtook his brow. “What?”

“Can you please find me another coat?”

“I will if you promise to begin to unbutton that now.”

He stood. “I’ll be back with brandy and when I do, you’ll have that jacket off.”

“Fine, fine.” Fretting over that, she undid her last two buttons. Beneath it, the cold cotton of her blouse was damp. Under that, her skin was ablaze with the delicious nature of her predicament. But what Julian didn’t know was a good thing. “Hurry, please.”

He left her, ran up the steps and away. In the silent house, she marveled that no one had yet heard them. How many servants did he have? And were they all deaf?

She shrugged out of her jacket, covering her wet blouse and her beading nipples with the ends of a towel. Shivering in the damp cotton and trying to focus on how soon she’d be warm didn’t work.

Julian returned within minutes, a large coat in one hand and a man’s shirt—his?—in the other.

“I can’t wear that.” She had admired his form, his broad chest, his muscular build. He was fit, firm, a marvelous example of manhood, but she was more than adequately endowed. And his shirt, tailored as it was, would not adequately cover her attributes.

She ground her teeth. “It won’t fit.”

He had this odd expression on his face which by infinite degrees turned to recognition and then, he laughed.

She tapped her foot on the stone floor. “You’re not helping, dear sir.”

Still chuckling, he stepped toward her and put his hands around her waist to draw her to her feet. “I see that. I am sorry.”

She couldn’t help but cuff him. “Take me back.”

“As I am, yes! Now.” She took his hand and marched them both toward the window.

But lightning streaked the sky and a loud boom shook the house.

Against his all too solid chest.

He embraced her, one hand in her hair, one cupped her nape and the lure of his warmth was irresistible. She sank against him, reveling in his support. He was assurance and beneath his riding pants, he was aroused.

She didn’t want to move or even breathe. Could he find her attractive? Still? Even though she’d told him at the opera to ignore her? He certainly did find her company appealing. Much as she’d always declared she’d never tolerate a man as demanding as her father, she liked a man with a mind of his own.
This man.

“I like you,” she told him astonishing herself for saying what she felt for him.

He trailed his fingers up into her hairline and turned her head toward him.

“We are neither of us very clever.”

“Lily,” he said her name, a plea more breath than sound. “Lily, darling. Shall we be more than honest?”

“Oh, Julian.” In the dim light, she could make out the fire in his beguiling eyes. To wait any longer to taste him would be a waste. Casting caution to the wind, she swung totally into his embrace and pushed up on her toes. She slid her arms around his shoulders, the towel falling to the floor, and with only hot urgency between them, she said, “Yes, let’s be.” 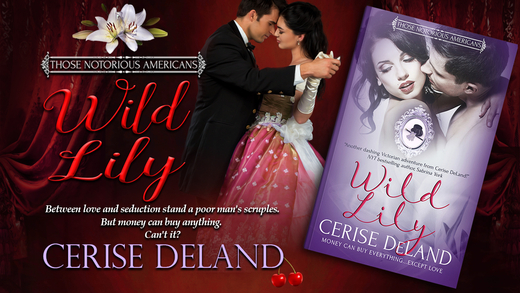 This sounds like so much fun, Cerise! I love independent heroines who aren't afraid to break the rules of society.

Hope it does really well.