Thank you for inviting me over, Lisabet. It’s always a pleasure to join you.

I’ll admit it, I talk to myself. It’s gotten so bad that when I’m thinking through a story, I even forget I’m in a public place and just keep on talking. The thing is, I find conversation with myself often enlightening. You know what it’s like to talk through a problem with a friend, or even just discuss something that’s important to both of you. It’s not unusual to walk away from those talks with new insights and deeper understanding.

I find that conversation with myself is not all that different. Sometimes by talking things through, I find solutions I hadn’t expected, inspiration from bits of internal dialogue. This happens often enough, in fact, that sometimes I do feel like I’m talking with someone else. Sometimes the conversations become brainstorming sessions. Sometimes they devolve into arguments, and I find that I don’t always get along with myself. Those are the most difficult times, when I have to figure out how to make peace with me.

In some ways I think those conversations we have with ourselves are the grown-up version of the imaginary friends we had as children. At times, whoever I’m talking to inside is a really scary bitch. Other times I think she’s bloody brilliant. I’ve made no bones about believing my Muse is a vicious, sadistic woman who delights in egging me on and poking me in the ribs with a big pointy stick. She seldom changes out of her dressing gown, and she chain smokes filterless cigarettes. While I wouldn’t exactly call her an imaginary friend, she gets the job done.

Of course, I know she’s me. I’m not quite ready for the rubber room yet. But I also know that she’s a different part of me, a part that offers me tough loving, sadistic inspiration that keeps me tunnel-visioned and writing into all hours. This post is not to say that my strange relationship with my Muse inspired the first two novels of the Medusa’s Consortium series…. But… Maybe.

I wanted a glorious Muse – broad shouldered, sexy, dark hair, sizzling smile. I wanted to be seduced into writing and then rewarded with more seduction for my efforts. I think, as much as anything the Guardian – the demon who is imprisoned inside my Scribe, Susan Innes, was inspired by that fantasy of the sexy Muse I didn’t get. How can you doubt that when Susan, the heroine in both my novels, In The Flesh and Blindsided, is a Scribe just like all novelists are. She’s home to a very dangerous, and sexy, demon who could be a desperately needed ally. The one thing he isn’t, however, is safe.

Most people have some fantasy about yielding to dangerous seduction. What if we did yield? What if we could survive that yielding? What would be our reward? What would we discover about ourselves? I’m convinced the writers of the very best novels I’ve read are the ones who take that plunge and allow themselves to be seduced by the unsafe places in the imagination, in the human psyche. What comes from allowing that dangerous seduction can be a wild and exhilarating journey. It can equally be our worst nightmare. The demon within, the muse, the inner voice can guide us, seduce us, even destroy us, and the risk we take when we yield and listen doesn’t come without a price. And for Susan, the question very quickly becomes is she willing to take that risk and pay that price. 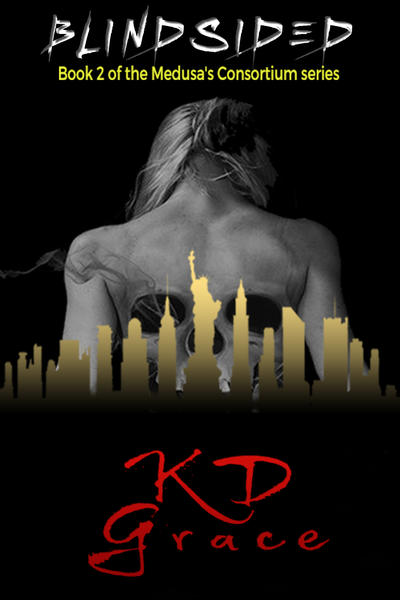 In New York City, away from those she loves, living with the enigmatic vampire, Desiree Fielding, Susan Innes struggles to come to terms with life as a vampire whose body serves as the prison for a deadly demon.

When Reese Chambers arrives unexpectedly from England, desperate for her help, she discovers that Alonso Darlington, his lover and her maker, has been taken captive and Reese has been warned to tell no one but her. Before the two can make a plan, Susan receives her own message from a man calling himself just Cyrus. He not only holds her maker prisoner, but also her lover, the angel Michael. If she wishes to see either of them alive, she’ll come to him and not tell Magda Gardener, the woman they all work for and fear.

With no help coming from Magda or her Consortium, Susan and Reese must turn to the Guardian – the terrifying demon now imprisoned in her body. He alone can help them, but how can she possibly trust him after all he’s done?

It was a dark place where she found him, with walls so high only a small patch of starlight was visible above, but she was a vampire now. She didn’t need the light, and he, well he had never needed the light, had he? He stood naked with his back to her. He was broad of shoulder. There were white scars like latticework across muscles stretched taut over his shoulder blades. At first she thought they were from a whip, but as she drew nearer, she saw that they were more geometric in form, as though perhaps they were some sort of ancient ceremonial writing. She traced the shapes of them with the tips of her fingers, and his muscles rippled with the sensation. With a start she realized she’d never seen his body before.

“That is because I have none,” came his reply. “Only in dreams can I wear the flesh of my choosing.”

“You’ve worn flesh often enough. I would have thought it was always of your choosing,” she said, making no effort to hide her bitterness.

“It was not my own, though. That pleasure, I have never known.”

“Only in dreams, you say. Then this is a dream.”

“You know that it is.” He didn’t turn to face her but leaned toward her, and she slipped her arms around him and rested her head on the flat of his back. His belly tensed at the touch of her hands, and he caught his breath in a soft moan. “Touch is what I longed for most,” he said. “I thought the lack of it would drive me insane while I languished in my previous prison. But here, with you, I’m closer to touch than I would have thought possible. I do not mind it, you know. It is no hardship to be nestled inside you, close to your heart.”

She released him and took in their surroundings once more. “This is the place I’ve created for you?”

He pulled her arms back around him and sighed with contentment as she laid her head against him once more. “This is how I have decorated. The place you created for me was only the shape of myself, both boundless and infinitesimal. Oh, it did not matter. I could see through your eyes, feel through your flesh, even though it no longer lived as it once did, even though you never spoke to me. I hoped that someday you would.”

“And when I refuse, you come uninvited into my dreams?”

“All dreams are uninvited, Susan, and perhaps this time it is you who have come uninvited into my dream.” 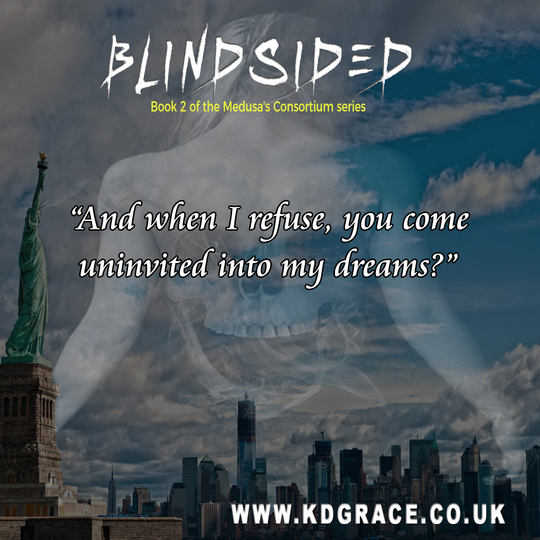 When she’s not writing, K D is veg gardening or walking. Her creativity is directly proportional to how quickly she wears out a pair of walking boots. She loves mythology, which inspires many of her stories. She enjoys time in the gym, where she’s having a mad affair with a pair of kettle bells. Her first love is writing, but she loves reading and watching birds. She adores anything that gets her outdoors.

Thanks for having me over, Lisabet. Always a pleasure to stop by and chat.