[Steampunk! One of my favorite genres! And Stephanie's got a great giveaway at the end of the post, too. ~ Lisabet] 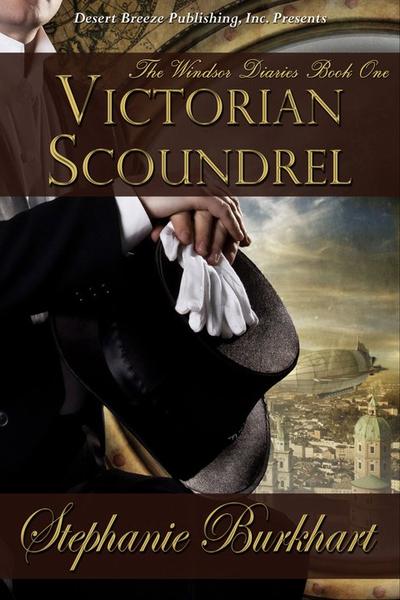 It's 2011 and compressed natural gas has taken over from the coal producing steam machines of the Victorian Age. Alice Windsor, Princess of York, follows her mischief-making cousin, Edmund of Wales, back to 1851 where Prince Albert is hosting Britain's Great Exhibition.

Alice soon finds herself over her head in trouble. Edmund is determined to help Prince Albert build a dirigible and the prime minister appears intent in preventing her from stopping Edmund. Alice knows it's too early for the massive flying machine to take to the air. Complicating matters is the passionate Grayson Kentfield, Earl of Swinton. Alice can't stop her pulse from pounding when she's near him.

Can Alice give her heart to a man from the past while working to stop Edmund from changing history?

Grayson escorted her to a door on the right, threw it open, and put his hand on her waist, guiding her inside. A gas lamp burned on a nearby table, throwing stark, deep shadows into the room.

Her determined man shut the door and pinned her against it. He plucked her glasses from her face and threw them onto the table with the gas lamp. Then he pinned her against the door, placing his hands on the door next to her arms. His breathing was erratic. The light from the lamp cast dark shadows over his chiseled features.

He stepped closer and lowered his hands, placing one on her waist. Heat spiked within her and settled low in her abdomen. His hazel eyes burned with desire. He drew in a deep breath and raised his forefinger, tracing her lips. Alice closed her eyes, but only briefly, savoring the gentle touch of his finger.

"You do wild things to my heart, sweet Alice," he finally whispered. His finger traced her cheeks, then her jaw.

She grew hot, yearning for more. Her senses spun from his sensual touch. She could hardly breathe. "Me?"

"You make it beat hard -- fast." He ran his finger down the side of her neck and traced the 'v' in her throat.

Alice met the raging inferno in his eyes and nipped at her lower lip with her teeth. "Is that all I do?"

He issued a low, deep groan from his throat and leaned forward. 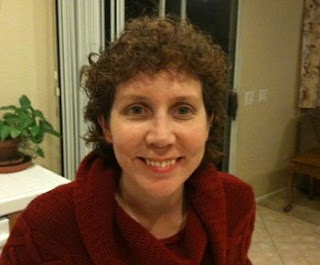 Stephanie Burkhart is a 911 dispatcher for LAPD. She was born and raised in Manchester, New Hampshire. After serving 11 years in the US Army she currently calls Castaic, California her home. Stephanie was married in Denmark in 1991 and has two young sons. She adores chocolate, is addicted to coffee and enjoys early morning walks. She's also an assistant den leader for her son's Cub Scout den and is a Boy Scout mom. She writes paranormal, contemporary, and steampunk romance and has two children's books published with 4RV Publishing.

Find Stephanie on the web

Stephanie is giving away a $10 bookstore gift certificate. Use the Rafflecopter below to enter!
Enter at every stop, for more chances to win!

Steampunk, time travel and a hot hero. What more could a girl want? xx

Like the sound of this book....and guess what? I have it in my Kindle TBR list. Gotta do something about that soon...bring it up to the top. Thanks for the giveaway too.

Thanks so much for having me here today. Here's a link to the Victorian Scoundrel book trailer for you to enjoy! https://www.youtube.com/watch?v=7IUYj2d7ZeY

Karen, great to hear it's in your TBR list!

As I said in my intro, I love steampunk. Have to put this on my TBR list.

I liked the excerpt, and I'm looking forward to reading this story.

Thanks for the chance!

I always loved that old TV show, Wild, Wild West. Steampunk before its time. What a fun genre! Thanks for sharing a hot excerpt...except now I want more!

A genre I enjoy too.

Sounds like a really fun read. And somewhat frightening, I can't imagine how I'd handle going back in time and everything you'd have to do without. Do they even have toilet paper back then?

What is the hardest part of writing a book for you? What's your favorite genre?

Thanks for the excerpt, sounds great!

Gotta get the book, I LURVE the excerpt! Is Alice going to have more tales?