There is just something about a bad boy.

It’s the reason for poems about highwaymen, books about pirates, movies about hitmen and spies and assassins. The scoundrel with the heart of gold has always captured our imaginations. There’s a list of famous villains a mile long, from popular culture and from history.

I do love an outlaw. A gentleman bandit, ruthless and charming.

I grew up reading my grandpa’s Louis L’amour novels, and today I have an extensive collection of my own, only partially “borrowed” from Grandpa’s bookshelves.

LouisL’amour’s stories tell of a West where there wasn’t “good” and “bad”, but simply people, doing what was right for them. His West was filled with strong men and women, living in a mostly lawless land, and guided only by their own sense of right and wrong as they struggled to survive. His characters might have rustled a few cattle, or otherwise dabbled on the wrong side of the law, but they had a strong moralcompass.

The man who robbed the town bank might be the same man who fought for a woman’s honour, or left food for a family that needed it. Some of the West’s most celebrated lawmen had checkered histories, but in the frontier a man was judged by his actions, not his past.

Rose isn’t as straightforward in her thievery as Tucker and his band of rapscallions, but that doesn’t mean that her intentions were any more honourable. She’s using her strengths – smarts and sexuality – to get what she wants, and she’s not afraid to have a little fun along the way.

When these two lawbreakers get together, sparks fly in every direction.

Check out the excerpt below, and leave a comment (with your email address) telling me who your favorite lovable rogue is! You can probably guess who mine is. ;-) I’ll chose one commenter at random to win a .pdf copy of Outlaw Rose. 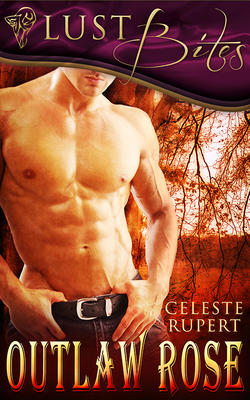 A branch cracked. Rose crouched down in the shadow of a nearby bush and hoped her dark dress and the overcast night would be enough to hide her from view. The footsteps grew nearer and she held her breath. Her heart pounded so loud in her ears that she was afraid it would lead him straight to her. She tried to calm down.

It was quiet. She strained her ears for any sign he was coming closer. The silence pressed in on her as she squinted through the darkness, searching for movement. There was nothing but the faint rustle of nearby leaves in the night breeze. She breathed out a sigh.

She sensed the movement a split second before she felt the hand close over her arm. She fought with all her strength, jerking backwards to try to break his grip, until the loud, metallic click of a hammer being drawn back echoed through the night. She froze.

"That’s better." His voice was a low growl and she felt the steel barrel of his pistol against her cheek. He lifted her to her toes, bringing his face down close to hers. She could smell the coffee on his breath, then his face was close enough to see clearly. His strong jaw and full lips had been hidden by the mask the day before, but she remembered his eyes, which registered surprise as he recognised her. "You! You’re that little snip of a bank teller." He pressed the gun harder into the soft skin of her face. "What the hell are you doing sneaking around our camp?"

"The posse took off to the south, thinking you’d head for Mexico. I…" She hesitated, until the pistol jerked again. "I took a chance."

"Stupid of you. I can’t let you go now, or you’ll just run to the sheriff." He twisted, and she realised he was looking around him. "I don’t like killing women, but you’ve put me in a bad spot."

"No!" Her heart pounded in her ears.

"No?" He leaned over her menacingly. "Do you have another suggestion? We’ve made plans for that gold, and I don’t plan to let some pretty little bank teller get me hanged before I get around to spending it."

"If you’ll let me live…" Her voice trailed off.

He gave her a shake, bouncing her off his broad chest, his hand like steel on her arm.

"I’ll make it worth your while."

He froze and she collided with him again. "What?" he said.

She relaxed against him, trailing a trembling hand across his chest. She heard him suck in his breath, then jumped when his hand covered hers, holding it still.

Celeste Rupert lives and writes in the shadow of the Rocky Mountains. Her fascination with the Old West results in stories set in the rough and tumble world of the frontier, full of cowboys and outlaws and women who know exactly what they want and aren’t afraid to go get it.

Welcome to Beyond Romance, and congratulations on Outlaw Rose.

I'm actually more intrigued by your bad girl heroine (though I don't deny the appeal of the rogue). It's pretty rare to have a romance heroine who's as bad as the hero!

Sounds like a great story, Celeste. Good luck with your release.
I'm with Lisabet. Fun to read about a bad girl! I love "bad guys" too. Desperately.

My favorite rogue has to be Rhett Butler.
normandiealleman (at) yahoo (dot) com

Great excerpt, Celeste. Bad boys and naughty girls, what more could you ask for. Sounds like a great read.

Congratulations on your new release.

Thanks so much for having me Lisabet - and for all your help!!

Rose was a lot of fun to write ... so much so, that I think she might need another story!

I love when the heroine has a little bad in her. Women are encouraged to be 'good girls' way too much. We need to let our naughty side come out to play. Nice excerpt and yummy picture from Firefly. *sigh* I miss that show. Lots of bad girls and guys.

Ooooh sounds good! Love bad boys... Need to add more bad girls to my reading... thanks for sharing the excerpt for Outlaw Rose and congrats on its release! :) Fav rogue... so many great ones out there... I am kinda leaning towards Roarke from NR's In Death series.
greenshamrock AT cox DOT net

I'm actually a very recent Firefly convert - my little bro and I watched the whole series in about 2 days a couple weeks ago. We are retroactively mad that it was cancelled 10 years ago. ;-)

I haven't read the In Death books, but I sure do hear a lot of good things about it. Might have to give it try!
Thanks for playing!

Congratulations on the debut release Celeste. There is something about a bad boy that draws us in. Looking forward to reading more about Rose especially after that excerpt.