Evolution of a Sadist

Take Me Break Me came about partly because I’d read quite a few capture fantasies where the man, or men, seemed to be there mostly to act as ways for the woman’s sexual fantasies to happen. So they were predators, ruthless, and very dominant, but I didn’t really feel like I could like them as people. I wouldn’t want them as my partner. 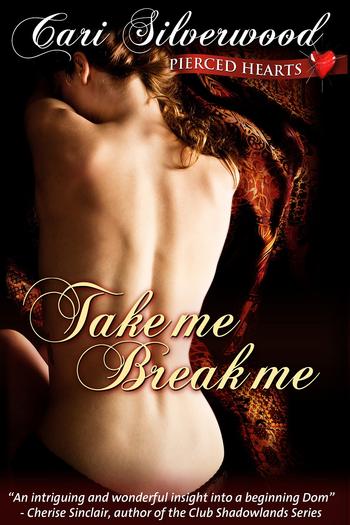 I wanted to see if I could write a modern-day story where the man starts out as a good guy, and yet he forces the woman to do things she might not consent to if given a full choice. Because I wanted to understand him, I ended up writing more than half of it in his point of view. I wasn’t sure I could pull this off, but I think I may have gone close. Klaus, to me, is not a monster. He’s a man discovering his true self in a rather abrupt and forced way.

I think this story could be sub-titled, Evolution of a Sadist. Klaus is a sadist as well as dominant. I toyed with putting that on the cover.

Originally, I planned to have multiple endings, as I could see them when I began writing. But, as I developed the character of Klaus, I came to love him so much, to understand him, that I ended up with only the option I chose and wrote. I had darker ideas, but he just no longer fitted them.

This story is set on Magnetic Island, off the coast of Australia. The town on the mainland, that they travel to, is called Townsville, but it’s such a boring name (sorry Townsville!) that I deliberately did not use it. By the way, it’s named after the explorer who discovered the area – Robert Towns. I also did not bother to get too precise about the setting as I would rather it be a little off center and surreal. I don’t want it to match reality.

The bamboo cane that Klaus uses is not really recommended for caning as it can split. However, some people do use it. Possibly green bamboo is safer, and that’s what Klaus uses. Dry bamboo, if it splits, can cause skin lacerations.

Though I planned this to be a story that skirts dubious consent, so far I’ve been surprised at how romantic readers find it. I guess I’m not that hardcore. I find it difficult to write a story where the man is truly unsympathetic to the reader and unappealing to me – even though I do read those types of stories.

The ending was actually difficult for me to get right. I thought it would be the easiest part but once I got there I couldn’t see how to do it. Many of my beta readers told me it was too short, and I knew they were right, but it still took several tries to be satisfied with it. At first it was too short, then it was too ‘vanilla’. I mean this was a story about a sadistic Dom and yet the ending I first had was merely kissing. I added several thousand words before I was happy with how Klaus and Jodie ended up.

Top drop, as detailed in the story, does seem to happen, and I’m not surprised that I does, yet experienced Doms may not have heard of it. Google it to find some references to the problem.

When I began this story, I put an excerpt on Facebook and I was astounded at how much it appealed to women. When my beta readers read the book that was the part several of them picked as ‘perfect’. Somehow I managed to pick exactly the right excerpt. If you’re curious, when you read the book, it’s the part where Klaus first uses the spider gag. And here is the link on facebook to that excerpt - http://www.facebook.com/cari.silverwood/posts/406428382765329

The blurb has changed since then.

Jodie is scraping the barrel trying to stay afloat. An idea arrives that could rescue her finances and bring her together in a kinky way with a man she never gave up on. She's terrified and fascinated, and tempted as hell.

Capture fantasies rule her eBook. Re-enacting one in a documentary would surely be irresistible viewing to millions of women?

But Jodie and Klaus discover that inside an ordinary man dark desires may lurk. What will win in the end? The man and lover, or the monster?

Last of all, the cover. Lol

Pure agreeable statement, but she rocked back slightly before she nodded.

“Nice is bad, Jodie? You want mind fuck. You want mean. You want things you dream about. You have no idea.”

“Starting now. The rules are gone. I make my own rules.”

I took down the list from the door and held it, slowly tapping the laminated paper against my leg. “No. They were not.”

After unfolding the flaps of the cardboard box, I tucked the list down inside and pulled out the two gags. “Rule one. You don’t talk unless I say you can.” As her mouth opened, with the buckles trapped in my fingers, I dropped both gags into view, and dangled them. “Talk and I use these.”

Like magic, her mouth clicked shut. Now I had her attention. That had worked. I was perhaps as stunned as she looked. She touched her tongue tip to her upper lip as I stood before her, and kept her gaze swinging from the gags to my face. I had a feeling I’d never had a woman so rapt in what I said. Addictive. The pulse of excitement had centered at my groin. Nothing I could do about it. I already knew that looking at women in bondage revved my engine. But I’d never done more than look at pictures.

I ran through my epiphany, convincing myself as much as her. Bluntness was called for.

“My conclusions. You asked me to do this because you still want me in your bed. You want me to fuck you.” Her gasp, I answered by swinging the ball gag. She uttered no words. “Somewhere in your plans, you hoped. The rules, I made up those in line with what I knew you’d be thinking. You knew I’d not step beyond, or not much.

“This,” I swept my arm across, “This room was your idea. Your rules. Lock me up. Make me yours for a while, but not too rough or dangerous because that isn’t in my rules.” I cocked an eyebrow. “Yes?”

Though she frowned and shook her head I went on. It didn’t matter if she deluded herself.

“You imagined some safe little love affair, with some kink on the side? Doesn’t work that way. Either you hand over control, or I walk. No documentary. Nod if you agree.”

I waited. I could almost hear the clocks ticking.

When she nodded slowly, my heart kicked back in. If it had beaten at all for those last few seconds, I’d been unaware.

“Good. This room is no longer your prison. The house is secure and private enough. You’re coming upstairs as long as you behave. I’ll install more cameras.”

No protests. Good. For a woman who liked having an opinion on everything this was exceptional. I could have walked on a cloud I was so hyper-aware of everything she did. Were her lips fuller, her cheeks flushed, her breathing faster? I thought so, but she didn’t know what I intended.

“Let me point out what could have happened if this stupid plan had gone wrong. If you picked a less restrained, a less sensible man. You’ve given me a hundred filthy dirty ideas about what I could do to you. I never knew what depths my mind could plunge to. Now I do. If anyone was mind fucked so far, it was me. Another man would follow through. You think these gags are bad? This one with the red ball is simple, it just stops you talking.” I laid the other, metal-and-leather gag across my palm. “This one is a spider gag. With this in, you can’t close your mouth and your mouth can be fucked. Do you have any idea of the things on the internet? Wait.” I held up my hand. “I guess you do, from what’s in those books you read.”

I bent and rested my hands on my knees. Mind fuck. This I could accomplish.

“You want a list? How about the list of things a man could do to you in this situation? I could make you wash my dishes naked with a gag in. I could tie you up, cut your clothes off and just stare at you all day – just because I could. I could make you be a piece of furniture and ignore you. Humiliating? Yes. I could train you to be an anal slut. I could fuck your ass all day long. I could collar you and make you crawl around on the floor like a dog at a convenient height for blow jobs. I could share you with the man down the street, stick needles in your nipples and use them and some string to fasten you to eyebolts in the ceiling. Want to try that one? And at the end of it all, if I was the worst sort of man, I could kill you and bury you out there on the beach.” I swung my arm up to point. “Maybe no one would ever find you.”

Now she was truly speechless, maybe even scared. Served her right. I watched the little swallows she made for a count of five.

“But I’m not going to. I’m your friend. Remember that, no matter what I do.” I smiled one-sided but I’m sure it didn’t reach my eyes. The eyes are the mirror to the soul and right then my soul was very dark.

Then I squatted in front of her, a couple of feet away, reached out and ran the tip of my forefinger along her plump bottom lip. “My rules. Open.”

A second’s hesitation at most. She shivered and her mouth parted. Mind fuck, here we come.

“Good. Jodie.” Then I very deliberately held up the spider gag, slipped it between her teeth, pulled her head forward, and held her there while I buckled it. Hair made a great anchor point. I slid my splayed fingers into the roots and tilted her head back then I added a rule.

“Second rule. You do my dishes whenever I say. You wear the spider gag. You don’t speak unless I say. But first…” Eyes locked on hers, I advanced one finger into her mouth and stroked her tongue. And she let me.

Had I hypnotized her? She did nothing but stare back. What I wouldn’t have given to fuck her mouth right then and there.

This sounds like an intriguing book. Personally, I'm fascinated by the inner life of the Dom. You've captured Klaus' dawning awareness beautifully in the excerpt.

It was a lot of fun thinking my way though this book and a great way of stretching my writing skills, Lisabet.

I agree - I think seeing into his dark mind is fascinating. Love the excerpt from his POV and reading about his mounting excitement. Very nice!