Thanks, Lisabet for having me as guest on your blog. It’s good to be included among so many talented contributors.

Sex and the Story

The most interesting thing about the “sexual revolution” of the sixties, at least for me, was the open admission that women naturally liked sex, and that there was no good or bad about it. There had always been pornography for men, but that, we were told, was the nature of the beast—but not his mate. Then, the old taboos began to disappear.


With all this social history in mind, I didn’t worry much about being put down because I included a generous helping of sex in two of my books. What goes on in a bedroom can show the reader a great many things about characters of any gender, and also about the dynamic of a relationship. Because I write historical novels, part of my task is to set the manners and morals of yesterday up for the reader’s inspection, and to demonstrate what the socially approved games of status and power between men and women of the past were actually like. 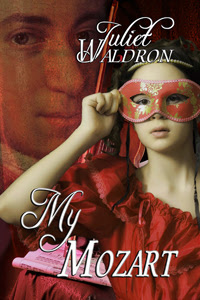 I’ve been a little surprised to discover that a writer can still be rapped on the knuckles for being “bogged down in sex.” I recently received some negative reviews for a book called My Mozart. I don’t write erotica per se, but this novel is the first person narrative of an 18th Century fan-girl, a young musician with a big talent who is in love with an older—and married—artist. I believed (and I still do) that sexual experiences with her idol are central to this story. Certainly, we all remember the first surges of passion and the wet fantasies which went with them. In My Mozart, an orphaned heroine, growing up in the fast, loose 18th Century theatrical scene and musical to the bone, is utterly susceptible to the man who has been for years her teacher and mentor.

"Mozart, Ich liebe dich. I love you. Love you."


"Come here, Nanina Nightingale. Come and give your poor old Maestro some of your ‘specially sugary sugar."


My mouth on his - the friction produced warmth and sweetness, with a decided undertone of the expensive brandy he liked, flowing from his tongue to mine. I slid my arms across the brocade of his jacket, none too clean these days, and swayed a slender dancer's body against him.


Let me assure you that my sophistication was assumed. It really doesn't matter, then, or now. I was young, foolish, and drowning in love. I was seventeen. He was thirty five… I believed he knew everything, that he could see right through me with those bright blue eyes. He probably could. He'd been my music master--and, more--my deity, ever since I'd met him, in my ninth year.


His jacket, now spotted and stained, must have been fine enough to wear in the presence of the Emperor. Bright blue, it perfectly matched his eyes. I can still feel the fabric sliding under my fingers as my arms passed over his shoulders and around his neck. I can still see him a woolly frizz of blonde hair, long, aquiline nose--a ram that had once been an angel. Sometimes, when he was loving me in some exquisitely naughty way and joyfully smiling while he did it, I could almost see horns.


So you will understand exactly how I loved him, so that you will know that it was a real passion, I'll tell you that I adored the feel of him, the smell of him, the taste of him. They've tried to turn him into a tinkling porcelain angel, but I'm here to tell you, here and now--he was not.


Mozart's eyes were big, slightly protuberant, and as I’ve said, so blue. Alarming, those eyes! Once they'd shone with the pure light of genius, radiant and blissful as a summer sun. Nowadays, they were simply wasted. My adored Maestro was mostly either drunk or hung over.


He'd fallen from grace. Everyone knew it. Creditors hounded him. There were too many wild parties, not enough money. His wife had given up coping, had gone back to the Baden spa where she had an on-going romance with a big, handsome Major. And who could blame her? Pretty Constance, in the last ungainly stages of yet another pregnancy, fleeing Vienna after a winter of freezing and begging for handouts...


Even a seventeen year old idolater could recognize her defection for self preservation. I didn't judge her. I didn't judge myself. I was simply glad to have her out of the way. When she was gone, he was restless, at loose ends, spending most of his time hanging around our theater. Of course, nothing could have suited me better…

As I immersed in Nanina’s story, she started to wake me up at night. She told me how it was for her, this brief, searing experience of love. Even the death of Mozart could not bring about the death of her passion. Her sexual memories were hoarded, treasured, exactly like any modern fan-girl’s memories of a single night spent with a rock star idol. Moreover, those memories would be physical—each passage of the hand, taste of tongue and flesh, each kiss—etched into the mind, ecstasy preserved for endless re-runs. Not to tell the story as Nanina told it, to pretend that the last fifty years of freedom to talk about sex--about what it means to us, about what it does to us, about how it lifts us up and casts us down—wouldn’t be true, either for this character or for me.

Get your own copy of My Mozart!

Email ThisBlogThis!Share to TwitterShare to FacebookShare to Pinterest
Labels: guest blogger, Juliet Waldron, My Mozart, sex and the story

This excerpt is so thoroughly convincing! I can definitely imagine falling in love with a genius like Mozart, even when his shine had faded. Wonderful notion for a novel.

Sounds like great read. Thank you for sharing the excerpt.

A marvelous book, as is "My Mozart"...and a host of other books by this talented author.