It was all politics. The Labyrinth, the terror, the Minotaur. Minos, King of Crete, needed to maintain order in his ancient realm; revolution was always lurking in the shadows. Pasiphae, his oft neglected wife provides him with the perfect vehicle, a half bull/half man monster, supposedly the offspring of her illicit affair with a sacred bull. It doesn’t matter if the beast is gentle and sensitive, call him vicious, have your minions paint him as a fiend capable of devouring any man, woman or child. 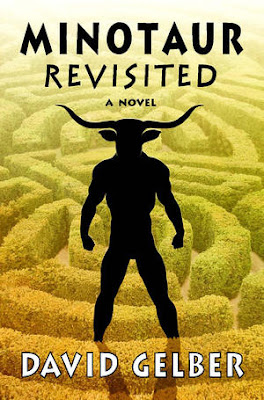 And, a myth is born. The monstrous Minotaur. The terror of the ancient world. Fact? Fiction? In my latest book, “Minotaur Revisited” the reader learns that the Minotaur truly lived, but the stories surrounding him are mere propaganda, a product of politics. He is truly a sensitive soul who has been locked away in the Labyrinth. Is there any hope for this poor monster? Enter “noble” Theseus, another product of political misinformation. Sent to slay the vicious Minotaur, a drunken Theseus passes out at the Minotaur’s feet. While our pacifist hero debates what to do with his would be assassin Theseus offers a deal. Theseus tells the world he has slain the terrible monster while the Minotaur slips away.

For thousands of years our hero lives in the background, shaping history from the shadows. Learn the truth about Moses and Pharoah, find out who pushed the stone away from Jesus’ tomb or why vampires live forever. All this and more is revealed by the Minotaur himself, in his own words.

Martin Luther, Jack the Ripper, the Holocaust and so much more are part of the Minotaur’s immortal life. This Minotaur lives a life as god, king, sage, mother, father, husband, midwife and so much more. And, in the end, the reader will stop and think about this world we live in, about humanity, the good and the bad, while considering who are the real monsters.

The Minotaur proves himself to be the true mover and shaker of history. Read of his exploits and, when finished, stop and think about what it is that makes any being good and noble and true. More than likely readers of “Minotaur Revisited” will stop and shake their head, perhaps look at history and question what is truly important.

Legend states that the Minotaur was confined to the Labyrinth, slain by Theseus and then laid to rest by thousands of years of Greek mythology. But, the truth is far different. Read the Minotaur’s own words as he recounts his full life as god, king, warrior, matchmaker, midwife, monk, sage, father, mother, husband and, most of all, witness. The fierce Minotaur lived to see and be a part of the best and worst of humanity during a life spanning thousands of years. Part bull, part human, the Minotaur struggled to find his place in this world and, in the end, left his unique mark on history.