Here’s a confession which will come as little surprise to anyone who knows me in real life. When it comes to romance, I can be very cynical.

Much as I enjoy stories where people fall in love, I grew up reading the bodice-rippers of the seventies and eighties. Those have their place, and they certainly paved the way for romances where the action didn’t stop at the bedroom door. But I read about so many alpha males and gorgeous virgin heroines that I grew very tired of them.

Now, even though I know romances have moved on and are much more varied, my personal fiction filter is still a bit overactive when it comes to this genre. Plus, since romances are published in a much greater quantity than other novels, there are more books to check out, and statistically speaking, there are likely to be more books that don’t work for a particular reader (though they may well be the favorites of another).

That being said, I write love stories and there are romance subplots in all but one of my fantasy manuscripts as well. My favorite novel is Gone with the Wind. So what’s the trick in appealing to a cynic?

Start with the characters

In every genre there are plots which might be overused, and romance is no exception. But if I care about the characters, I’m much less likely to think, “Not another marriage of convenience!” If the characters feel real – if they’re funny, flawed, admirable people who are far more than just pretty faces or large body parts – it’s easier to be drawn into the story.

If the characters have problems that we can understand and sympathize with, we’re hooked. That applies to every genre, but in romance it might include not having any deliberate or contrived miscommunications (also known as the Big Misunderstanding). The conflict keeping the hero and heroine apart should be a real problem, rather than something which could be resolved if the two of them spoke honestly for ten seconds.

As someone once put it, suspension of disbelief doesn’t mean hanging it by the neck until it’s dead.

Give it a twist

It shouldn’t be easy to see how our heroes and heroines will overcome their obstacles. We cynics tend to overthink matters, but it’s all the more satisfying when we can’t quite do so, but the characters manage to solve the issue.

Pamela Morsi’s historical romance The Love Charm has a great example of this. The hero’s best friend is deeply in love with a woman whose husband deserted her, but the parish priest refuses to marry the two of them until there is evidence that the woman’s husband is dead. Otherwise, of course, she will be in a bigamous marriage.

The hero searches for that evidence, but finds nothing. How he nevertheless talks the priest into performing the marriage is a delight to read.

Even cynics fall in love. And when we do, we fall hard. 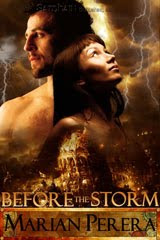 Several of my characters tend to be on the cynical side as well – such as Alex, the heroine of my just-released debut novel, a romantic fantasy called Before the Storm. The story begins when her owner gives her as a gift to his greatest rival, Robert Demeresna. Robert isn’t too pleased about this generous gift and keeps his sorcerer in the same room when he unwraps it:

“Take your cloak off,” Robert Demeresna said. “Mayerd…help her with it.”

Alex unfastened the cloak and let it drop, wondering if the sorcerer would flip it through the air with magic. Instead, he was at her side as the velvet slipped off her shoulders, and he caught it before it hit the floor.

He moves too fast and too silently for a man of learning, was her last thought before the air struck her skin, chilling it. She let her mind go blank and her body doll-like, waiting for further instructions. The baron seemed to prefer it that way.

He cleared his throat. “Take it off.”

“Of course, my lord,” Alex said. The sorcerer backed away, running his hands over her cloak in a caressing way that would have disgusted her if she had been able to feel anything at that point. She unfastened the black sheer and let it puddle at her feet.

There was something strange about his terse orders, and the unfamiliarity penetrated even her gelid calm. She obeyed, watching as Mayerd dropped the cloak on the hearth and picked up her shoes. He examined them before he gave his attention to the black sheer, shaking it out, turning it this way and that. He looks like he’s going to try it on for size, she thought and killed a spurt of half-hysterical laughter. She didn’t know which man would be worse when angered.

“I beg my lord’s pardon.” What in the world did he expect the Black Mare to wear—armor? She looked at her bare feet, noticed the sheen of sweat that gleamed on her breasts, and wished she wasn’t standing so close to the fire.

The baron took a step closer and Alex glanced up, startled at his nearness. He was not very tall, but he was large, and her skin crawled as she noticed the width of his shoulders. This was a man strong enough to hurt her with his bare hands, and she supposed he would start soon. She concentrated on floating, allowing years of training to take over while her mind drifted.

“I see you wear no jewels.”

“No, my lord.” Valuables or money of her own would have been far too liberating.

“You don’t need them.” The baron’s tone was quieter. “Take your hair down.”

She raised her arms slowly, letting her breasts move with them, and kept her gaze fixed on the baron’s face as she did so. His body was tense, as if waiting to pounce, but his expression was not so much lustful as wary. She didn’t understand that, but what did it matter at this point?

Bio: Marian Perera was born in Sri Lanka, grew up in the Middle East, studied in the United States and lives in Canada – for now. She’s in her final year of college, studying medical laboratory technology when she isn’t writing. Her first novel, Before the Storm, features steam engines, sex and sorcery… and was a surprise to everyone who knew her as a studious Asian girl who wore collared shirts and cardigans.

She blogs about writing, publication and every step between the two at Flights of Fantasy.

Email ThisBlogThis!Share to TwitterShare to FacebookShare to Pinterest
Labels: Before the Storm, Flights of Fantasy, Marian Perera

Welcome to Beyond Romance! I really like your excerpt - there's so much going on in your heroine's head!

Thanks very much for your welcome and for hosting me, Lisabet!

I wanted an excerpt which would show the anticipation that's so important in romance. :) And, of course, Alex is as cynical as they get. It was fun writing from her perspective.

Good excerpt. If this is the first chapter, I'm hooked. I always like it when an author manages to either steer clear of cliches and stereotypes or is so good that I don't notice them. I think you managed that.