When Vampires Were Scary

I'd pleased to welcome Donna Burgess to Beyond Romance. She'll be giving away two copies of her book, Darklands, to some lucky reader who comments today! ~ Lisabet

I want to thank Lisabet for having me as a guest today. I’m probably giving away my age, but I remember when vampires were scary. I’m not sure what exactly happened or when it happened, but somewhere over the course of the last decade or so, vampires guys became dreamy hunks who never need little blue pills and vampire chicks became these temptresses in great leather outfits, flowing hair and incredible alabaster skin.

I sort of miss the good old days. Why? Because the vampires I just described grace the covers of 99% of the “horror/paranormal/fantasy” paperbacks down at my local Books-A-Million right now. The gatekeepers in the world of big-time publishing are satisfied with rehashing the same stories again and again because they want to believe the readers have become trained to look for the formula again and again.

I did not set out to be an “indie” author when I wrote Darklands. I had this naïve idea that something different might just be what it took to break into publishing. Wrong! But as they say, things do happen for a reason. I’ve learned a lot about writing, and more importantly, I’ve learned the gatekeepers aren’t always right. In fact, they seem to be a tad out-of-touch with what the book-buying public wants these days. Just take a look at Amanda Hocking or any number of indie authors who are outselling their traditionally-published peers, lately.

Anyway, I didn’t guest here to rant about the state of traditional publishing, but to promote my tale of vampires. We’ve all heard the old saying, “You always hurt the ones you love” (but not always in a good way ;-D). There is a lot of conflict in Darklands. People do get hurt and at the end, not everyone is going to dash off to Neverland. At the heart of the tale is Devin, a vampire who hasn’t been exactly truthful about his past relationship, and Susan a newbie vampire with a chip on her shoulder. Throw Michael, Susan’s normal-guy fiancé, and a crazy Nazi vampire hunter named Kasper, into the mix and things begin to get a little messed-up. I’ve tried to create something a bit different with this novel (and the entire Darklands series). If you like some scares and a dash of steamy sex with your blood drinkers, please check out the sample from Amazon. You may find something you like. 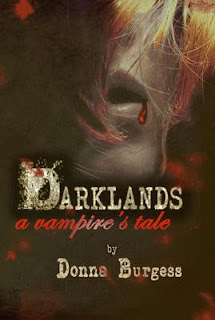 Halloween night, twenty years ago, college student Susan Archer watched as her beloved twin brother was brutally murdered at the hands of a stranger she invited into their home. Still haunted by the guilt of that night, Susan is now a tough but bitter cop in a nowhere town, trying as best she can to lead a normal life. When she is nearly killed during a wild shoot-out, she realizes she is not as strong as she first thought. Fearing a breakdown, she flees the confines of her safe boyfriend and familiar surroundings to find salvation in the arms of “Deathwalker” Devin McCree—the very man who killed her brother. But things aren’t always what they seem and she quickly realizes Devin was not the monster she originally thought, but a kind of guardian angel instead. On the run from a crazed Nazi vampire-hunter named Kasper, she and Devin must find a way to endure the dreary urban landscape of a dying metropolis and escape Kasper’s wrath. Darklands: A Vampire’s Tale is a sexy and violent tale of survival, bloodlust and two people grasping to the edge of immortality while trying to hang on the last shreds of their humanity, the first volume in the Darklands Vampire series. 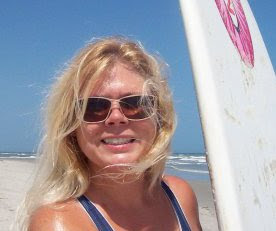 Donna Burgess is an author of dark fiction and poetry who enjoys surfing, painting and has a deep affection for all things Monty Python and low-budget horror flicks. Over the past fifteen years, her fiction and poetry has appeared in genre publications such as Weird Tales, Dark Wisdom, Sybil’s Garage and others. She has been married for twenty years and has two children. Her newest releases include Darklands: a vampire’s tale (the first book in the Darklands Vampires series) and Breaths in Winter, a short story collection. Both are available in print and e-book. When she is not conjuring, she can be found surfing.

Greetings, Donna! Welcome to Beyond Romance. I wish you lots of luck with your Darklands series - and with your blog tour.

I have to say I do appreciate my vampires being very scary. I think some are too 'pretty' nowadays. That's showing my age I think.

After reading your post, I was forced to sit down and ask myself, "What was the last scary vampire book did I read?" I can't answer that question!

Darklands sounds good and I'm adding it to my "must have now" list!

"I remember when vampires were scary"

I think you pretty much guaranteed me picking up Darklands with that one comment, Donna. I not only remember when vampires were scary, but I absolutely 100% prefer them that way. It seems as if the more popular they are, the more sanitized they've become.

The last truly scary vampire saga I can remember is the Necroscope series by Brian Lumley.

Hello, Donna! I just sent you a friend request in Facebook. "Darklands: A Vampire’s Tale" appeals to me greatly. I have a button that says BITE THE ONE YOU LOVE. lol!
I was in the Shetlands in Sept. and Michael Palin was staying at our hotel. I like Monty Python too. Nice meeting you here in Lisabet's blog. :-)=

Thanks for your post today, Donna. I haven't been a very big fan of the vampire genre, but reading about some 'scary' ones may be the difference I was looking for. I look forward to checking out your book.

Hello, Donna! Congratulations on "Darklands"! You are a new author to me, and I enjoyed visiting your website to learn more about you and your writing! Yes, I really, really do remember when Vamps were scary--I'm still scared! "Bram Stoker's Dracula" is the Grand Vamp of them all. "Near Dark" is one of my favorite movies. The original TV version of "Salem's Lot" scared the stuffing out of me--and I never did get all the stuffing back in place ; ) "Darklands" sounds perfectly creepy!

Sounds like it is going to be a great series. It has been a pretty long time since I have read a book about vamps that has been scary... Thanks for introducing your new series to us and Congrats on its release!

Hello Donna,
I like scary and non-scary vampire fiction. Lately there hasn't been any scary vampires to read about. Dracula and Salem's Lot were my first and scariest vampire books.
Good luck with your books and keep writing, so I can keep reading.
Susan in KY esbaugh@bellsouth.net

Thanks again to Lisabet for having me today and to Roxanne for setting up my blog tour. This has been so much fun so far! Especially reading all the wonderful and encouraging comments! You guys have made my evening. Maybe writing scary vamps was a good decision, after all!

Cheers and have a great evening.

I've become so fed up with the "sexy, sparkly vampire" that I've boycotted vamps all together. But your book might change my mind. I cannot STAND reading about vamps/weres/zombies on most occasions (being that it has been done to DEATH--no pun intended) It pains my heart as a horrorphile to see my beloved paranormals turn into tired, unoriginal cliches.

Hello and thanks to you all for visiting!

Our winners are SALLY SAPPHIRE and VEGETARIAN CANNIBAL.

Sally, could you please post or email your email addy to me at lisabet
at
lisabetsarai.com?

Thanks guys! Can't wait to read it!

Lisabet/Donna - thanks SOOO much for this!