Year of the Cat

Wait a minute, you're thinking. Did Blogger screw up and repost something from five weeks ago? Has Lisabet finally lost it?

I can't completely vouch for my sanity. (Who can?) However, I'm not as confused as I might seem. You see, today (February 3rd) is Chinese New Year, the most important holiday in the year for billions of individuals of Chinese descent as well as people from Han-influenced cultures such as Vietnamese, Korean and Japanese. 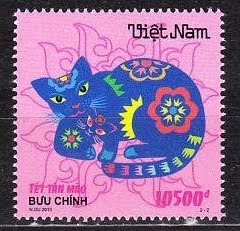 I've read various explanations of the discrepancy. One theory I encountered was that this was due to a linguistic confusion, because the Chinese word for rabbit was similar to the Vietnamese word for cat. Someone else suggested that since there was already a rodent year (the Rat), the Vietnamese didn't want another one. I'm not sure that this is very convincing since last year, according to the Chinese Zodiac, was the Year of the Tiger, another feline. On the other hand, one can never have too many cats, right?

In any case, this whole week is a major festival in the country where I live. Red lanterns adorn the buildings. Chinese calligraphy hangs from the eaves. Food is evident everywhere - both special, festive dishes for humans, which symbolize luck and prosperity, and offerings to spirits and ancestors. The supermarkets and shopping malls even play Chinese music!

We don't really celebrate Chinese New Year ourselves. Sometimes I'll wear red to get in the spirit. I have a red silk, Chinese-style blouse that I bought on holiday a few years ago, though it's a bit fancy to wear to work. Other than that, it's pretty much an ordinary day. Tonight for dinner I'm planning to make hamburgers, mashed potatoes and salad.

And what about our felines? How are they spending the first day of the year of the cat? 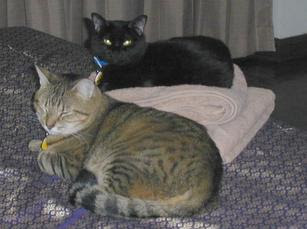 Pretty much as usual - eating, dozing, dropping into my office occasionally to see if they can assist...!

Anyway, Happy New Year to all of you! May the felines be with you.

ANNOUNCEMENT: Thanks to all of you who left me birthday comments here or at Marian Perera's blog. The winner was K.S. Augustin. She gets a free copy of Almost Home. Remember that you still have more than a week to enter my monthly drawing, just by telling me which book of mine you'd like to win. See http://www.lisabetsarai.com/news.html for details.

Posted by Lisabet Sarai at 3:27 AM

Hee hee. My son, The Wast, is a Rabbit but I think I'll have to tell him that our two cats also claim ownership of this year! I know that Fluff is constantly praying to Basement Cat for frickin' laser vision so he can sear the two dogs to a crisp. Squeak just wants opposable digits so he can open the fridge doors himself!

Thanks for the prize, Lisabet. As you know, it will be very much cherished.

Yeah, it's rather a good thing that cats have _some_ limitations. They could definitely do some damage!