Loving kindness. It sounds like something we all want, something that can take any shape tailored to our own deepest yearning. Sometimes I picture loving kindness as a beautiful genie we let out from a bottle.

Imagine coming home after a stressful day to a gorgeous naked man waiting to massage your body. His hands would dig into tense shoulders, his long hair would brush against skin, he’d kiss the side of your face as he listened to a list of things that seemed important as the long day stretched on…only as you share them, as you relax and get in tune with yourself, you can see these worries and thoughts are trivial. They are not the deepest part of yourself—the part your genie can touch with loving kindness.

My first experience with the concept of loving kindness came last year when I began the practice of yoga after I’d suffered a blood clot in one of my legs. I began a new journey that led me to greater awareness of my own body but also an inner journey through meditation into my deepest desires. Believe me, this is helpful when I’m writing an erotic scene because what pops into your head in the middle of calm meditation listening to the sound of waves crashing on a beach while wearing a lavender eye pillow is probably something you’d be too embarrassed to admit you’d ever want.

So one thing that yoga and meditation helped me do was get in touch without judgement with what I find sexy, what my heroines and heroes find sexy. Sometimes at the end of class there is a reason why I’m smiling and it’s not just because I’ve stretched out sleepy muscles!

I have always had a forbidden affair with stories where one of the characters is a master or mistress and the other a submissive or slave. Now, I will qualify that for me, I have a preference for gentler stories where the fantasy is strong and it’s not so harsh that I can’t enjoy it.

I like reading stories where the unexpected character has all the power and secretly holds a seemingly more powerful character in thrall. This is true in a lot of my stories, starting with my first book, The Janitor. Dane Connelly is a rough, tough boxer, but he’s crazy about a shy academic. Dane might sport a black eye from one of his matches, cuts on his face, but when he holds Noel, he is tender, he is loving kindness.

Later this spring I will have some books out that explore some of my favorite themes. Loving Kindness has busy intergalactic cruise director Gwen Thompson trying to keep a lid on her own forbidden feelings for sexy martial arts instructor Kealton James. When pirates take their ship, Gwen is forced to play the role of Kealton’s submissive, but what rocks her is how natural it feels.

“Kneel.” Kealton’s voice was hard, inflexible. Testing Gwen, seeing if she was ready to be his submissive.

Oddly, his confidence in being her master made it easier. Gwen knelt and waited on him. Kealton continued to move around the great room, doing his martial arts routine. When he finished he turned at last and tugged his silken pants down and off, revealing himself to her completely.

Gwen’s breath suspended so all she was aware of was the drum of her heart as she looked at him. She was back to the night when she’d first watched him doing katas in the nude. His blue eyes were almost black under the artificial lighting as he walked to her, his cock hard and unsubtle between his legs.

Kealton loomed over her deliberately, looking at her until she dropped her gaze. Moments passed. She was aware of the rise and fall of her bare breasts with each breath, aware of the moisture slickening her channel and the pain of need at the thought of him touching her there.

“I think some yoga first.”

Gwen’s gaze shot up to meet Kealton’s. His face was flushed, his pupils enlarged, giving his eyes the look of a bird of prey from a menagerie on one of the zoo worlds.

More testing and…something else: the reason he’d taken the time to brew her the special tea. He wanted her relaxed, in the mood.

She moved onto all fours and with an indrawn breath began the movements he’d taught her months ago, jutting out her buttocks, dropping her belly and raising her chin like a stretching cat.

He watched her, expressionless, and with the cool air against her skin, touching her between her legs where she was damp with desire for him, she was aware of how sexual the asana was. How had she never seen this before? But as she curved her spine, head down, back stretching, she could smell her own excitement. Surely if she caught it, he could smell her too.

She closed her eyes, surrendering to the moment, to the breath. She could feel his gaze on her like a hand and then she felt a real caress as he cupped her bare ass approvingly. “This makes your master want to fuck you.”

She wondered if he’d thought that when he’d taught her the position. When he grazed her warm cheek, she knew he had. Somehow he was reading her thoughts as he read her body.

Moving gracefully—was this really her?—she shifted into position, legs bent and soles together, hands cupping her ankles as she bent forward.

He sat down behind her and she felt his cock, hot and wet-tipped, as it inscribed a half-circle against her lower back.

He reached between her legs and cupped her, giving her a gentle squeeze and then leaving his hand there while she continued to stretch and breathe and try to relax. She felt herself naturally enfolding his fingers, making his hand slick.

“Spread your legs, lean back against me.” This wasn’t yoga now, this was a place she’d never gone before, a place where Kealton was her lover, her master. 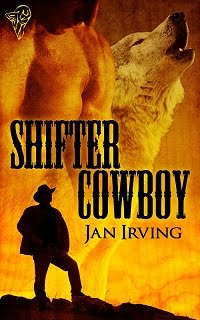 Look for Loving Kindness in mid spring followed by a ménage called A Pastry Princess where two men and their woman explore these themes on a futuristic world.

In the meantime, I have also explored these favorite themes in many of my previous stories such as Jesse and my upcoming TEB novella Shifter Cowboy.

To see more of Jan’s work go to: www.janirvingwrites.com

Welcome to Beyond Romance, and thank you for sharing this sizzling excerpt from Loving Kindness.

Is there really a yoga position called the cat?!

Thank you so much for having me here. As you know, I love your blog.

Yes, although there are variations of the name--cat-cow or just the cat. In yoga practice your instructor may call out: 'all right, on all fours, hands spread wide under your shoulders, it's time for the cat!'

It is known as Bidalasana, which is its formal yogic name. Here is a link showing you this position and also a little demo of what it looks like: http://www.abc-of-yoga.com/yogapractice/cat.asp

Yoga is very good for the body and even if you think you can't do it, there are types of yoga for people healing from illnesses. It raises the spirits and gets you in touch with your body. I also find it can be quite sensual with a partner.

Great post Jan! Thanks for sharing and I can't wait for Loving Kindness to come out! :) Woot!

Wonderful excerpt from Loving Kindness. I can't wait for its release. Jan, as you know, I always enjoy your books but I especially love that you use the things that you enjoy in your real life to make your books come to life.

Nice to see you!

I like reading about how you incorporate your real life experiences into your fiction. It adds a richness and intimacy to the story.

I look forward to this story when it's released.

Loving Kindness excerpt is very sexy. I'll be looking forward to its release. There is something very sensual to relax and let your mind drift whether in yoga class or in a massage.

Ah! I actually do "the cat" as part of my regular stretching exercises! Who knew?

Thanks to all the commenters for dropping by, btw!

Thanks to everyone for your nice comments!

Lisabet, I recognized that one too as something I'd done in regular stretching in high school.

Loving Kindness is in edits now and will hopefully be out at the end of March from Loose Id.