I’ve been listening to that Springsteen song on my iPod lately and when I got Lisabet’s guest blog topic suggestions, well, it just seemed to fit. First, I want to thank my fellow Total-E-Bound author for having me on her blog. It’s a lovely place and I’m thrilled to be here. I’ve got more than a couple of Lisabet’s books on my ereader in the keeper file.

Now back to the topic at hand. She asked me to write about the appeal of the klutz. Honestly, the concept of a character with klutz tendencies is a favorite of mine. Maybe because I see a lot of me in the characters. I love to dance, even learned how to do that fancy Irish step dance, but I’m telling you, I have two left feet. DH likes to tease me that it’s funny I write characters who are sexy and alluring since my attempts at alluring tend to go the way of the movie, “Clueless”. Heroine is trying to look sexy and whip her hair around, instead she rolls smack off the bed. That’s me. I’ve done that. Sad.

I think that’s why I like to write characters who have hearts of gold and the ability to trip when entering a room. That’s me. I used to teach school and my first day walking into a room full of thirteen year olds, yeah, I tripped, grabbed the door frame and tried to keep a smile on my face. Kids laughed, I laughed, and we all realized I’m human.

That’s why a character who trips over their own feet, like Ryan in my book Careless Whisper is so fun. He’s trying like heck to be sophisticated and the persona people see on television. Unfortunately for him, he’s on a Ghost Exploring expedition, and he trips when he sees a family of raccoons. It’s riot because, I know that would be me. I’ve tripped on my own two feet on a level, empty floor. I think it also hold appeal because as the readers, we know the heroine and hero either has to be true to themselves or not be taken at face value. With a heroine, she’s got charm. With a hero, he’s someone who is sexy, but has flaws.

My favorite characters are those who don’t quite fit the social mold—like on overly obvious tattoo of a double male on a gay character, or a female carpenter who loves her weekly manicures, or the vixen with blue hair just because it suits her mood. Why? They are who they are, flaws, nuances, and all, and just shrug. “Take me as I am.”

What kind of character do you like? Are you infatuated with ‘the nerd’? Do ‘geeks’ do it for you? Or are you the type or reader/author who just likes a guy who doesn’t take himself very seriously? I’d love to know. 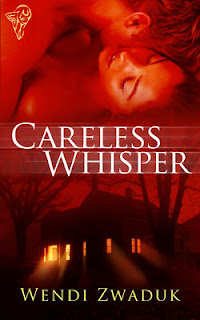 He’s her kinkiest desire, if she’s willing to open her heart and believe in him.

The dead don’t always rest in peace. Some stick around to make the lives of the living hell on Earth. Ryan Black knows the frustration of dealing with the dead. He’s a Ghost Explorer. He’s conquered houses filled with apparitions, abandoned school buildings that house angry vermin, and managed to woo the female population of Snake Falls, Ohio. But he’s about to face his toughest challenge, convincing sceptical Samara Jacobs she not only shares his gift, but holds his heart.

Women fall at Ryan Black’s feet and Samara’s determined not to be one of the many—that is until she’s forced to work with him. He’s certain ghosts exist and willing to prove it. The more she gets to know the man behind the television persona, she decides the handsome klutz who chases things that go bump in the night isn’t so silly after all. But is he worthy of her love?

"Hauntings? Aberrant actions? What you do has nothing to do with demons or spirits—unless you mean the spirit of getting into women’s pants.”

Ryan turned to see Samara standing next to him, her arms folded. Had she listened in on the entirety of his ridiculous diatribe? “I don’t cross dress.” Sitting on the edge of the table, he took in the sight of her. A strange rhythm pounded behind his ribs and his cock pulsed beneath his zipper.

“Har.” She rolled her blue eyes, the type that could snare a man at twenty paces. “No, you bed the women whose houses you clear of spirits. I’ve seen your show and I hear the gossip. Criminey, you should be checked for STD’s.”

“Gossip and innuendo.” Hell, up close she demanded his attention without saying a word to grab it. “And FYI, I’m clean.”

Damn, if she didn’t turn him on with her sass. He wanted to be irritated and she verbally smacked him between the eyes. A tiny part of him wanted to walk away from her and never see her again for the sake of the memory of Felicity. Shit. The more his gaze roved over Samara Jacobs, the more he wanted to take a trip all over her body, learning what made her laugh, sigh, and whimper in delight. She, unlike the female population of Snake Falls, Ohio, didn’t buy into his line of work. The simple fact that she gave him a run for his money enticed him.

Just as she turned on her heel to leave, he touched her arm, amazed by the silky smooth texture of her skin. “Wait, you watched my show?”

“Yes, I saw the show. I prepare the transcripts, remember?” She glanced away, only to stare at him again. “If it’s truly pretend, then you’re golden—only a fiction writer can make up some of the stuff that happens to you. Then again, I don’t buy into ghosts anyway. As far as I’m concerned, it’s all bunk.”

“How so?” His mouth watered for a taste of her. Anything to keep her talking so he could be around her more.

“Because, you go to places infested with rats, raccoons, and other vermin. Critters make noise and scatter when the light hits them. And the static from your camera isn’t a voice, so don’t try to convince me otherwise.” 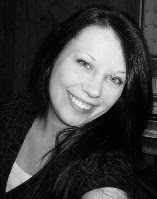 I always dreamed of writing the stories in my head. Tall, dark, and handsome heroes are my favourites, as long as he has an independent woman keeping him in line.

I earned a BA in education at Kent State University and currently hold a Masters in Education with Nova Southeastern University.

I love NASCAR, romance, books in general, Ohio farmland, dirt racing, and my menagerie of animals. You can also find me at my blog

Hi Lisabet - Thanks for having me! It's been a blast here at your blog and I'm looking forward to any questions, comments, or anything the readers can throw at me.

Welcome to Beyond Romance. Sorry I'm popping in a bit late - the world always interferes!

I can SO identify with a klutzy character. I'm the one who broke my foot at a chess tournament... Yes, there's a story there, but I'm saving it!

Wishing you great sales and reviews with Careless Whisper!

Thanks Lisabet!! I'm out stomping the pavement to get folks to ask questions.

I haven't done anything as interesting as breaking a body part at a chess match, but hey, we all have our stories. Hope to hear it soon! :)

Oh, jeez...I can't tune into this blog anymore. My husband is going to come home and demand divorce. I've bought yet another book. >sigh<
Great excerpt! It sold me.

Thanks Justine!! Hope you like it. Thanks for stopping by as well. always fabulous to meet new to me readers!!

I like humor in a story. I can identify with a klutz. That klutziness makes the character realistic and human. We all do it. We all need to learn to laugh at ourselves. Careless Whispers sounds good.

Thanks She! I can identify with the klutz, as well. Plus it just seemed to humourous to put a person in a situation where they should be completely on their game, tripping and showing he's human. Hope you enjoy Careless Whisper!

I can certainly identify with the klutz. There's a reason I avoid ladders now!

Ah, I love imperfect characters. And as someone who married a nerd, I have a particular fondness for them as well.

I love the premise of your story. I'm such a fan of Ghost Hunters, especially the slap stick via Steve and Tango. I think I'm gonna have to pick up a copy!

Thanks Lynne - Glad you stopped by! I'm not one much for ladders either.

Thanks Gillian. I love Steve and Tango, too. Grant has the nerd look down pretty well, too. I have a particular fondness for Ghost Adventures, but hey, with arms like Zak's...you can't help but look.

I love a sexy nerd, they tend to have hidden depths that make them a very interesting hero.

I should mention that I'm a big fan of raccoons. I've had epic battles with them, but they're so intelligent and in your face, you can't help but admire them! I'm not sure I've encountered raccoons in romance before.

(Now there's an original notion - a raccoon shifter! Maybe even more extreme than my penguin shifter!)

Cathy - Ryan is a pill, plain and simple. He's a nerd. He knows his paranormal stuff, but when it comes to romance, he's truly clueless. Love them that way. Thanks for stopping by!

Lisabet - We have a family of raccoons living in our woods, so as long as they aren't getting hinky under my bedroom window, I could care less what they do. But, I've heard of groundhog shifters, prairie dog shifters and I believe a chipmunk shifter...so anything is possible. :)

The klutz makes me smile. I want to immediately help him and mother him. As you said, the klutz is a more human character. Yes, we all love Mr. Perfect but our heart just melts when he has a human flaw.
I personally love nerds.

orelukjp0 - thanks for stopping by. I find I write nerdy, or klutzy guys better than Mr. Perfects. Maybe it's because that's who I want to see. :)

Awesome excerpt, Wendi. I also am sold on your book as one of my must reads. I love characters with flaws that feel real...and humor is such a bonus in romance stories. Thanks for sharing.
Kay Dee

Thanks Kay Dee! I'm glad you like it. Ryan is a favorite. He's a pill, but yanno, what man really is perfect? :)