The Next Big Thing

Paranormal romance isn’t just for Halloween anymore. In fact, it hasn’t been for a long time. In the 1990s, vampires entered the romance world in a big way. Since then, paranormal romance has gone from a tiny niche to a huge market. There are old-school vampires that can’t walk in the sun, new kinder, gentler vampires, psychic vampires, and pretty much every other possible permutation of vampire characteristics.

On the heels of vampires came werewolves. Different authors created different werewolf mythologies. Like vampires, the werewolves of romance can be good or evil, and immortal or mortal. Some change on the full moon, others change whenever they need or want to. Other shapeshifters soon came on the scene, from werecats to weresnakes (and pretty much everything else you can think of). I’ve even read a book with an octopus shifter!

As a paranormal romance lover, I really enjoy the diversity available in vampire and shapeshifter romances, but I am always on the lookout for something new. I admit I have a small (okay, huge) demon fetish. Anything with demons is sure to catch my attention. I also enjoy a good old-fashioned ghost story, the spookier the better. I admit that it often annoys me when one of the protagonists is a ghost, because I start getting hung up on the mechanics of ghost sex, and how unlikely a happy ending between a dead person and a living person is going to be. But maybe I’m the only one who does that.

Lately, I’ve also seen a sudden uptick in zombie romance. Zombie fiction has been around for a long time, but zombie romance? It’s weird, but if done well I think it actually works. Squeamish readers might disagree, though. *g*

I’ve read vamps, weres, demons, ghosts, various psychic phenomena, and now zombies. What other kinds of paranormal romance are out there that I need to try?

And readers, what kind of paranormal romance would you like to see more of? I’ve tackled werewolves, and demons (of course), in my Outcasts series and in a couple of standalone stories. I’ve even done werelions in a short series with Beth Wylde, but I haven’t branched out too far into the paranormal world so far. What kind of paranormal plots / characters do you think aren’t done enough? Which ones are overdone?

What’s going to be the “next big thing” in paranormal romance? Anyone care to hazard a guess?

Whatever the next big thing turns out to be, I can’t wait to read it… 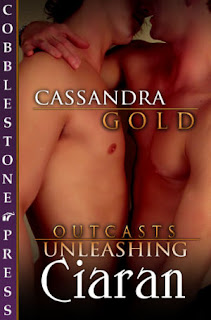 Blurb: After all they’ve been through together, werewolf Drew and his half-demon mate Ciaran are more than ready to live a normal life. Then Drew’s peace of mind is shattered by a mysterious 3 a.m. phone call. A new threat has emerged, from a direction he never thought possible. This time, it may be up to Ciaran to protect Drew…

Buy the book at Cobblestone Press.

An octopus shifter? Good grief! I've been thinking about writing a penguin shifter - as a parody - but I didn't dare for fear of insulting someone. Obviously, I needn't have worried...

Thanks for joining us at Beyond Romance!

I don't know if I can predict the next big thing in paranormal romance. In fact, I don't even know if I want to try! Personally, I love witches, so in my paranormal stuff that's what I'm centering on. But to be honest, I'm moving away a bit from the paranormal scene and focusing instead on a sister to paranormal romance -- fantasy romance. No doubt that will eventually become overdone, but for now it's a fresh new scene for me to explore with my characters!

Thanks for talking paranormal with us!

Thanks for having me! The octopus story sounds bizarre, I know, but I thought it was quite entertaining. I suppose a well-written book about almost anything can be good, lol.

As for the penguin shifter, that would be pretty funny...

I haven't read many witch romances, especially recently. Maybe that's what I ought to pick up next.

I admire anyone who writes fantasy well. I'm just too darned lazy to do the worldbuilding properly. I love how easy it is to immerse myself in a different world when I read a really great fantasy, though. :)

I've noticed a lot of angels lately, but I have not been impressed by any of the books I've read. I much prefer demons. :)

I like any kind of shifters, and think they will continue to be popular. I've read a couple bear shifter stories recently that were really good.

I think I'll pass on the zombie romances, just the thought makes me go ewwww. I agree that ghost romances are hard to do (I've read a couple where I really hated the ending.)

I'd like to see more Faery romances. There's a lot of Fae Urban Fantasy, which I enjoy, but I'd like more out and out romance, too.

Zombie romance and zombie stories are on the rise. So are angels/fallen angels/nephilim (sorry if I spelled that wrong)

Shifters are becoming big but so is, as was mentioned fantasy romance (elves, fairies, etc.)

Since I'm a big sci-fi/fantasy lover, pretty much all subgenres are fair game and I'll try at least a new type at least once.

It's fascinating, interesting, and I can't wait to sink my teeth ;) into them.

Cynthya- I definitely prefer demons too. :)

And you're right, most Faery stories are UF. I wonder why that is?

Lakisha- I've gotten more into sci-fi lately. I never used to like it but I've read some good sci-fi romances in the last year or so that have changed my mind about the subgenre.

I'm like you, I'll try just about anything once or twice.