I knew I wanted to blog, but I had no clue what to blog about…and then I remembered what season this was. It’s the best out of all the five seasons. What’s that? You say there aren’t five seasons, Jaxx, only four. Silly Jaxx that must be a typo. Well, that where you would be wrong, wonderful reader. There are indeed winter, spring, summer, fall and FOOTBALL! Football season is going on right now! I would like to share my love for the season and why I like it!

First, what’s not to like? Strong, strapping men, flexing big thick muscles, wearing spandex outfits that leave nothing to the imagination…AND they run around sweating and tackling each other! Man! If there’s a downside to football season I don’t know it! The beer, the commercials, the men, the contact, the bodies, the— Ahem. My apologies…I digress. Let me calm down and tell you why I like this game. 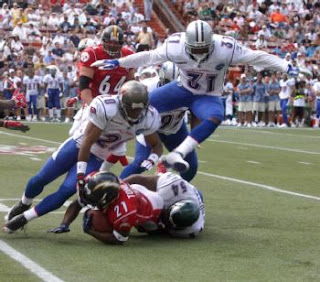 For me, football season is 16 weeks of a testosterone festival. It is all types of sexy sweaty men, all shapes, sizes and colors, wearing little thin clothes climbing all over each other. I am one of those football watchers that don’t have a favorite team, per se`. I mean, I do live in Indianapolis so I route 100% for the Colts when they play and my hometown is New York so I will also route for the Giants when they play, but I am not a diehard fan by far. I watch for the glory of the game and the sexy bodies on the field. Don’t get me wrong. I may be watching for the sweet bodies running across the field, but I do know the rules. I even played the game as a running back in college. Come on! You know I did…I had to. Did you not read the paragraphs before?

My thought for this article is to of course share my love for the game, but to also encourage you to watch so that you could enjoy it as much as I do so that it will never go off the air!

A hearty welcome to Beyond Romance!

I am definitely NOT a sports fan... but hey, BR is an equal opportunity blog and I'm happy to spotlight my guests' passions!

Thanks Lisabet!
Not that many women I know love the sport. I do know a few who watch, not for the game, but purely for the visual aesthetics. Much like I do. LOL