Fetishes and Toys: Freaky or Sensual?

My topic today is Fetishes and Toys. Are they freaky or sensual? The question is relevant in the world of romance. I mean, honestly, how many fetishes and toys do we see in the romance novels we read? How many of them turn us on or off? Well, I decided to explore that for a bit. Now, I’m not going to get into who likes what or what I like (never that!) I’m just going to take a fly on the wall approach. :-)

I looked into fetishes that men have because, well, I like men and the more I can learn about them the better my characters get. (*shrugs* that’s my line of thinking anyway) When I started to look into fetishes I asked around and found that people can have a fetish about anything! Shoes, stockings, nails, hair, body parts from the top of your head to the soles of your feet! So I wondered how does one ‘get’ a fetish? I asked around about that, too. Some answers I came across made me go ‘hmm, I can see that’, some made me go, ‘oookaaay, I’ll give that a nine on my strange-o-meter’ and I even came across a few that I had to add to my, ‘damn!’ list.

For example: one guy told me with such lust in his voice and eyes about how he absolutely loved high heels on his women. He was in the closet when his sisters friend spent the night and his, umm, appendage (that’s a good word) was pressed against the shoes she had worn to a party as he, well, pleasured himself. He could feel the shoe, but didn’t want to draw attention to himself by moving around so he left it. As an adult he makes sure his women wore shoes in bed with him because it takes him back to those good feelings.

Another guy confessed that the very first time he was with a woman just as he climaxed she scratched his back so hard he could feel blood trickling down his back as he lay on her catching his breath. At the time it stung like crazy, but when she was doing it at the time of his greatest pleasure he connected the two. He now gets very turned on by women with long nails and asks that they scratch him doing sex.

With toys, in most cases you make a conscious effort to use them, although I did come across a story where she just sprang the thing out on him. He did not appreciate it at all. The men that had issue using them to enhance their sex only had a problem with its look. The anatomically correct looking toys bugged them for some reason. (*raised eyebrow look*) I asked if they got past it and with smiling faces they replied that with so many colors and shapes on the market they couldn’t pass up all the good that came with the toys. You put those vibrating do-dads in the right places and BANG! Fire crackers, bright lights, shimmies and shaking all around! Men are open to the experience and experimentation of toy play. Who knew!

You may find these to be a little weird or freaky or maybe sensual. I don’t know. This is not Psych 101 by Dana Littlejohn, by no means. This info came first hand from talking to close to fifty men over the age of 30. (I told them it was a survey for school, sexual psychology or something. LOL) So with this new info I came to the conclusion that…men are strange! Kidding! Seriously, fetishes can derive from anything and whether they are freaky or sensual depends on your taste. The use of toys not only can bring fun and excitement into the bed, but totally can enhance an already good feeling.

From what I learned from the passion-filled explanations of the men I spoke to about their fetishes and toy play, I came up with two stories. Happy Feet is a short story about a man who had a foot fetish and fell for a woman he thought had beautiful feet. This December I have a Christmas story coming out called Reindeer Games, which is about a couple who have been having an ongoing booty call for years and the woman has decided it was time to make him permanent in her life. Both books make their home at Phaze. Be sure to check them out!

Until next time…Dana has left the building! 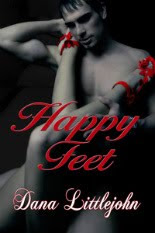 Bio: I was born in Brooklyn, NY on a snowy winter's day. I was told that I interrupted my parents' Christmas party. It was well after midnight, but my arrival put a stop to the late night party and stopped my mom from going ice skating with everyone else at Rockefeller Center. I moved to Indianapolis, In. in summer of 1994 where I still live with my husband and children. In 2003 I picked up my pen again and I have no intentions on putting it down. Come on a imaginary trip into my world. You'll enjoy every minute of this wild ride!

I think that if we're all honest with ourselves, we all have something that turns us on like crazy that wouldn't be considered withing the range of the "usual." I know I have many, but my biggest one has got to be words. This is a fetish that all romance readers have in common. And we, as writers, can exploit that love of the sensually-turned phrase to make many of the fetishes that our characters have seem sensual and delightful instead of weird, if we approach them with sensitivity, empathy, and genuine joy. Maybe not all, but then again, I'm still not convinced that it's impossible, depending on the skill and sensitivity of the author!

Thanks very much for joining us at Beyond Romance.

I find the topic of fetishes fascinating. Writing stories about them is a real challenge, because you need to convey the emotional charge associated with the fetish to readers who might not share the same turn-ons. I wrote a story once about a man who had a fire fetish; he gets aroused by fire. Eventually he becomes an arsonist...

Dark, but one of my favorite tales.

I love your explanations of fetishes Dana. Of course I'd like to know which ones completely threw your strange-o-meter into gear. LOL! Great post.