All You Need is Love 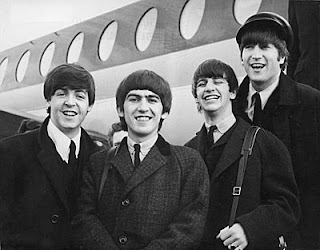 Yesterday, John Lennon of the Beatles would have turned seventy years old. A few months ago, Ringo Starr turned seventy. It's all amazing to me, a member of the "Beatles generation". Where did the time go?

I was in fourth grade when the Fab Four appeared on the Ed Sullivan show (in black and white!). By the time I was in sixth grade, I was as devoted a fan of the mop-headed men from Liverpool as anyone, despite my tender age.

The Beatles inspired me to write my second play. (The first one was a satire about the 1964 presidential election.) I might even be able to dig out the manuscript from the "Writing" box I've dragged around with me for the last half century or so. The play was a fantasy about meeting the band on a train trip (even then travel was a huge turn-on for me) and helping them to escape from a mob of crazed fans. Of course the tale had a love interest. Unlike most Beatles fans, I was most seriously enamored of George Harrison. I liked him because he seemed quiet and intelligent and less cocky than John or Paul.

The Beatles wrote the soundtrack of my teens and twenties. I will never forget sitting in a darkened room at a party (I was probably thirteen), tears streaming down my face, with "Michelle Ma Belle" playing over and over. The guy I had a huge crush on was "making out" with another girl. I'd never felt so desolate. That song still makes me feel sad.

Then there's the relatively obscure Beatles song "Misery", which my siblings and I sang in three part harmony on a local TV talent show. (We came in second.) Occasionally, when we all get together, we belt out a chorus.

I recall kissing my first lover on the couch in my mom's living room, the White Album in the background. "Dear Prudence" and "Rocky Raccoon" mingle with my recollections of his taste, his smell, his scratchy, romantic stubble. I was deeply in love and playing with fire. Fortunately, I did not get too badly burned.

"Within You Without You" recalls my high-school era trip to the ashram, where my aunt was the devotee of an Indian guru. "Turn off your mind, relax and float downstream..." I remember trying to meditate and being horribly frustrated because there was no way I could turn off my mind...!

One of my most poignant Beatles memories does not involve them directly at all. I was in Prague, a magical city where the people are for some reason especially devoted to John Lennon. As we walked across the ancient Charles Bridge, a young man with a guitar began singing "Imagine". A crowd gathered around him, singing along, voices rising into the chill, moist air and vanishing into the fog. "Imagine all the people, living life in peace..." The moment had an ethereal beauty that I will never forget.

In the last couple of years, since I bought an MP3 player, I've been listening to The Beatles' music once again. It holds up amazingly well, I find, especially the later, more complex songs. And I find myself singing along, as I lift my weights or do my leg lifts. It's hard not to.

I can barely believe that two of the Fab Four have passed on. When I look at the early pictures, where they are so fresh-faced and eager, I can easily summon the electric excitement they kindled in me - and in so much of the world. And it bothers me, a bit, that many teens today have scarcely heard of them, and definitely don't care about a band that was popular in their grandparent's day.

Yikes! I'm old enough to be a grandmother myself.

Well, wherever you are - Happy Birthday, John! Maybe we should make you the patron saint of romance writers. After all, it was you who sang: All you need is love.

Posted by Lisabet Sarai at 5:17 AM

I have a CD of Beatles's songs sung by children. It's so sweet. My daughter got very sick of it, but she does know who they are and Elvis too.