Happy Anniversary to Me! 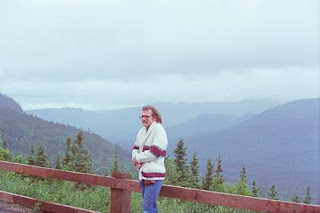 Today, Sunday the 20th of June, is my twenty eighth wedding anniversary.

I never expected to get married. There were so many divorces in my family that I was convinced marriage was a waste of time and emotional energy. I knew I could support myself through my career; I didn't need a man to take care of me financially. I felt comfortable having relationships outside of marriage, so I could fulfill my needs for sex and companionship. Meanwhile I suspected that the chances of meeting someone who wouldn't bore me after a few years was pretty small.

I'm so glad that I was wrong.

K. was the first men in my life who pursued me. I tried to discourage him, but he was incredibly stubborn. (Nowadays, he says he learned about stubbornness from his wife, but it's not true!) I had to admit that from the first it was amazingly comfortable to spend time with him. I felt as though I'd known him for years. As I've written elsewhere, he seduced me with tales of his extensive travels. I sat there in the restaurant, fascinated by his adventures in Europe, Africa and Asia. Then he looked me straight in the eye and said, "I'm always looking for someone to travel with...".

Our wedding was a highly personal celebration with more than a dash of hippie flair. I wore a white sari with a red blouse and skirt underneath. The ceremony took place by a pond in a state park. It was the only day that June that it didn't rain. (We were ready, just in case, having rented a tent and bought a sledge hammer. After that, we always called it our "wedding sledgehammer"!)

We wrote our own vows and chose our own music, which we played through the speakers of K's car. The food was picnic-style. We cooked some of it; close friends and family also contributed. The guests sat at picnic tables or on blankets, eating lasagna, gazpacho, home-baked bread, Indonesian sate and cheesecake.

I tried to find some photos of us as a couple, but apparently we were too busy organizing things to take many pictures. So I've included the photo above, taken on our honeymoon. We went to northern Canada, the Laurentians, and even though it was July, it was, as you can tell from my husband's hunched shoulders, pretty chilly!

It didn't matter. We were just happy to be together. And remarkably, we still are. I didn't realize right away what an excellent decision I'd made, agreeing to marry him. Not only did he turn out to be intelligent, responsible, considerate, creative and funny, he also had all these practical skills like plumbing and electrical wiring. Oh, and he was nearly as interested in sex as I was!

Twenty eight years later, we're still together and still in love. We've had lots of adventures adventures together--he kept his promise to take me traveling--and I know that even though neither of us is a spring chicken, we'll have more.

Today I'm incredibly grateful. I'm so glad that I turned out to wrong about marriage. If I'd been a bit more stubborn, I might have succeeded in driving away the man who has become my lover, my partner, my editor, my carpenter, my system administrator--and my best friend.

You truly are blessed and I wish you many more happy years together. Happy Anniversary...a day late but heartfelt.

Twenty eight years with a truly wonderful man; you lucky thing! Lisabet, I wish you as many more fabulous years together!!