As an author I tend to get many curious looks and questions when people discover what I do as a ‘hobby’. I say hobby because while this isn’t my primary job, it is the one that keeps me sane. I love putting words down and sewing them into tales that entertain and sometimes educate my readers. And while many don’t understand how you can put so much time and effort into a ‘hobby’ that doesn’t pay like a full time job, it’s the love for words that has us authors striving to be the best at what we do.

At the end of March I attended a conference in Pennsylvania called The Write Stuff. I thought of it as a college course crammed into four days of intense learning. I wasn’t disappointed. They covered everything from how to write a novel and end it, to what a prose and premise are. One of the best pieces of advice I received at this meet was from author James Frey. He said to us that anything we write is ‘crap’. Yes crap, because any story can be made better with a little education and lots of practice.

What we need to remember is that all authors are liars and our goal is to be an expert liar. This can only happen with a lot of research and patience. To weave together little intricate things in your story to make the tale more believable for the time and place it’s set. Dialogue, cars, computers, what people eat/wear, all of these things combined together, when done right, will make your story more believable and less, dare I say, ‘crap’. To some authors these things are a given, a knowledge that everyone knows. So why am I saying it? Well, as I learned on this weekend of substantial information, what comes easy and evident to some, is not to others. For instance, I didn’t know I was a liar. Something as obvious as this actually had a light bulb going on in my head and suddenly it became easier to write the scenes I was previously blocked from.

There are so many things which go into creating a story. So many in fact, I sometimes lose track of what is what. Premise, Prose, Plot, Character Development, Narrator, Limited Omniscience, Full Omniscience. Okay, I had never heard of the last two until the conference but trust me they’re helpful. Actually here’s a great site for you with definitions. http://www.tameri.com/write/lexicon.html I refer to it when my brain decides to leave me at pivotal points in editing.

So there you go. A little knowledge I learned and passed on to you. We’re liars who write ‘crap’. Hee hee hee I love my job!

Thank you Lisabet for having me. Nothing is as wonderful as spending the day among friends.

Bio: Once Rebecca Rose picked up her first romance novel she knew her destiny was typed on those pages. She lives to find romance in ordinary life doing everyday things, by believing you just need to be conscious enough to look for it. While being slightly dyslexic has created some challenges for her, she feels compelled to write about the characters living in her head.

Divine Turmoil was her first adventure in writing novel length stories. After finishing this work of love, inspired by the death of her Grandmother, she felt the need to find out what happened to the other characters. And a series was born.

This started a new and exciting life for Rebecca and her family who live in Western Massachusetts with their three tenacious children, deaf dog Max, and three cats: Enzo, Snowball (who’s all black) and a very lazy Maine Coon named Murphy’s Law. She’s also had numerous short tales published with her hometown magazine.

Reading was, and still is, an enjoyment that her whole family takes pleasure in. It is the only time the house is quiet, unless the family has gone hiking. Otherwise, Guitar Hero guarantees their home is never dull.

Rebecca is always delighted to hear from her readers. www.authorrebeccarose.com 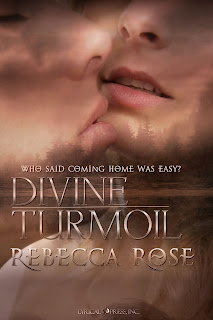 Blurb: A family illness draws Serena home to face issues she's avoided for years: an absent father, an ornery sister, and steamy neighbor Brian Allan. With one broken marriage behind him, Brian can't believe he's falling for Serena. She's a risk on heels -- spirited but vulnerable, and utterly irresistible. He'd be crazy to give her a second glance. She'll break his heart. Or his bed. Probably both...

Excerpt: When the knock came on the screen door, Serena happily yelled an enthusiastic, “Come in! I’m down the hall!” Given she’d spent the morning making sure the yard was in the best shape possible for her mother’s arrival the next afternoon, she was running a little late and still getting dressed after her shower. Serena was just pulling on her shirt when she heard Brian’s voice.

“Hey, babe. I’ve come to join you, Hope and Will.” Brian walked right into Serena’s room, since the door had been left open.

Serena caught a glimpse of the heat rising in Brian’s cheeks before he turned his back to her. God, he’s cute was her first thought. “Knocking’s nice, sweetie.”

“I did knock. You told me to come in, remember?”

He was embarrassed, Serena realized. And this wasn’t a man that would embarrass easily.

“Sorry,” Brian said in more of an accusing tone than an apologetic one.

“It’s nothing you haven’t seen before on another woman. Hey,” she said putting a hand on his shoulder, “it’s okay.”

He was watching her so intently, Serena felt heat rise from her toes to wake every nerve in her body. “Really... It’s o...okay.”

Before she knew what was happening, one of his hands was in her hair, while the other wrapped around her waist, pulling her close. His mouth was savage on hers, and his tongue demanded hers to play. It only took Serena a second to register what was happening. She was becoming a prisoner to Brian’s desires. Without thought, her hands went possessively into his hair and her body responded to his in a violent need.

The world spun away from them. Brian’s lips were full and soft with a mouth teeming of potent flavors. When his hand streaked up Serena’s back, her breath hitched and her hands began to roam, creating a hurricane of sensations that rushed through the both of them. She could feel the tight muscles under his shirt, and whimpered at the thought of feeling them without any barriers. When Serena pressed her nails into Brian’s shoulders, he trembled. This is quickly going to get out of hand, she realized, if I don’t do something.

Brian stepped back at the same time she did. His eyes were glued to her mouth, which was still slightly parted and swollen. He cupped her face and looked intently into her eyes. “My God, Serena, you’re driving me crazy.”

Serena tried to say something, but nothing came out. They both stepped farther away from one another when they heard the rap on the door. Hope’s voice carried through the house as Serena emerged from the hallway trying not to appear like she’d just gotten done doing something naughty.

“You seem a bit pale, Serena. Are you feeling all right?” Whatever she would have said next was lost when Hope saw Brian also emerging from the hall. “Oh! Did I interrupt something?” She gave Serena an accusing look, as if to say ‘I can’t leave you alone for more than a minute without you getting into trouble’. “You’re still planning to come with us, right? You did promise Lizzy.”

“Of course I’m still coming. I don’t know what’s going through that head of yours, but I’m pale because I spent the morning doing the lawn and I’m a little tired.” She gave Hope an insolent glare. “We’ll meet you in the car. I have to find my sandals.”

“Well, make it quick.” With that, Hope tromped out the door.

“That girl could use a vacation and some good ole lusty sex.” Brian nodded his head in agreement with himself.

“She makes me feel like I just got done doing something sinful and got caught by my mother. Damn her!” Serena said in a raised voice.

Serena couldn’t help but laugh. It was as if Brian knew exactly what would melt away all the tension. “Come on, Bri,” she said, looping her arm through his after grabbing her sandals. “If we take too long, she’ll think we’re having a quickie.”

Brian raised his eyebrow mischievously. “She has a dirty mind, eh? How about you?”

Serena winked at him. “It runs in the family.”

“I’d like to see what your mind could come up with sometime.”

Welcome to Beyond Romance! I've always thought of myself as an honest person, but then I never thought of inventing characters and plots as exactly lying...!

Divine Turmoil is now on my TRL Rebecca. I loved the excerpt. I enjoyed the whole post today.
Carol L.
Lucky4750@aol.com