First of all I’d like to thank Lisabet for having me today. I always enjoy going to new blogs and meeting new people. As some of you may not know me, I decided to tell you a couple of things about myself.

1.To begin, I’m a southerner born and bred. I love the South except in the middle of the summer when the mosquitoes and heat are enough to kill you. In July we escape for a week to the North Carolina mountains. We always go to Sugar Mountain which is in Banner Elk, NC. It’s usually twenty degrees cooler there, and you can actually go outside and enjoy yourself.

2.I started writing in 2002 because of my son. He wrote a book which was absolutely fabulous so I thought I’d give it a try myself.

3.Nobody liked my book. My friends said the heroine was a sweet girl so naturally she was boring, and my husband didn’t want me to have the hero lose his leg. Bowing to public pressure, I wrote another book called A New Leaf. At the last minute I entered it in a writing contest sponsored by Oak Tree Press. The book won, and I got my first contract.

4.Since that first contract I’ve had four more books published, and I have two coming out this year. Kara’s Change of Heart is scheduled to be released in June from Lachesis Publishing, and Return Engagement will be released in July by Whiskey Creek Press.

5.I’m a hopeless romantic, probably because I’m still married to my college sweetheart. If you’re curious about how we met, I blogged about that on Valentine’s Day. Go to http://www.elainepcantrell.blogspot.com.

6.I’m also a social studies teacher. In one of my classes we’re studying the countries of Europe which gave me an idea about my blog topic. Since Easter is tomorrow, I thought we’d take a look at some of the traditional ways the Europeans celebrated Easter. Some of these old customs are undoubtedly still around, but not all of them are kept today.

In Sweden, Eastern week begins on Palm Sunday as it does here, but they do have some old superstitions associated with Easter that we don’t have. The Swedes used to believe in witches who were supposed to be especially active during Easter Week. On Maundy Thursday they were thought to fly off on broomsticks to consort with the devil, returning on Saturday.

Also on Maundy Thursday girls and boys dressed up as hags and paid visits to their neighbors. They left a small, decorated card--an Easter letter--in hopes of getting a treat in return. This was especially widespread in western Sweden, but there you were supposed to slip the letter into a person’s mailbox without being seen. In the western provinces they also celebrated Easter with bonfires. Sometimes villages competed to see who could build the biggest fire. They had fireworks too.

Eggs were the most common Easter food, and they were usually eaten on Saturday evening. The Swedes decorated eggs as we do.

On the Wednesday before Easter known as Dymmelsonsdagen people tried to put some kind of silly something on another person’s back, something that would make people laugh. Hopefully, the unsuspecting person would wear it around all day.

On Good Friday boys gathered together, and armed with birch switches they paid calls on the young ladies of the neighborhood. They whipped the girls with the switches until the girls gave them something to drink. And I don’t mean water. On Easter evening the tables were turned, and the girls were the ones doing the switching.

While I was researching this topic I found a web site that I enjoyed. It had lots of pictures and gives you an idea about how the Swedes do things today. The blog’s at http://www.acc.umu.se/~wschedin/easter.html.

Moving to the Netherlands, the day before Lent begins is Carnival day which is referred to as Vastenavond or Fast Eve. In southern Holland the celebration begins on Sunday and lasts for three days. Preparations for the carnival begin the previous year on the eleventh day of the eleventh month when a council of eleven meets to organize the plans. Traditionally the number eleven is the number for fools, and during Carnival people are allowed to be as foolish as they wish. Carnivals feature colorful celebrations with dances, parades and masquerade balls. In each town a person is elected prince of the Carnival and he is handed the keys to the city.

On Palm Zondag or Palm Sunday children scoured the neighboring farms to collect eggs for the Easter sports. They carried a decorated stick known as a Palmpaas or Easter "palm". This stick was attached to a hoop which was covered with boxwood and adorned with colored paper flags, egg shells, sugar rings, oranges, raisins, figs and baked dough figures or swans or cocks. Children also colored eggs which the Easter Bunny hides for them to find. They enjoy a game where two people knock their eggs together to see whose egg will break first.

On Easter Sunday, families gathered for the traditional Easter meal. The table was decorated with colored eggs, spring flowers and Paasbrood, which is sweet bread with raisins and currants.

In Ireland, people danced in the streets on Easter Sunday. The dancers competed for the prize of a cake. They also held herring funerals on Eastern Sunday. Many people gave up meat for Lent, so by the time Easter rolled around everyone was tired of eating herring.

My family has an Easter tradition that we enjoy very much. After church we all pack up and go on a picnic at the lake. Sometimes it’s a bit cool, but we go anyway. It’s especially fun for the kids who can run around and scream and hide eggs until they’re worn out. We’ve taken bets to see which child will fall into the lake first, but so far everyone has stayed dry.

I’d like to invite you to visit my web site at http://www.elainecantrell.com and my blog at http://www.elainepcantrell.com. I have excerpts of my books on my blog, and you can access my monthly newsletter from the web site. If anyone is interested in subscribing to the newsletter just click the yahoo button on the main page. It’s near the bottom. Subscribing automatically adds your name to my monthly contest.

I’d like to close with an excerpt from The Welcome Inn which is a romantic suspense novel. In this excerpt, Buck and Julianna, the hero and heroine, are on the run from some bad guys. The Welcome Inn is available at http://www.wingsepress.com/Bookstore/The%20Welcome%20Inn.htm 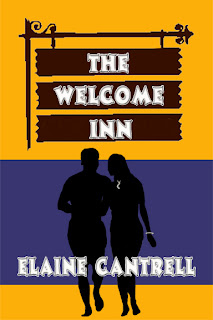 Julianna slid gingerly under the covers and Buck reached for the lamp. He plunged the room into darkness, and both he and Julianna lay tensely in the bed. Both were careful not to touch the other.

Eventually, Julianna turned on her side and spread out, assuming her favorite sleeping position. Buck’s legs were in the way so she gave an impatient kick to scoot him over.

“Stop kicking me,” Buck protested. “You’ve got most of the space anyway.”

“Yeah, you do. I’m barely hanging on over here.”

Julianna sat up and reached across Buck to measure the space. “You have all kinds of room left.”

A short silence fell on the room. “I can’t sleep on this side of the bed,” Buck complained. “You’ll have to change with me.”

Buck turned over heavily, causing the bed to rock and shake.

“Be still,” Julianna smartly commanded. “How can I sleep if you keep bouncing me around?”

A minute or so passed, and Buck turned over again, bumping Julianna with his knees. Nerves on edge, Julianna kicked him again. This time he kicked her back.

War broke out with a flurry of shoving, kicking, and struggling that ended with Buck on the side of the bed that he favored with Julianna molded to his side. She shoved against the bed with her feet in an effort to root him off the edge, but Buck held fast.

Thanks again for having me, Lisabet. Happy Easter everyone.

Elaine,
I wanted to say I enjoyed reading about Easter customs in other countries. I also am a Southerner born and bred and wouldn't live anywhere else.

It was interesting to see the different customs for Easter. I loved the blurb for The Welcome Inn.
Sounds like how my ex and I used to slep. Used to being the key word. lol
Happy Easter and I'm glad to have met you here and I'm off to your blog.
Carol L.
Lucku4750@aol.com

Thanks for stopping by, Andrea and Carol. I really had fun with the post. I love learning about other countries. I've been to Europe once and enjoyed it very much, but I didn't go there during Easter. It would be fun to see some of the things they do.

It was good to meet both of you. Do stop by my blog and website if you can.

Thanks for the interesting facts on other Easter traditions. How neat. ;) Funny how as a kid history lessons are boring, but as an adult, you tend to like them better.

Your excerpt sounds great. I'll add that book to my to-read list!

I'm also adding your website to my favorites. I enjoy finding new (to me) authors.

Thanks! Have a Happy Easter! And I hope the kids continue to stay dry.

Happy Easter!! Thanks for sharing all thoe neat customes

I enjoyed the post and just loved the blurb! OMG, I actually laughed aloud.

I really enjoyed the post and the excerpt was great I could just see them in my mind fighting over the bed.