Another excerpt, this time from Ruby's Rules. It's hard to know how to categorize this novel. It's definitely a romance in a sense. The hero and heroine are clearly in love, no matter how hard they fight against their feelings, and they get together in the end. On the other hand, the book might be labeled as erotica, since it includes scenes where the main characters are involved with other individuals. It also includes a lesbian sub-plot.

I guess you'll have to get a copy from Eternal Press and decide for yourself! 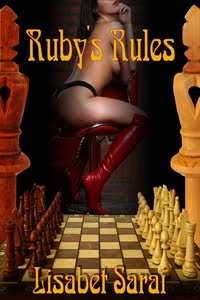 Brilliant, beautiful and ruthless, Ruby Maxwell Chen heads the British business empire founded by her late father, tycoon Liu Shan Chen. She uses both her financial acumen and her sexual persuasiveness to turn every negotiation to her advantage. However, she may have met her match in Richard Martell, the charismatic CEO of an American high technology company, who challenges her claim to a chip fabrication plant in her native Malaysia.

Martell is as expert in the exercise of sexual power as she is, and just as willing to use his skills to advance his business objectives. He invites Ruby and her assistant Margaret to his enclave in Los Angeles, where the owner of the fabrication plant and his innocent daughter are enjoying a lengthy visit Ruby and Rick engage in an escalating contest of wits and of flesh that ultimately involves everyone around them, as each tries to make the other submit. Ultimately, there are some surprises in store for both of them, as they gradually recognize their mutual affinity, and the double-edged nature of power.

“Bravo.” A soft, melodious male voice, and then the sound of applause. “I’m extremely impressed.”

I struggle with my impulses, close my legs decisively and try to stare him down. “I gather you were spying on me and my admirer.”

“Indeed. A most entertaining and instructive tableau.” He enters the balcony-space, letting the curtains close behind him, and picks up the flogger. The knotted thongs dangle an inch above my cleavage. “You seem to be quite an expert in the arts of discipline.”

“Hardly,” I say, taking the whip from him, trying to take control of the interaction. “I am just beginning to explore the possibilities. But,” I say, my eyes narrowing to watch his reaction, “I do find myself quite sensitive to my partners’ desires to yield to my power.”

“I could see that. You knew what he wanted, and you gave it to him.” He paused, and searched my face. “But, do you know what I want?”

“Tell me what you want,” I purr. “I’m feeling generous tonight, and just might grant your request.”

“I want you to take me home with you,” he says with a cryptic smile. And then he kisses me.

“You seem most enthusiastic,” I say, my voice surprisingly steady. “But why should I allow you into my personal space?”

“Because you want to,” he says, deftly extricating my breast from its leather casing and planting a kiss on its tip. “And because you think that you will have more control on your home territory. As an interloper, I will necessarily be at a disadvantage.”

“Let’s go, then,” I say, trying to take the offensive.

“Just one moment,” he replies, and swallows me up in another one of those kisses. My resistance is even more feeble than before. After all, I tell myself, it is only a kiss.