Truce of Trust - An Excerpt 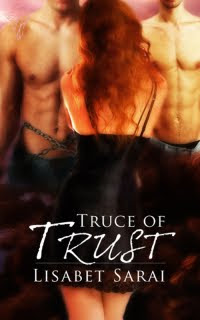 Leah blushed fiercely, as embarrassed as she was angry. Of course, Daniel knew this about her, but still she didn’t want to admit it out loud.

Leah had heard it all before, and suddenly, she couldn’t take anymore. She turned her back on them and headed for her room, ignoring their voices calling after her.

Leah didn't want to surrender, but she couldn't help it. She was dizzy with instantly kindled lust. He nipped at her lips, probed her with his tongue. He drank her in, consumed her. Between her thighs everything melted. The room began to smell funky, as though he already had her naked and open before him.

"You're mine," he whispered. "You'll always be mine. You just keep him around because you're afraid to give yourself completely to me. Afraid of going too far. You don’t trust your own desires."

"No!" His arrogance, sometimes so exciting, was nothing but frustrating to her now. "You don't understand. He's a part of me, just as you are."

He reached for her again. "I'd make you forget him, Leah. I'd beat him out of you." His voice was gentle, contrasting with the violence of his words. Underneath his bravado, she feel his need.

I like this idea of investigating the not so happily very after!

This is different from what I usually read but sounds very interesting.