How Does a Writer Find the Time?

We’ve all been there. Many times I’ve wondered after a hard day, how did I manage to get all that done? Because it’s not only writing that needs doing. It’s not just deadlines that have to be made. It’s advertising, it’s networking, it’s blogging, it’s working on your website. And it’s life. Life gets in the way of everything.

When I worked a steady job I remember remarking, “I haven’t got the time for this.” What with two children still at home, a house that was always in desperate need of repairs, or just simply cleaning, groceries to buy, meals to prepare. And yet I did. If I wanted my salary at the end of the week, and I surely did, I found the time.

Now, I’m retired. Retired from a steady job but hardly retired. Life still gets in the way.

When I first began writing, I remember women complaining they couldn’t find the time. They had a house to see to, a husband who wanted dinner on time, children that needed to be taken to scouts, religious instructions, softball and soccer practice, horseback riding and games.

Who didn’t? In the beginning, I had all six kids living at home. Still I managed to do the things that needed getting done. Granted things became a bit less than perfect. My floors no longer glowed, my kitchen didn’t sparkle. Still things got done. I had help of course. My kids were teenagers and they helped me with the cleaning and did some babysitting. Sure things weren’t done the way I liked them, but I had to make a decision. Did I want a sparkling clean house, or did I want to publish.

Well, I’d had a sparkling clean house for about eighteen years and big deal. What came of it? Everyday that house got dirty again. Everyday the bathroom needed scrubbing, the dishes needed washing, furniture needed polishing and nothing stayed as I left it. And no one expected that it would.

But when I wrote. This was the time for magic. This was when things stayed as I put them. Unlike a clean floor, a book lasts.

I’m still a wife and mother of six. My kids are married and out of the house now, but there are always occasions to make, birthdays, graduations, communions, showers, weddings, the birth of babies, christenings, the list goes on. It’s life.

Still, I write everyday. Whether I have to meet a deadline or I’m simply in the midst of a story, I write. And I write because I must. Finding the time is not an option. I’m a writer. It’s the reason I get out of bed every morning. It’s what I do. It’s what I am.

Patricia Pellicane lives with her husband on Long Island in New York. Her six children live in neighboring towns as do most of her fifteen grandchildren. Her favorite hobby is reading. Patricia insists her ideas for stories come while doing dishes. “Could anything be more boring? It’s nearly impossible to keep your mind from wandering.” In a recent interview she was asked. How hard or easy is it for you to write? Patricia returned with, “Someone once wrote. ‘Writing is easy. All you have to do is put a sheet of paper in a typewriter and stare at it until blood forms on your forehead’. Sometimes writing is exactly like that. And other times it’s a wondrous happening where words flow from mind to fingers to computer screen almost without conscious thought. It doesn’t matter which way it works for you. Once a writer begins the journey, they’re hooked. It’s a drug and you can’t stop looking for that next story, that next high.”

Patricia’s fans can contact her at, ppellicane[at]gmail.com or stop in at her website at www.patriciapellicane.com Click under Books for a list of her twenty two printed published books and About Me to catch a glimpse of what Patricia thinks about life in general and more. 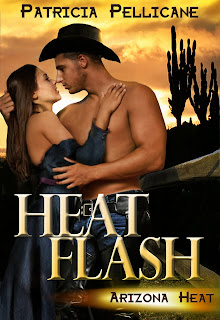 Vinnie never considered her nakedness as she reached for her gun. She grunted at nearly crushing weight of him as he’d slammed into her, spun her around and fell full length upon her. Heavier than a boulder, he squashed her almost flat. She couldn’t breathe.

This monster was going to kill her, and she couldn’t manage enough of a breath to call for help. Damn this brute to hell. Maybe she was going to die, but she wasn’t going to leave this world without a fight. She swung at him, her hand curled into fists. She grunted in pain as he blocked her swing just before she would have contacted with the side of his face. A second later, both her hands were pulled tightly over her head. She tried to kick him; she bucked her hips beneath him in an effort to throw him off. Nothing. He was heavier than the earth and equally as hard. He had to know she couldn’t breathe; her strangled gasps and soft desperate grunts were enough to tell even the most simple-minded that she was in serious trouble. But did he care? Obviously, he did not.

Suddenly, he pulled away, just enough to allow her a lungful of air. Their gazes locked for an instant before his mouth came crashing over hers and what would have been a scream became little more than a moan, lost in the warmth of his mouth.

She gasped in his breath. It didn’t matter. Her starving lungs cared not. Her heart pounded wildly. It didn’t matter that he tasted of clean skin, of fresh air, of warm coffee, a distant hint of whiskey, of man. It wasn’t that he tasted good, of course. A man who broke in couldn’t possible taste good, could he? Didn’t one have to love a man, or at the very least like him, before enjoying his kisses. Well, of course, she wasn’t enjoying his kisses. Good grief! Besides, they both knew he wasn’t really kissing her. The only reason his mouth covered hers was to quiet her screams. And if he was more gentle than most, it mattered not in the least. Liking this man or his kisses bore no consideration. She didn’t know him, therefore, she couldn’t honestly say she liked anything about him. Still, she knew one thing. She most certainly did not like his kisses.

Then why wasn’t she crying, begging him to stop, pleading for mercy

She did none of those things. Even her struggles had ceased. Why? Because there was no need. In truth, he posed no real threat. He wasn’t the madman who had killed her husband. He was the man from the bathhouse and there was nothing threatening in his kiss.

She’d stop him in a minute. All she had to do was wait for him to lift his head, to gasp for a breath of air and she’d scream the house down. She wouldn’t have to wait much longer. She was sure she wouldn’t. Any minute now, she’d get that chance.

In the meantime, it couldn’t hurt if she relaxed. After all, she gained nothing but aching muscles if she remained tense. Once he noticed she was calmer, he’d raise his head. She was positive he would.

The oddest thing happened. Even as she swore it to be impossible, Vinnie’s breath caught in her throat and her heart pounded. Granted it was already pounding with fright, but this…this was something different. It pounded still, and she couldn’t honestly say why.

She forgot her insistence that it couldn’t be so and silently admitted he did taste good. Odd, despite her wild and extreme emotions, she had the sense to realize this man certainly knew what to do with his mouth, especially when that mouth touched a woman’s.

Vinnie couldn’t remember ever being kissed like this. It was more than lips, more than a brush of his tongue. It went deeper than that, far more intimate. It tantalized as it involved all of him, his touch, his taste, his breath, just the right amount of pressure. It was all of that yet nothing she could name.

She frowned as she listened to his softly uttered demand and frowned again as she realized she was unable to maintain any resistance, any thought beyond the taste of his mouth and the sensations that mouth caused her. Something was wrong, yet she couldn’t, for the moment, understand what that might be. She forgot to be afraid, forgot to fight and forgot to think. And none of it mattered. Nothing mattered but the feel of him, the delicious roughness of his clothes against her nakedness, the smell of him and the taste of his mouth. Nothing was more important than her sudden need for more.

Vinnie moaned her pleasure as her lips parted and he dipped his tongue into her heat. And moaned again as she sucked him deeper into the fire. God, she’d never been so hot, never thought it possible to be so hot. She squirmed beneath him, her body telling him without words that she wanted more. Without thought, her hips lifted slightly against his erection.

She smiled at his moan of pleasure. He released her hands, but she had long forgotten the need to fight. Of their own volition, they cupped his cheeks, discovering the rough texture of whiskers, then threaded into crisp, clean hair. God, she loved this more than she could say.

And when his hand slid down the length of her, she almost cried out her pleasure. He murmured something, she didn’t know what and it never mattered less. The only thing that mattered was he should never stop kissing her, never stop breathing her.

She smiled as the words slowly penetrated a fog of desire. Yes, she wanted to cry. Oh yes, please taste me. The thought came, but she never said the words. Never got the chance for his mouth had already left hers to settle deliciously against her throat and moved to where her shoulder met her neck. God, did anything feel better than the touch of a man’s mouth on a shoulder, than the roughness of whiskers as they moved over soft skin?