Stop and Smell the Detours!

Life has a way of controlling us instead of the other way around. The whole “best laid plans” thing…

For years, I tried to be in charge of my life but things kept getting in the way. My plans for college fell to the wayside due to a number of factors. One being I was too young! *cackle* Youth truly is wasted on the young. Instead of finishing my degree, entering the Army as an officer and hopefully law school bound—I dropped out and enlisted.

Detour number one. I loved the Army. After basic training, anyway. Basic training in July in Oklahoma in the hottest summer on record. Big yuck! But I loved Germany. When I returned to the States, I went back to Oklahoma with my sergeants’ stripes and a position as an instructor at the school where I learned my job.

I married twice while in the Army. Of course, there was a divorce in between! My first husband was a mistake we don’t discuss in my family. My second, well, we lasted nearly eleven years. Not bad. But because of him, I got out of the Army.

Detour number two. After the Army, we moved to his hometown of Brooklyn, New York. Yes, small town Arkansas girl in the big city. Took me two years to get the nerve to drive! As a former missile specialist, I was qualified to shoot bottle rockets on the 4th of July so I took the first job offered me. A clerk in a tax department. I couldn’t afford to go back to school just then. I’d backed away from my dream of becoming an attorney when I decided I wanted a career in the Army.

I worked in accounting and eventually received a degree in the field. In the end, I loved New York. Would have been happy there. Except for the divorce.

Detour number three. Living alone in the big city wasn’t very appealing. My dad had had a couple of heart problems, bypass surgery and the like. It was time to go home. As much as I missed New York, it was the right decision. My stepdad died about two years after I returned; my dad a year and a half after him. I still miss them both terribly so many years later.

But I was here for my mother. My stepdad was seven years younger than my mother. She never expected him to go first. She was lost. Sometimes, she still is and it’s been thirteen years this month.

So here I was, back home, working as an accountant, but something was missing. I needed a hobby. A creative outlet. Creative accounting would only get me in jail. Then in 2004, I discovered fanfiction.

Detour number four. I’d always enjoyed writing, did well in classes and the like but never thought to put anything out for people to actually read. With the internet, I found my creative outlet. I enjoyed creating stories about characters in my favorite fandom. Even more, I enjoyed creating original characters within the stories. Then a friend of mine, Delilah Devlin, read some of my fanfiction. Delilah and her sister Elle James are both published authors. I’d known them since high school. Elle and I were in the same class and had been inseparable back then. We’d kept in touch over the years. Both of them encouraged me to try original fiction and submit it for publication.

Detour number five. My first book, THIRTY DAYS, released in December, 2006, with Liquid Silver Publishing. I was ecstatic! And hooked. Subsequent stories sold to Ellora’s Cave, Kensington Aphrodisia, Black Lace and The Wild Rose Press. I write a mix of gay, straight and bisexual romances! And I love it. Of course, making a living off writing is very difficult. Only the very top tier of authors are actually getting rich. Some midlist authors can make a living. Most of us flounder with our evil day jobs and work on our books in our spare time.

But I had a goal! Write to pay off debt, retire early, write as a living! Yay!

Detour number six. The economy crashed. I ended up laid off in October, 2008. So much for the goal! Scraping by on unemployment, part-time work and royalties is interesting. But, you know what? I’m happy. For the first time in my life, I’m really happy. Yes, I’m mostly broke. *cackle* But I don’t have the massive stress of my full-time job. I love spending my free time writing. I treat it as a job, with hours and all that, but I’m happy to go to work!

Life is full of detours. Very few people actually end up spending their lives as planned. I learned to stop and smell the flowers along the detours but I finally found what I want to be when I grow up. Since I turned fifty earlier this month, that’s probably a good thing. *cackle*

My nineteenth story, ANGEL MOON, released in January, 2010. A little twist on vampire and angel lore, my creatures are aliens. Think space cowboys with fangs. And the angels are the bad guys. Sometimes the demons need a break! 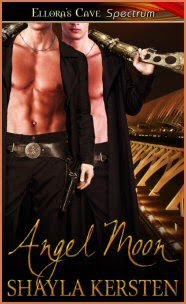 Terra offers sanctuary to both Angellum and Virkola. Unknown to the humans, a truce exists there. To Terrans, the two species exist as myths. One is a frail, winged creature from religious texts. The other, a demon of the night, living off blood. Both are far from the truth…

Sorin thought sanctuary was the answer to their problems. Terra with its plentiful creatures, full of fresh blood and off limits to the millennia-long war with the Angellum—who wouldn’t think it paradise? Except paradise comes at a high price. Claiming a bounty on a renegade angel hasn’t ended up the way he planned at all.

Teo loves his ship, his life in space, but he loves Sorin more. The plan seemed sound, but the bounty is a fraud and now the price is on him and Sorin. He’ll make the best of the rest of his life with Sorin, even if it’s only for a few weeks.

But when hope appears from an unexpected source, both men grab chance by her wings.

I really resonate with your post. My life has not turned out at all the way I expected it to. Chance events and unexpected opportunities both have a way of moving us onto new paths.

All the best,
Lisabet

Hiya, Lisabet! I just got home after getting Momma settled. She had cataract surgery this morning!

Thank you for allowing me to guest blog! I consider my life an adventure and while it wasn't the path I chose, it's been a blast getting here! LOL

I can so relate - divorce, single mom, taking care of a mother with Alzheimer's. Writing came later but I'm so grateful to finally be doing something I love.

Hey Shayla,
What a wonderful post you've put up...life it seems rarely works out the way you have it planned in your head. Growing up in an abusive home I never thought that I would ever live to see the day that my Mum would finally leave my father BUT it happened...after 24 years of misery...she finally gathered up the courage to take the steps despite all the objections from everyone including her parents. I was proud to be by her side every step of the way knowing in my heart that she was doing the right thing for the first time in her life. My grandparents had married her off in an arranged marriage when she was barely 16 years old...so she definitely veered off the path that she thought she would end up dying in...It's now been 7 years and she's slowly but surely making more sense of her life and gaining control of her own destiny.

Thanks for the thoughtful post, Shayla, and congrats on 19+ books! May all the twists and turns bring you that many times more!

Wonderful post Shayla! It really is the journey and not the destination that ends up defining you;-)

Hi Shayla. Thanks for the great post. Life sure does have lots of detours. That is wonderful you all have stayed friends. Congrads on all the books.
Sue B

Hiya, GPS! So many writers I know didn't start writing until later in life. Maybe we need the life experience before we can do justice to the voice in our heads!

s7anna, I'm so glad your mother found the strength to move on. So many women don't know what to do or how to get help. Especially those who have been beaten into believing they deserve what they get. And married off at 16? I can't imagine!

Thank you for sharing her courageous story! She is a true inspiration!

Thank you, flchen1! From your lips... LOL And at least my twists and turns were an interesting adventure! I am thankful for that!

Thanks for stopping by!
Shayla

Hiya, Paris! Life should be a journey that leaves us breathless! LOL

Katsrus, thank you! Hanging around with Elle and Delilah is an adventure unto itself! *cackle*