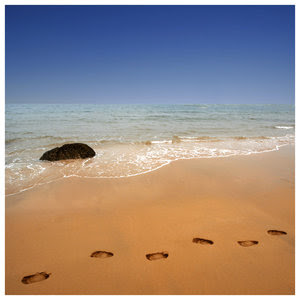 Today I laid down another footstep on the great pantheon of time. I've turned fifty. I refused to accept it, but I could not ignore the reality of it. Self-denial only resulted in self-delusion. I how have passed five decades of history, a half-century. I feel like a walking history book.

Looking back on my life I immediately recognize the milestone birthdays. I could focus on each birthday, but fifty is an overwhelming accumulation. Instead, I mark my growth and maturation by the tens: my 10th, my 20th, my 30th birthday and so on. These are stages most everyone must pass; I now am blessed with having more than most.

My tenth birthday marked a settling period of my childhood. Through family trauma that Jerry Springer would love to exploit, I was passed through many families. Finally, at age seven, I was adopted, leaving behind three mother figures and four father figures. And at age ten I had now remained in the same household for well over two years, far longer than any previous stop.

At age ten I was in fifth grade, under the instruction of Mr. Niedermeier, my all-time favorite teacher. His response to any question of mine was to pull me aside and say "Let's find that out together". My grasp of science blossomed and I gained the courage to take, (and succeed in), high school algebra and English literature classes that year.

Come twenty I had let my intelligence turn me into a social disaster, a smart-ass that antagonized all and everybody equally. The common belief about me was that I'd get cut down a measure or two, and I did. My twentieth birthday was "celebrated" at the Navy boot camp in Orlando, Florida. As a special "gift" the Navy had arranged for our platoon to have a guest drill sergeant, a salty old Marine who had no patience and little appreciation for Navy recruit. In its infinite wisdom the Navy thought this experiment would foster better Navy-Marine relations; in reality it only provided a vent for the jarhead's frustrations. I couldn't keep my mouth shut, and my opinions and wisecracks were quickly redeemed for marathon sessions of sit-ups and push-ups. I came away severely chastened and much more willing to use my two ears than my one mouth.

At thirty I had come to realize how narrow my perspective on the world was, as well as how limited my knowledge. I stepped out in ignorance (perhaps), or in thirst for learning and got myself into The University of North Dakota. Thankfully my excellent scores on the ACT and SAT tests allowed me to become a freshman honors student, and I was given the freedom to learn at my own pace. Looking back, I can say my two years in school there were the most satiating experience I had, as I gobbled up class material voraciously.

But this time was also where I started to become so critical and cynical about the generation coming up behind me. I saw kids 12 years younger than I, freshly-released from family life, and unable to cope with the basics of life. Mom had always cooked their meals, now these kids couldn't even make macaroni. Dirty clothes accumulated in the dorms because young lads didn't know how to do laundry. The first classes of the morning were poorly attended because junior couldn't get himself out of bed.

My fortieth birthday was a benchmark for me for I spent the day at a new job, one which I would work at for the next nine years without missing one day. It was a bit of a lonely birthday, for I had no significant someone to share the day with, as most everyone else did. But I compensated by devoting myself even to my work as a convenience store manager. Daily I'd have over a hundred customers come in, almost all regulars. Didn't their presence each morning make up for the lonely nights ? At forty I also discovered how mortal I was, when a case of pneumonia resulted my needing cardiac-shock to survive. And, if that wasn't enough, I discovered I had diabetes and high blood pressure. It was blatantly evident that the old plumbing within was having problems keep up with my lifestyle.

And now I turn fifty. The job I had at forty went up in smoke at age 49. Nine years of loyal service rewarded me with nothing, for even that employer no longer exists. Resultant of that permanent job loss, I've been homeless and jobless, drifting from town-to-town, seeking solutions. In the last six months I've seen more about the harsh realities of life than in all my life preceding. Stereotypes and biases I had held dearly have been turned topsy-turvy. My blinded eyes have been opened to what is really going on around me and I have gained much in discernment. I prioritize better and appreciate more fully that which I do have. And I've become quite resourceful out of sheer necessity.

Looking back on the footsteps of my life, I recognize that I don't share in many things common to most. I've not been married, I haven't had kids. Because of choice, I am still a virgin. I haven't had a divorce. Even within Ginger's Group I am a minority, having yet to get a book published. But I see ahead that the footsteps through my life have blessed me uniquely to combine my writing ability with life experiences. The result may be that I can then share a journey for others to travel, without having to face the hardships firsthand.

Each of us has a unique journey we've traveled, and we bless others when we put those experiences on paper and share. May you be so motivated to share the Footsteps Through Time" that you have set in place along the way.

A Note from Lisabet: I first "met" Greg on author Ginger Simpson's Yahoo group, where he has shared his life, his thoughts, and some wonderful writing. I'm honored to have him as my guest today, especially since it's his birthday. May the future bring you many blessings, Gregory!

Happy Birthday Greg! Thanks for sharing your story with us. Best wishes to you.

that was beautiful...wow
just wow
and Happy Birthday

Welcome to Beyond Romance, Greg!

Thank you for sharing your story. Happy Birthday!

Happy Birthday! I loved your story. Go Navy...I went to Boot Camp Orlando the last year it was open in 1993. I too had a wicked mouth but was adored more than punished. :) My charming personality no doubt lol!

Greg,
This post is just further evidence of your talent as a writer. I realize times are very tough for you, but what better way to lose yourself than through authoring a book. You have what it takes, and after reading your offering today, I'm more than ever convinced that you should tell your life story in a non-fiction book. You're an inspiration and a blessing, and I'm grateful for the day you sought membership to my group. I've learned a great deal from you, and you didn't even know you were teaching, did you? Happy Birthday, my friend, and may this year be the start of happier times to come.

Happy birthday, Greg. Gosh, I've passed my 50th, but I'm not sure I could recount everything I was doing as each decade passed without some serious restructuring.

I'm only 30 and i hope i experience great moments like you have. Good Luck to you in the years to come. Happy Birthday!!

Happy Birthday, Gregory!
Thanks for sharing your story.

Happy Birthday, Gregory! As I get older I realize how much my past has shaped me into who I am. I've been blessed and, looking back, wouldn't have missed the experiences I've had. Hated going through them at the time. You have an interesting story to tell. Tell it!

Hi Gregory,
Happy birthday and greetings from Australia.
Thank you for sharing your story. You are a gifted writer and I do hope that you will go on to publish a book. A wonderful blog and I agree with everything Ginger said about you.