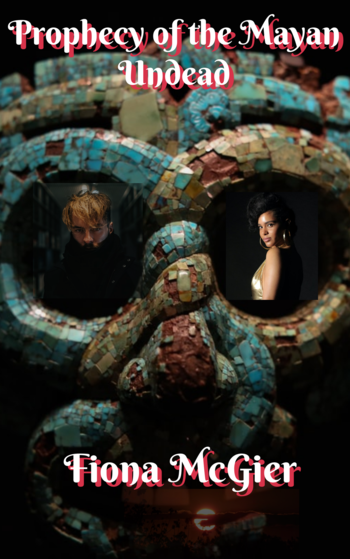 Prophecy of the Mayan Undead by Fiona McGier

Brilliant neurobiologist Keesha Brown is running for her life, though she doesn’t know who she is fleeing from, or why. All she knows is that they always seem to be one step ahead of her. She wakes up to find herself tied up in the trunk of a car driven by two thugs. Though her agile mind still searches for a way out of her dilemma, she fears her time is up. Then all hell breaks loose. A hero appears and crushes her abducters, but not before they shoot and fatally wound her.

Century-old vampire Yuri Kozakov has been cultivating an intellectual relationship with the dedicated researcher; he hopes Keisha can answer his questions about his own origins. Meanwhile he finds the feisty dark-skinned beauty stirs him in distinctly non-intellectual ways as well. When she fails to arrive for their first real date, he realizes she must be in trouble. He manages to track her to lonely country road and to destroy her kidnappers, but it’s too late to save her. His only option is turn her into a creature of the night like he is. On the verge of dying, she accepts his offer of eternal life as a blood drinker, experiencing an ecstatic, arousing communion with her handsome savior.

This is how Fiona McGier begins her novel Prophecy of the Mayan Undead. If you think this sounds like your typical vampire erotic romance, think again. Ms. McGier happily shatters all the Twilight-engendered stereotypes and tosses the pieces to the winds. To start with, her heroine Keisha is sassy, opinionated, sexually liberated and so smart she intimidates everyone around her. She doesn’t waste time worrying about her lost mortality, but applies her new powers not only to the scientific problem that has occupied her for years, namely how to increase human intelligence, but also to the puzzle of the vampires’ existence.

Yuri is Norse-god gorgeous and inexhaustibly virile (of course...) but he’s not the brooding, moody alpha you might expect. Indeed, he’s in awe of Keesha, as well as in love with her, and though he’ll protect her with his life, he’s perfectly delighted to let her take the lead, both in her research efforts and in the bedroom.

Together with two far more ancient vampires, long-time lovers Casomiro and Apolinar, they track the origin of vampires on earth to alien beings who visited the Mayan empire centuries before. These aliens transformed some humans, who spread vampiric spores around the earth. The Mayans worshiped the interstellar visitors as gods, turning their need for blood into the foundation of the culture’s cruel rituals.

Mayans? Aliens? Not your usual pseudo-Gothic Bram Stokery! The author is delightfully creative in her mixing and matching of genres. Things get even wilder in the second half of the book, which features a female Chinese vampire who’s also a scientist – looking for ways to make the “human cattle” more docile and stupid. Abused all her life, repeatedly raped and humiliated, Niu Ying has a heart of stone and a bitter, vengeful spirit. Nevertheless, she falls in love with a representative from yet another extraterrestrial species, a highly advanced race who nudge the beings of lesser planets toward greater maturity.

Ms. McGier’s sex scenes between Niu Ying and the blue-furred, laid-back creature outside time called Frank are some of the best parts of this lively book.

Finally he moved away from her, and she watched through barely open eyes as he removed his jumpsuit. All of his skin had the same light blue tinge, but the parts of him that had been under the jumpsuit were also covered in a soft, darker blue fur. Ying reached out a hand to stroke his chest, then her hand moved lower and she grasped the organ that was much wider closer to his body, and thinner further away. There were horizontal ridges, leading to a head that was a knotted ball of veins. It was also responding to her every touch, twitching and moving as she stroked it.

She looked up at his face and saw passion, combined with an infinite tenderness. He crawled up onto the cushions to lie next to her, leaning over to kiss her lips again, as his long fingers began to stroke the skin on the insides of her thighs. She gasped with pleasure, as skin cells that had never been touched sprang to life, and began to tingle and throb.

So what happens next? I don’t want to spoil your fun by telling you too much, but by the time you get to the end, we’ve got visitations from two alien species, a showdown at the United Nations, and a pretty effective attempt at saving the world.

Posted by Lisabet Sarai at 9:25 AM

I've been curious, thanks for the review!

Wow! Thanks so much, Lisabet! One of my friends told me she could envision this book being made into a movie, since she was imagining each scene as she read it. Your review tells me that I achieved my goal, which was to do vampires in a totally different way--yet still have them be erotic! And Yuri will always have a special place in my heart, because he's the only character to come to me in a dream, introduce himself, and encourage me in a new direction, when I was having writer's block after the first chapter of this book.