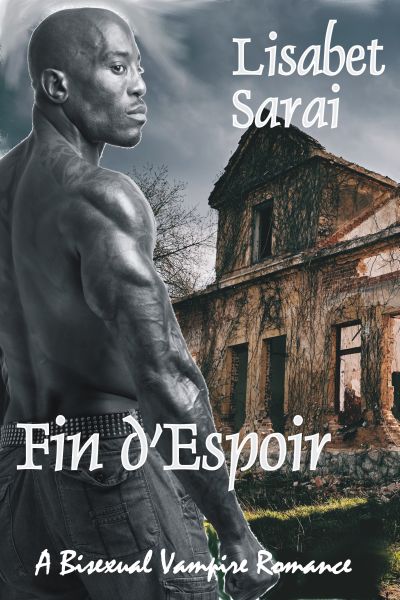 You’ll find an exclusive excerpt and pre-order links below. Leave me a comment and you could win a free copy – before it even hits the virtual shelves!

Bitter and alone, Etienne de Rémorcy haunts the forest around the ruined plantation of Fin d'Espoir. He has sworn to never again taste human blood. Then a fierce storm and a runaway horse bring a slender, raven-haired beauty to his lair. When she begs him to take her, he cannot resist.

Madeleine and Troy hope that a carefree vacation in tropical Jamaica will reignite their faded passion. On a mountain trail ride, Maddy's horse bolts, carrying her deep into the jungle. Injured and lost, she is saved by a giant of a man whose mere presence kindles unbearable desire. By the time she understands his dark nature, it is far too late for her to escape.

When Maddy returns, Troy finds her greatly changed: ravenous in bed, restless and disturbed otherwise. The elegant stranger he meets on the beach holds the key to her transformation - and soon has seduced Troy as well.

Tortured by his conscience, Etienne is determined to set the young couple free. But their love may be his last hope for redemption.

Note: This book was previously published by Totally Bound under the title Fire in the Blood. It has been edited and updated for this release.

Maddy wrestled with her shirt, which clung to her damp skin as she tried to draw it over her head. Her shorts were even worse. The fabric stuck to her skin, clotted with dried gore from the laceration on her thigh. When she pulled, the scab came off with the garment. Blood welled up from the newly-opened gash.

Her host wheeled around, so quickly she felt the breeze across the room. He stared at her, his nostrils flared, a wild light in his eyes. “You are bleeding,” he choked out at last. “You did not tell me that you were wounded.”

“I don’t think it’s serious. A scrape from a tree branch. Not deep. My ankle hurts much more.”

“Let me look at it.” He was at her side in an instant, on his knees. She hadn’t seen him move. He gazed at the ruby drops seeping from the cut. His big hands clenched into tight fists. His full lips became two narrow lines, pressed together as though he was trying to hold something inside.

Maddy placed her hand on his cheek, touched by his obvious distress. “It’s okay,” she said, not really knowing what she was talking about. “Don’t worry.” His skin was cool as the night air, smooth as river stones. Pity and lust washed over her in alternating waves.

“It could become infected,” he murmured finally, seeming to have won some battle. He rose and brought an unlabeled bottle from a shelf along the wall. Golden liquid sloshed inside. He splashed it liberally over the wound.

Maddy gasped at the sting.

“Rum,” he said. “Here in Jamaica we call it liquid fire. The spirit of the cane burns away the sorrow and desperation in men’s souls.” He held the bottle to her lips. “Drink. It will warm you and give you strength.”

The liquor seared her throat as she swallowed. Heat coiled in her belly. He tilted the bottle and she gulped another mouthful, eager for the sweet burn. She reached for his hand, wanting still more. The coolness of his skin only fanned her fever.

“That is enough for now.” He returned the bottle to its shelf, wiped his hands on his pants and disappeared out the door of the shack.

“Where are you going?” Maddy called. “Wait!” But he was already gone.

She tried to stand. Her head spun in dizzy circles and her ankle wouldn’t bear her weight. She sank back onto the bed, frustrated, frightened and confused. Surely he hadn’t carried her all the way to his cabin only to abandon her. She rummaged in the pocket of her shorts for her phone. The battery was low. There was no signal in any case.

Troy. Where was her lover now? What was he doing? Were there men combing the hills, Troy leading them in their search for her? She summoned a picture of him, tanned and golden-haired, with his laughing green eyes, his cupid’s mouth and his lean body. Was he lying awake, missing her?

The image dimmed, became brittle and colorless. A gust of roses swirled around her. She heard the clank of metal on metal. Her captor entered, carrying a galvanised iron washtub in one hand and a five-gallon bucket in the other. “In the old days, we used this for making soap. But it should serve well enough.” He dragged the tub close to the bed and dumped in the contents of the bucket, then fetched the kettle from the fire and emptied it in as well. “Your bath, girl. You smell like your horse.”

Maddy’s cheeks burned. The stranger showed no inclination to turn his back again. His eyes were live coals, kindling insane desire in her traitorous body. Awkward and aroused, she reached behind her back to unclasp her bra. Under his unflinching gaze, her nipples hardened into rosy knots that screamed to be touched. She hooked the waistband of her sodden panties, but she couldn’t remove them without standing.

“Let me help you.” He was suddenly beside her, with no transition, holding her elbow and bearing her weight while she stepped out of the sticky garment. She caught a whiff of musk rising from her exposed pussy. She heard him inhale sharply, and knew he smelled her, too. The notion made her wetter still.

He didn’t release her. She felt the distinct pressure of each of his fingers, gripping her far tighter than was necessary. Yet she understood that he was holding back. His strength was the most potent aphrodisiac she had ever encountered. She wanted to sink to her knees before him, to offer herself, no, to beg him to take her. At the same time, she couldn’t move. She stared down at her flushed breasts, unable to meet his eyes.

“Step up,” she heard him say. His voice was brusque, impatient. “Lean on me.” With some clumsy co-operation from her, he lowered her naked form into the tub. “Now clean yourself. I will return soon.”

He tossed a rectangle of rough cotton onto the bed where she could reach it and was out the door once again before she could say a word.

Don’t forget to leave a comment. You could be my winner!

This sounds amazing. thanks
debby236 at hotmail dot com

Definitely a cliffhanger there!

Ooh! Another hot one--and so timely, this being the month of Halloween and all creatures of the night! Yummy!

I was hooked just looking at the cover, but I still read the excerpt! I definitely would not mind reading this one.
lringel at comcast dot net

This sounds amazing, I'd love to read it!!!

Thank you for sharing. I like how he takes care of her.
(click on my profile for email)

Congratulations to Chucosgirl, who is my randomly chosen winner.

Unfortunately, you didn't leave your email. I'm hoping you are on my VIP email list and that I can find you...!

Can't find her. So I'll choose someone else... Hey, Fiona! Random.org says you get the book!

Yay! I really want to read this one--hot vampire, hot sex--possible redemption, after many hot, steamy scenes? What's not to like? Thanks!