The Truth Behind the Tiger – and a Giveaway!

We’ve vacationed several times in Playa del Carmen, south of Cancun. It’s a fun tourist town with fabulous shops and restaurants, and of course those gorgeous Caribbean beaches. Cruise ships pop in and deposit visitors, too, so the locals all vie for those tourist bucks.

It’s pretty common to see a dude with a huge iguana, offering to let people pose with the lizard for a little cash. The great big reptiles are a little off-putting, but they’re also all over the place in Mexico. We saw them sunning on ruins and slipping through the shrubbery.

Less commonly, vendors would have other, more exotic photo ops: baby monkeys, jaguars, and tigers. There would be a poster offering an explanation, something to the tune of “Poor little orphan, found and lovingly tended by this caring individual.” Except that’s rarely, if ever, the case. Many people believe the young, non-orphan animals are captured in the wild to be displayed while they’re manageable and cute. When they get too big to be useful, they’re killed or kept in cages as status symbols for the rest of their lives. It’s not a happy situation for the animals, any way you cut it.

Here’s an article about the controversy http://www.buyplaya.com/blogs/rob_kinnon/archive/2013/04/12/news-in-the-fight-to-keep-exotics-off-of-5th-avenue.aspx and a forum discussion as well. http://www.tripadvisor.com/ShowTopic-g150812-i23-k5382243-o50-Please_don_t_pay_for_photos_with_the_tigers_jaguars-Playa_del_Carmen_Yucatan_Peninsula.html

As with just about everything, there are two sides to the story. I get that people need to eat, and I do value people more than animals. The practice gets food on tables for people who might not otherwise have it, and yet… I don’t like it. I want it to stop. So, we refrain from interacting with and giving money to the animal handlers when we travel. When the opportunity arises, we encourage others to do the same, in the hopes that people will decide it’s not worth the bother to capture a jaguar cub for tourist snapshots.

In The Curse of the Tiger, a witch runs a roadside exotic animal zoo next to her gas station. She buys some of her animals, but has more unsavory means of procuring exhibits, too. True to her witchy nature, the animals are kept in deplorable conditions. The animal abuse theme in “Curse” is light handed, but it’s definitely there.

Thanks so much for stopping by, and many thanks to Lisabet for inviting me over. 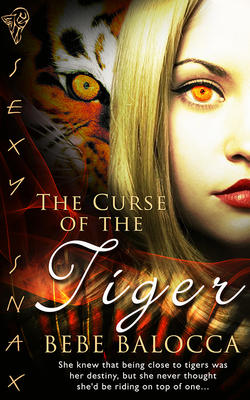 She knew that being close to tigers was her destiny, but she never thought she'd be riding on top of one…
Faline Hopper owns and runs a free-range tiger refuge in northeastern Colorado. She loves the animals and the mission of Kat’s Crest, but the sanctuary is on the verge of financial disaster. A mysterious stranger with deep pockets comes to its rescue.
Hunter Cartwright is one tall, cool drink of Alabama water. Sparks fly immediately when he shows up at Faline’s door. He’s ravenous for the blond beauty, but there’s something he needs to make Faline understand before he can really sink his teeth into her.
Something that happens at sundown, when the tigers roam the sanctuary and the nightly hunts begin…
The curse of the tiger was cast by a Native American witch. Abetzi rejects the Great Spirit and worships a powerful demon instead. Faline is determined to free Hunter from the witch’s spell and to stop Abetzi from abusing exotic animals, but at what price?
Will Faline risk everything to put a halt to Abetzi’s cruelty—And will it be worth it?

Faline threw the door open when he knocked. Hunter guessed by her wide smile that she’d assumed that one of her workers had returned. “Oh, hi,” she said, her buoyant smile replaced by a slightly abashed expression. “Hunter, right? Come on in.”

He nodded, running his eyes up and down her slim figure. Still in her sweatpants and hot pink tank top, Faline’s body was athletic, toned and lushly curved, and her hair was a tantalising blonde mop of bedheaded perfection. How many days had he gone without being around a beautiful woman? The hag had made his captivity seem like years, but it had been only a matter of weeks. Still, the way the thin ribbed cotton hugged the toned curve of her belly and the tender undersides of her breasts made him want to pounce on her and rip every shred of clothing from her body.

Clearing his throat, Hunter answered with a lopsided grin. “Yes, indeed. I slipped out while you were resting, but I’d like to talk with you about a possible position.” He suppressed a chuckle. I’d like to talk about having you positioned on your stomach with your legs spread wide…

“Oh, yes,” Faline answered. “Honestly, hiring someone new hasn’t been a remote possibility for some time, but it seems our situation has changed a great deal.” Her hazel eyes sparkled. “What sort of position were you considering?”

“Oh, I’m open to just about anything,” Hunter replied. “But I’ve had more than my fair share of dealings with tigers. I feel that I have a unique understanding of them.” The scream of a soaring hawk drew his attention to the window. “Be dark pretty soon,” he noted. “Guess those tigers will be up and about, huh?”

“Mm-hmm,” Faline answered. “They hunt at night.” Hunter felt her gaze on him and knew that she was both intrigued and wary about the stranger in her home.

“I don’t need any money, so you don’t need to worry about that. I’d just like to volunteer my services and let you decide how best to use me.” Hunter let his eyes wander down to her slim, tanned neck. She looked so vulnerable and sweet. He imagined that she’d taste of honey and salt. He wondered if she was even stronger than she looked—would she enjoy grappling with him while they made love? That could be, he thought, incredibly fun. His cock began to swell and stiffen inside the coarse fabric of his blue jeans.

“I will need somewhere to stay, though,” he murmured, and took a step toward her. “Maybe we can work something out between us.”

“Oh, um,” Faline stammered and licked her lips. “We could talk about your options, I suppose. I’d say I probably do have a place for you, now that you mention it, seeing as you’re comfortable with tigers.”

“I don’t know if ‘comfortable’ is the right word.” He took his hand in hers and brought it to his lips. “’Experienced’ is better, I think. I’d say I’m pretty experienced.” He pressed his lips to her knuckles and watched for her reaction. “Would you say that you’re experienced, too, Faline?”

I live in a teeny-tiny town in the southeastern United States, surrounded by rolling hills and lots of cows. My house is brimming with my rowdy sons, hot husband, and more pets than I can shake a stick at. When I close my eyes, though, I’m in a white stucco villa on the Mediterranean, sipping red wine and watching the turquoise waves crash at my feet. Next to my hot husband, naturally.

I like having some serious issues within any books. Make you think a bit more.
edbby236 at gmail dot com

Sounds excellent, I'll need to add this to my to-read list.

Its really sad that these animals are not respected for the treasures that they are. I always feel so guilty when I go to a zoo or see a picture I like of a wild animal; because on one hand I want to know how they live and just see how lovely they are but at the same time I want them to be able to enjoy the life they have and the freedom they should have. It's such a double edge sword because I think (like with most things) that people should know and educate themselves about the world around them but sometimes learning that encroaches or even violates the life of what we are trying to learn about.

Welcome to Beyond Romance! Thanks for sharing a bit about the book's background, and for your generosity in offering a copy to my readers.

Thank you so much for having me here, Lisabet! It's a real honor and pleasure to visit your blog. And thank you for your thoughts, Debby and Rachel. I totally agree with both of you. I did research for another job recently about the lives of whales in captivity, and it's a terrible thing. Their life expectancies in captivity are much shorter, they have health problems they don't get in the wild, and they seem to exhibit depression. I'll never look at trained killer whales the same way again. So yes, humans get educated and learn to appreciate these animals when they see them up close, and possibly better protect their natural habitats as a result, but it's not a good thing for the individual animals in the parks. A double edged sword for sure.

Good luck with my giveaway! :)

Thanks for the great post! I don't mind if there are serious topics as long as it flows naturally with the story.

Life's complicated, why wouldn't our characters and plots reflect that?

I absolutely adore this cover! What am awesome read! Can't wait to check it out!

Hello Bebe & Lisabet,
Thank you Lisabet for hosting Bebe Balocca as a Guest Blogger on Beyond Romance.
Thank you also Bebe for sharing your new paranormal romance release, "The Curse of the Tiger" with Lisabet's Fans. I very much enjoy when Lisabet brings us new Authors, like yourself, especially an Author with such an intriguing Book as your posted Excerpt shows & your Beautiful Cover Art. I'm LQQking forward to reading Hunter & Faline's Story.

the curse of the tiger sounds hot and the excerpt was great SIGN ME UP .

Depends on what the topics are

I like when a story has something to share with the reader... as long as it goes with the flow of the book I do not mind issues being brought to light... little lessons and facts bringing things to my attention... Thanks for sharing with us today... really liking the sound of your book! Congrats on its release!
greenshamrock AT cox DOT net

All righty, I just plugged the numbers 1-11 into the random number generator at RANDOM.ORG - because I am NOTHING if not high tech - and it gave me number 9. Which means that helene, YOU are the lucky winner of a copy of my book! I'll send it to your email address. And thank you so very much to everyone who commented. I hope you have a wild and wonderful weekend! :)

Annnnddd, actually I think I need Lisabet to send her an email from her account. (Sort of regretting my high tech comment above, lol) Helene, if you read this, please email me at bebe(dot)balocca(at)gmail(dot)com. :o)