We’ve all met the type right? Tall, dark and devastatingly handsome. They exude sexiness in everything that they do. Whether it’s their walk, their touch, their voice or heaven help us, their scent. We can’t help but be drawn to these men.

Unfortunately they have a dark side. They are cocky and unbelievably arrogant. They subscribe to the old caveman like stereotypes where they hoist the woman over their shoulder and carry her off to ravish her on a bear skin rug. They’re also the exact type of men who will order our dinner for us with a nod and wink rather than allow us to choose for ourselves. Everything about them is overbearing and drives us mad. Yet their bedroom eyes and seductive ways almost always make us fall for them.

Now before any of you protest too much and insist you could never be so easily swayed by a man with such gall, let me tell you exactly who it is I’m referring to. I’m not talking about our mailman or the guy who smiled at your at the restaurant last night. I’m talking about those Heroes we read out in romance novels. I’m sure we have all read a book at least once which portrayed a man who we would never put up with in real life, yet when he comes to life amidst the pages of a novel we find ourselves weak in the knees and so jealous of his heroine for being the one swept up into his arms.

What I’m wondering is, what is it about cocky arrogance mixed with a deliciously sexy man that we can somehow manage to forgive those faults in him for the benefits he otherwise provides his leading lady? Have any of you read a book and thought, ugh what a jerk! And pages later you found yourself thinking, oh my, he is utterly delightful! LOL

If you’ve been fortunate enough to be transfixed by one of these Heroes who defied all rules of what we normally look for in a man, leave me a comment below and tell me who this hero was, what book he came from and which author brought him to life. Don’t be shy either. Let’s face it, no matter how sweet we are, we all have a bit of a penchant for the bad boy.

Beck and Call by Nicole Morgan

All Jenny wanted was to run her resort hotel without the constant interference from her boss. All Beck wanted, was her.

Jenny Somers is the General Manager at a resort hotel in the beautiful Caribbean. She loves her job, but she hates her boss. Constantly cutting corners to meet budget constraints she finds herself doing handyman work just to keep the hotel running.

Beck is a drifter who comes to Jenny’s rescue during a plumbing emergency at the hotel. He is arrogant, cocky and absolutely everything that Jenny despises in a man of his type.

Together Jenny and Beck find out just how real the term “opposites attract” is, and along the way find something that neither of them were expecting. 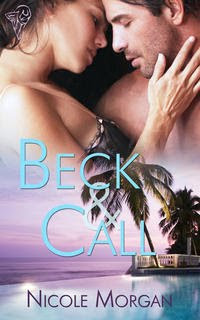 He was watching her. She could tell he liked it. She noticed a small bead of sweat on his forehead that she would lick off if he was close enough. He was holding her thighs apart and hadn’t deviated from his rhythm for several minutes when she felt him do just that. His pace slowed and he released one of her thighs from his strong hold. She was disappointed. What he was doing had felt so good. She didn’t want him to stop. Not for a second. He slid his hand up towards hers in what she thought was going to be a playful massage of her breast, but instead he surprised her when he pulled her hand away.

“Beck? What are you doing?”

She asked the question, but if she had waited the answer would have been clear. He took her hand down to where their bodies were connected and placed it on her saturated clit.

“Rub yourself, Jennifer. Touch yourself. Let me watch you.”

His voice. Again, his voice sounded deep and hypnotizing. Was there anything he could ask of her she would not do? Without hesitation she spread her lips further apart with her index and ring finger. Her eyes were locked on his as she flicked her middle finger across her swollen clit.

She gasped. The sensation was more than she’d expected. Something flashed in his eyes and his jaw clenched. She loved knowing she was driving him crazy. Wanting to make him just as hot as he did her, she continued to play with herself as he watched. He was still buried deep inside her and the feel of being so completely filled while touching and teasing her sensitized nub was like nothing she’d ever experienced before.

Her eyes widened at his demand. Taste myself? She had never done anything like that before. How could she… As quickly as she’d asked the question she realized the choice was no longer hers. Beck pulled her hand away and raised it to her mouth.

“Suck your fingers, sugar. Lick all your juices off for me while I watch.”

Oh my God! She couldn’t possibly. Hesitation washed over her when her scent tickled her nose and her taste hit her tongue. She liked it? She wanted to question how it was possible, but instead found her lips closing over her fingertips. Unconscious moans escaped from her as she did exactly as Beck told her to, licking and sucking on her fingers.

Nicole wants her writing to inspire you, the reader, and open your heart to feel the same things the characters are going through.

While still trying to stay true to her style, she is finding her writing is evolving as she takes on new and uncharted territory for her. There are many areas of erotica out there that she hasn’t had a chance to really delve into and is anxiously looking forward to doing just that.

I'll admit that I've written one or two arrogant heroes in my time, though most of my guys don't fit that mold. When I do have a cocky hero, though (like in Ruby's Rules) he usually ends up getting his come-uppance!

Thanks so much for having me, Lisabet. I think it stems from that bad boy we can't resist in high school and just grows from there. :)

Thanks for the post and for the excerpt. I'll add this one to my wish list. lisagk(at)yahoo(dot)com