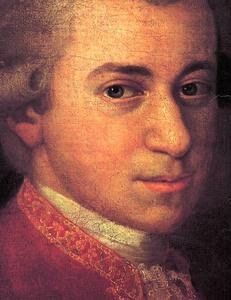 Today is the 256th anniversary of the birth of Wolfgang Amadeus Mozart, one of my favorite composers. From the flighty nonsense of The Magic Flute to the somber power of the Requiem, Mozart's music never fails to astound and delight me. Every note seems so easy, so perfectly inevitable, and yet there are intricacies of structure that I, as a non-musician, can only appreciate intuitively. I've read that both musicians and singers had a terrible time dealing with the complexity and difficulty of his mature operas. And yet to the listener, the music is immediately accessible.

Of course, everyone acknowledges Mozart's genius - he won great acclaim even during his own lifetime - yet that didn't prevent him from great poverty and hardship. He's a fine example of the fact that artistic brilliance doesn't necessarily translate into financial success. I guess I have no reason to complain.

I find other lessons in his work, too. Mozart wrote to primarily to entertain. At the same time, his operas, his symphonies and his liturgical work, especially, have a depth, a seriousness, that belies the speed and facility with which he composed them. Perhaps my favorite of his operas is Don Giovanni. It's generally categorized as a comic opera, and yet the final scene, when demons appear to drag the philandering adventurer down to Hell, has the intensity and drama of a tragedy.

I'd love to write this way myself, to produce stories that sweep my readers into a world of pleasure and at the same time, say something serious about life, love, faith, and fate.

Of course, I'm not intending to compare my skill with his, even though I began writing almost as early as he began composing. Why not aspire to the highest level of achievement, though? I doubt that anyone will remember me or my birthday, two centuries down the road. But perhaps I should write as though that was a real possibility.

I have many "Mozart memories", but possibly the fondest recollection is the performance of Cosi Fan Tutti my husband and I attended in the magical city of Prague. We'd bought tickets that morning, but almost didn't make it to the theater because somehow we managed to get on the wrong trolley and traveled ten miles into the suburbs, in the opposite direction from town, before we realized our mistake. We squeaked in just minutes before the curtain rose, tired and sweaty and anxious. Mozart carried us away into a different world entirely. The Prague opera house, all curlicues, gilt and red velvet, provided the ideal setting for the composer's tongue-in-cheek tale of female inconstancy. It felt like a dream, to be there in the city that treated the young prodigy far better than his home town of Salzburg, and which still claims him as its own, drinking in some of the glorious music ever created.

To be able touch others with one's art in that way - what a gift! And so, I celebrate the 27th of January, grateful that Wolfgang lived his short thirty five years on earth and humbly hoping to contribute even one thousandth the amount of joy with my own work.